The two talked at length about their shared vision of a resurgent Largo/Landover area brimming with new facilities and the legislation they co-championed during this year’s General Assembly session to make some of it possible. They also expressed confidence that the U.S. General Services Administration will decide later this year to build a new FBI headquarters in Prince George’s.

A measure that Hogan (R) signed on Tuesday, House Bill 897, authorizes the Maryland Stadium Authority to oversee construction of $400 million in community amenities, including a live music amphitheater, a market hall, a civic plaza, a library/cultural center, and a basketball and volleyball field house.

The facilities would supplement efforts already underway — including the new University of Maryland Medical System hospital on Harry S. Truman Drive — to create a sense of place in a historically underdeveloped part of the state’s second largest county.

A Prince George’s real estate developer and broker before re-entering politics a decade ago, Hogan (R) has embraced Alsobrooks’ vision of a thriving Blue Line Corridor. His team worked closely with hers this session to guide a series of funding measures across the finish line, resulting in what Alsobrooks called a “record” $2.5 billion in state aid.

“We share a home town,” Alsobrooks (D) said of Hogan, the son of a former county executive. “We are so proud to be able to bring home what we believe will be transformational economic growth and long-awaited entertainment and amenities for our residents.”

“It’s going to be a real game-changer for Prince George’s County,” said Hogan, who grew up in Landover Knolls. “It’s going to bring more jobs and more economic development to the neighborhoods right here where I grew up.” 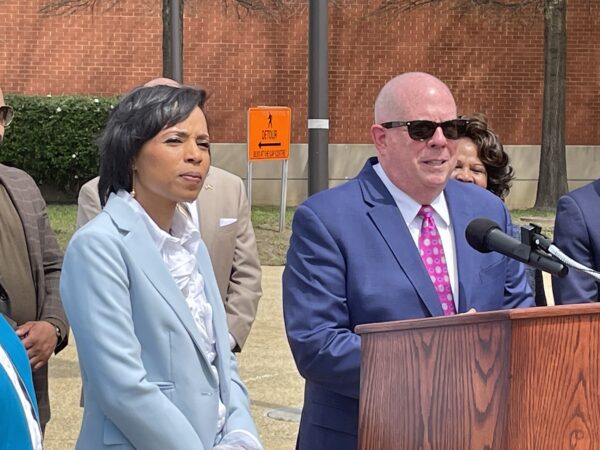 The governor and county executive stressed repeatedly that the vision of a Downtown Largo, which launched under Alsobrooks’s predecessor, gubernatorial hopeful Rushern L. Baker III (D), will advance regardless of whether the Washington Commanders build a new stadium nearby.

Nonetheless, reporters peppered the two with questions about the many controversies swirling around the team and its beleaguered owner, Dan Snyder.

On Tuesday, the Washington Post reported that the team “may have engaged in a troubling, long-running, and potentially unlawful pattern of financial conduct,” allegations that include withholding as much as $5 million in refundable deposits from season ticket holders and hiding money that was supposed to be shared among NFL owners.

The paper reported that a congressional committee investigating the team sent a letter to the Federal Trade Commission, asking the agency to probe allegations from a former team vice president that the Commanders kept two sets of books, “including one set of financial records used to under-report certain ticket revenue to the NFL.”

The Post report comes amid separate allegations of a hostile work environment and the possible abuse of cheerleaders.

On Tuesday, longtime columnist Sally Jenkins opined that “only the crookedest pol” would “stand on a dais with Washington Commanders owner Daniel Snyder for a stadium ribbon-cutting ceremony and assure constituents that they will get fair returns and not be fleeced.”

“There can be no stadium funds — no tax-free bonds, not so much as a discount on sewer lines — until Snyder has turned over every sticky page of his ledgers,” Jenkins wrote.

Nearly all of the questions reporters lobbed at Hogan and Alsobrooks dealt with the Commanders, with many focusing on whether the growing stench around Snyder’s conduct complicates efforts to keep the team from leaving.

“This transcends football,” Alsobrooks insisted. “We are concentrating and focusing on the people who are here.”

“Today really is not about the Commanders,” she added. “We want them here but more than anything, we want Prince Georgians to thrive.”

Last month Hogan appeared to express irritation with the team, accusing them of playing his state, D.C. and Virginia against one another in search of the best deal. Maryland will not enter “a bidding war,” he pledged, adding that if team thinks it can do better in Virginia, “I would say good luck.”

Speaking alongside Alsobrooks, the governor said he is “very concerned about the reports we’re hearing out of congress about some of the potential wrongdoings.”

“I’m not sure it has a whole lot to do with what we’re announcing here today,” Hogan added, “because none of this money has much to do with that stadium. It has to do with rebuilding these communities.”