A week before George “Walter” Taylor, a firefighter in Maryland, was diagnosed with metastatic neuroendocrine cancer, he attended a conference in Indianapolis that discussed the dangers of perfluoroalkyl and polyfluoroalkyl substances, or PFAS, a cancer-linked chemical that is commonly included in firefighter foam and protective gear.

“How crazy could that be — that a week later, we would take him to the hospital for what we thought was appendicitis, but ended up being metastatic neuroendocrine cancer,” said Christine Taylor, Walter’s wife.

Walter, who served as a firefighter for 31 years, died at 46 on Memorial Day 2020. An autopsy revealed that he had cancer related to occupational exposure, said Christine, a nurse, who comes from a family of firefighters.

Her brother is the battalion chief for the Naval District of Washington Fire Department at Naval Air Station Patuxent River in St. Mary’s County and her father retired from the same fire department.

“I understood what I was getting into before I got married. [Walter’s] first love was the fire service and I accepted that,” Christine said.

They had planned to renew their vows on their 20th anniversary the day after Walter passed away. 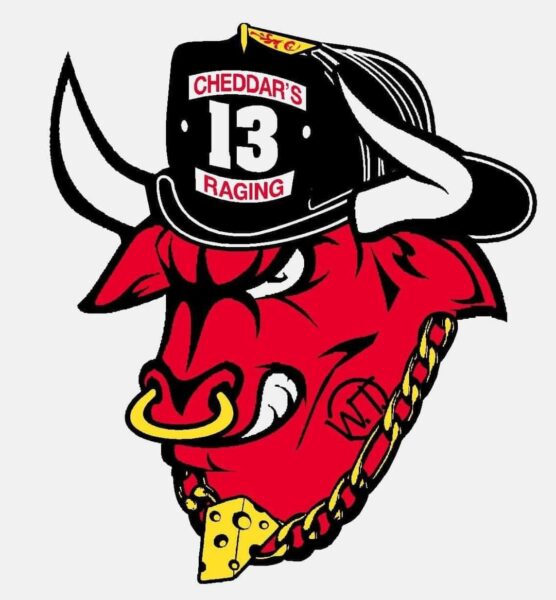 Walter also worked 20 years at Patuxent Naval Air Station’s fire department as a firefighter and fire inspector until his death. During the last two years of his life, post-diagnosis, Walter was also a safety officer at the Solomons Volunteer Fire Department and Rescue Squad, Christine said, “making it his mission to make sure everybody understood the inherent dangers” of carcinogens and PFAS.

His friends called him “cheddar” for his love of cheese, and as “he fought like there was no tomorrow” through his cancer, his nickname became “cheddar’s raging like a bull,” Christine said.

The family’s fire-fighting tradition continues, as Christine’s daughter, Kayla, 21, and her son, Justin, 16, are volunteer firefighters in Southern Maryland. Her youngest daughter, Mackenzie, who just celebrated her tenth birthday, told her mom that she also wants to become a firefighter. 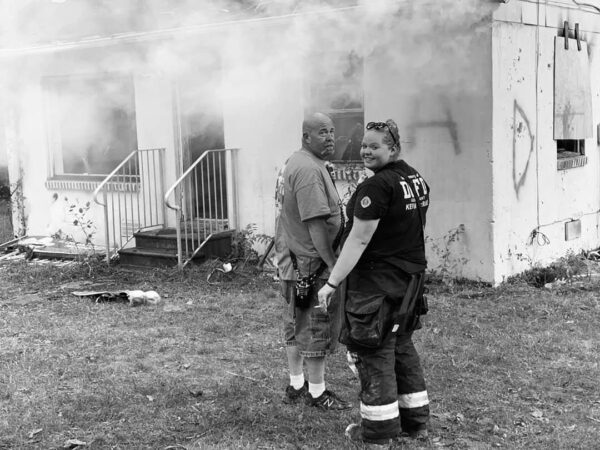 George “Walter” Taylor on a house burning drill with his daughter, Kayla, who is a volunteer firefighter at Solomons Volunteer Rescue Squad and Fire Department and a member of Leonardtown Volunteer Fire Department. Courtesy photo from Christine Taylor.

Justin completed his first fire truck run a year after his father passed away.

For the second year, Maryland lawmakers are trying to limit firefighters’ exposure to PFAS with the George “Walter” Taylor Act.

The bill would ban fire-fighting foam, food packaging, rugs and carpets that contain PFAS. It also would require anyone who sells personal protective equipment that includes PFAS to provide a written notice to the buyer. 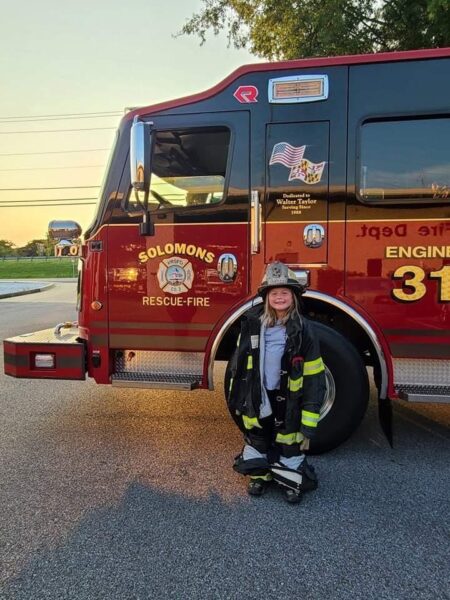 Mackenzie Taylor, the youngest daughter of George “Walter” Taylor, just celebrated her 10th birthday and said she wants to be a firefighter like her father. She is standing in front of a firetruck that was dedicated to her father after his 31 years of service. Courtesy photo from Christine Taylor.

PFAS are found in many household items including nonstick pans, stain-resistant furniture and textiles, but also in firefighting foam and firefighter gear. Because PFAS are resistant to water and grease at high temperatures, many manufacturers have incorporated the chemical into their products.

But exposure to the chemical has been linked to certain cancers, reduced immune system function, developmental delays, decreased fertility and hypertension in pregnant women, according to the U.S. Environmental Protection Agency.

PFAS, a group of more than 9,000 chemicals, are often referred to as “forever chemicals” because they don’t break down in the environment, including in human bodies.

According to the Centers for Disease Control and Prevention, cancer is the leading cause of death for firefighters. And 75% of firefighter deaths are linked to cancer stemming from exposure to a carcinogen at work, according to the International Association of Fire Fighters.

“Each exposure is a drop in the bucket and sooner or later, the bucket just gets full and there’s no more room,” said Jeffrey Buddle, president of the Professional Fire Fighters of Maryland union. “That’s when firefighters start to develop cancer — it’s the cumulative effect over very long careers.” 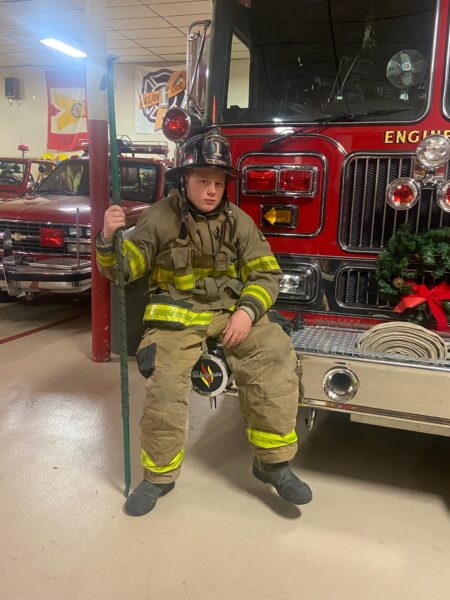 Last year’s bill stalled in committee without going to a vote.

On Wednesday, opponents of a ban told the Health and Government Operations committee that the definition of PFAS in the George “Walter” Taylor Act was too broad, and could lead to unintended restriction of materials used in medical equipment and green energy technology like solar.

“PFAS are not all the same — it’s not appropriate to group them all together,” Robert Simon, representing the American Chemistry Council, told the House committee. He asked them to narrow the definition of PFAS to include only those most relevant to Maryland.

Distributors of carpets, firefighting foam and food packaging are “intermediaries in the supply chain,” not the manufacturer, Maryland Retailers Association President Cailey Locklair told the committee. Those distributors may not know what exactly is in an item they are selling. It would also be a large lift to require companies to test their products for “hundreds of chemistries” that fall under PFAS, she added.

Del. Sara N. Love (D-Montgomery), lead sponsor of the bill, said that narrowing the definition would allow companies to shift one or two molecules in a PFAS chemical to avoid the regulation. Love also reminded the committee that her bill does not ban PFAS in all uses and pointed out that the definition of PFAS in her bill, which is sponsored in the Senate by Sen. Sarah K. Elfreth (D-Anne Arundel), matches definitions the one in other state bans.

At least 13 states, including New York, Maine and Vermont, have banned the use of fire-fighting foam that contains PFAS.

Asked if she was open to delaying the start of the bill to allow manufacturers to adapt, Love said she is open to a two-year delay, as other states have done. However, “any increased timeline is going to continue to expose our firefighters…to more and more of these toxic chemicals,” she said. And retailers such as Home Depot, Trader Joe’s and McDonald’s have already made commitments to phase out PFAS from sales of carpets and food packaging, Love said.

Upper Potomac Riverkeeper Brent Wells said he found “extremely high” levels of PFAS in the upper Potomac River near wastewater plants in Hagerstown, most likely coming from products that people dispose into the sewer system. High levels of PFAS were also found in 75% of community water systems tested in Maryland, according to a report by the Maryland Department of the Environment.

Lawmakers will also consider a bill that would ban the use of mosquito sprays that contain PFAS.

Steve Stockwell, a firefighter at Patuxent Naval Air Station and vice president of the National Capital Federal Firefighters, said he frequently rode the ambulance with Walter and had known him since 2005 when he joined the volunteer fire department. He said Walter had a good sense of humor and pulled some elaborate pranks.

Stockwell said he noticed Walter’s missing presence the most at the Patuxent station gazebo where firefighters gathered during breaks.

“We’re used to having personalities of people around you for so long and you don’t think that’s ever going to go away, especially in the fire service” Stockwell said. He described Walter as a “big and bombastic” guy who sometimes told embellished stories.

Not having a veteran like Walter around impacts the whole firefighter community, said Scott Burkhardt, a firefighter who works in Montgomery County and is president of the National Capital Professional Firefighters..

“His loss has been immeasurable to the fire service as a whole,” said Burkhardt. “We lost an inspector with 20 plus years experience — you cannot replicate that overnight.”

A turn of events with myriad legislative implications.