Maryland policymakers are weighing legal and legislative action to protect abortion access in light of the enactment of a Texas state law that prohibits abortions as early as six weeks — often before people know they’re pregnant.

David Schuhlein, a spokesperson for Senate President Bill Ferguson (D-Baltimore City), said that Ferguson is “alarmed” about the Texas law.

“He is dedicated to protecting a woman’s right to choose and is exploring options to protect that right for this upcoming session,” Schuhlein said in a statement.

Representatives for House Speaker Adrienne A. Jones (D-Baltimore County) did not respond to a request for comment.

But Del. Ariana B. Kelly (D-Montgomery), an advocate for reproductive rights, said that she thinks the time is right for the legislature to move some more progressive policies.

Maryland Attorney General Brian E. Frosh (D) announced last week that he and 24 other attorneys general filed an amicus brief in support of the U.S. Department of Justice’s challenge to the Texas law.

“The new Texas law is designed to terrorize women and their doctors,” Frosh said in a statement. “It puts bounties on their heads if women exercise their constitutional rights, and it puts their health in jeopardy.”

Under the Texas law enacted Sept. 1, physicians are prohibited from performing or inducing abortions if cardiac activity is detected.

Abortions are allowed after six weeks in the case of medical emergencies, and doctors are required to maintain exhaustive records in those cases.

This law is to be enforced by private citizens, who can pursue civil lawsuits against abortion providers and anyone who “aids or abets” access to abortion services — something Karen J. Nelson, the CEO of Planned Parenthood of Maryland, said she hasn’t seen legislated before.

“We’re watching this stuff closely,” said Nelson, adding that every affiliate of the Planned Parenthood Federation — including her own — is “all hands on deck right now for Texas.”

Nelson said that all three Planned Parenthood affiliates in Texas are currently complying with the newly enacted law, “which is making abortion care very, very difficult — and, in most cases, impossible — for patients to access.”

Maryland has its own abortion protections.

Lawmakers passed a bill in 1991 that bars the state from interfering with a person’s right to choose up until the fetus is viable, or able to live outside of the womb. After that, abortions can be performed only to protect a woman’s health or if there is a fetal anomaly.

In 1992, a statewide referendum codified the measure, which added the basic protections from Roe v. Wade to Maryland’s law. That means even if the Supreme Court overturns the 1973 decision, abortion would still be legal in Maryland.

“We have a history in Maryland,” Kelly said Friday. “You’ll hear even … Republican leaders in Maryland saying, ‘Abortion is settled law.’”

But legal challenges have been and are coming for Roe.

On Dec. 1, the Supreme Court is expected to hear the case of Dobbs v. Jackson, which will challenge the constitutionality of a Mississippi law that prohibits abortion after 15 weeks.

“In the next nine to 12 months we could see Roe v. Wade really disintegrated,” said Isabel Blalock, the field director of the abortion access campaign at NARAL Pro-Choice Maryland.

Maryland has 13 independent clinics and two hospitals that offer abortion care services. Some provide surgical abortions up to 22 or 26 weeks.

Nelson said that surgical abortion care is available in two Planned Parenthood of Maryland facilities and medication abortion care services are available at all seven of the affiliate’s offices.

According to Blalock, medication abortions can only be administered up to 10 or 11 weeks.

She also said that protections included in the Roe v. Wade decision have never been enough.

“Choice doesn’t mean anything if you can’t get to an abortion clinic; if you can’t afford an abortion; if politicians are making your experience of abortion care really awful and invading your privacy and… violating your dignity and control of your body,” Blalock said.

Frosh announced Monday afternoon that he joined a coalition of attorneys general calling for the Supreme Court to uphold the protections provided by Roe.

‘It absolutely has a rippling effect’

While she acknowledged that “we are not Texas,” Kelly pointed to a 2021 Guttmacher Institute study that reported that nearly two-thirds of Maryland counties were without an abortion clinic in 2017.

“So what we need to do is make sure that we have enough providers, …that we have high-quality, well-trained providers providing care in Maryland and that that care is affordable,” Kelly said. “So we can pass legislation that works towards those goals.”

In 2019, the late House Speaker Michael E. Busch (D-Anne Arundel) introduced legislation that would have created a ballot initiative to enshrine abortion rights in the state constitution.

Kelly said that she wouldn’t rule out a possible ballot initiative down the line.

But not everyone is in favor.

Blalock said that campaigns to bring about constitutional amendments are “very expensive,” and she believes that “there are other states that that investment can and should be made in” ahead of Maryland.

Some abortion-rights advocates in Maryland are helping people who have to travel from those states for care.

NARAL Pro-Choice Maryland is part of a new initiative called the Maryland Abortion Access Alliance, which seeks to expand care from several angles by providing services like transportation and lodging.

So far, the alliance has served 70 people since this spring from Maryland and beyond.

Blalock also works at a clinic in Montgomery County on the weekend. In a phone call on Monday, she said that she had just counseled her first patient from Texas.

“I just think that’s astounding given the number of clinics that are between … Maryland and Texas,” Blalock said, “But it absolutely has a rippling effect and we need to begin investing in our providers and putting in place measures to uplift and support our network.” 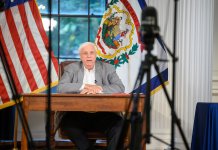 Governors Weigh in on Western Counties’ W.Va. Plea, as Maryland Lawmakers Back Away from Issue