Wes Moore has picked up a major endorsement in the Democratic gubernatorial primary: Anne Arundel County Executive Steuart Pittman (D) will announce Wednesday that he is backing the author and former nonprofit CEO.

The two are scheduled to appear together in Annapolis on Maryland Avenue and State Circle, just across the street from the State House. Pittman becomes the first county executive to endorse in the nine-candidate Democratic primary for governor.

In an interview Tuesday, Pittman said he hadn’t intended to back a gubernatorial candidate before the June 28 Democratic primary, but came away convinced that Moore can be a transformational figure who understands the struggles of everyday Marylanders and will be able to address the state’s myriad challenges in creative ways.

“A governor doesn’t have to just be good about governing,” Pittman said. “He has to be able to end the divisions in our country and state and in my county. And I believe Wes has a real ability to bring people together.”

Pittman added that he was impressed by Moore’s anti-poverty work and his fluency in financial markets, a combination that he said makes the candidate uniquely equipped to bring necessary investments into the state and lift struggling residents out of poverty.

“He’s exactly the kind of partner that I want to walk this path with as we move forward in the state,” he said.

Both men said their views sync on a range of issues, from economic equality and education reform to climate change and transportation policy.

“These are all issues and policy positions that I’m excited to build out with the county executive,” Moore said.

Pittman, who ran a horse farm before becoming county executive in 2018, said he was looking forward to “introducing Wes to rural Maryland and people in agriculture.”

But the news about Pittman, the leader of the state’s fourth largest jurisdiction, is on a different level, and could open a logjam of elected official endorsements for a candidate with potentially broad appeal but who is also a novice in the political game.

It also underscores that Moore is one of the few candidates in the Democratic primary from the Baltimore area, which could be fertile territory for him. If Moore is able to run up big totals in Baltimore City and the surrounding suburban counties, that could prove to be an impenetrable voting bloc.

“It demonstrates that we plan on running a 24-county strategy,” Moore said. “Everywhere in this state is going to matter.”

Pittman expressed admiration for the other Democratic candidates for governor and acknowledged that he had voted for former Prince George’s County Executive Rushern L. Baker, who is running for a second time, in the 2018 primary. He called Baker “a little bit of a mentor” who had provided him with invaluable advice when he was getting ready to take over as county executive.

“I think he’d make a great governor,” Pittman said of Baker. “But I think Wes is the right candidate for the moment.”

Pittman also has ties to Franchot through the comptroller’s campaign manager, Ben Smith, who is also the top consultant to Future Matters, a political advocacy organization that Pittman launched last year.

Like Moore, who is making his first run for office, Pittman had never been a political candidate until he ran for Anne Arundel county executive in 2018, ousting Republican incumbent Steve Schuh in one of the big upsets of that political cycle in Maryland. But in a purple county, Pittman faces a tough reelection race next year, with a handful of potential candidates eyeing the Republican primary.

Pittman said backing Moore for governor could be helpful for his own political fortunes. “I think campaigning for Wes will bring out what we’re trying to do in the county,” he said.

Moore called Anne Arundel County “so representative of our beautiful state,” with urban, suburban and rural areas, with pockets of poverty, with businesses struggling in the wake of the pandemic, and with a host of environmental challenges.

Of Pittman, Moore said, “I’m humbled and grateful to have the support of an official I’ve really admired.”

Editor’s note: This story was updated to include other elected officials who have endorsed Moore’s candidacy. 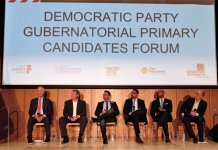 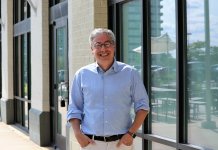 Rosenbaum on His Bid for Governor: ‘People Are Ready to Lean in and Engage’