The author suggests that you might need this to help with the Baltimore-centric African American Vernacular English (AAVE) laced throughout this commentary.

Ayo on the low, Groundhog Day has always been one of my favorite holidays. Something about entrusting a Marmota Monax named Punxsutawney Phil from Pennsylvania with our season’s forecast has always made complete sense to me.

My mother often revisits a story of me from my childhood when I was in a module of school learning how to read a calendar. Much like any child would, both she and I recall how much ado I’d often make with regard to holidays, which are always marked with small lines of text on most print calendars. She says I was in the kitchen of our high-rise apartment in New York City, couldn’t have been older than five, and asked after checking the calendar as I had been instructed in school if the family would be coming by for dinner or celebration on Groundhog Day. My mother of course chuckled and had to explain to me that despite the small text on the calendar denoting a holiday, Groundhog Day isn’t quite like Thanksgiving or Christmas.

Over 20 years later I still beg to differ with her on that. Even now nothing is more exciting to me than thinking about the Spring thaw. Flowers in bloom, love in the air? I live in Baltimore now and Baltimore be cuttin’ up when the weather breaks foreal. 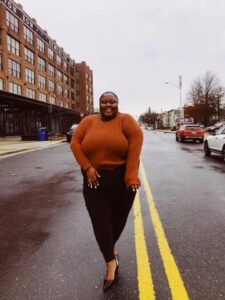 The last few days in Baltimore have felt like the underside of a cabana in Puerto Rico in August in comparison to the slushy, hail-filled days we were having just about two weeks ago. It felt like the snow wouldn’t stop, but now everyone is outside, you feel me? My good friend Juju and I joked about texting Mayor Brandon Scott anytime we reached thick patches of ice or dirty mounds of residual snow in our travels around Baltimore City.

I do think the city employees responsible for salt trucks responded well to those days of the wintry mix we experienced in February. Back on Feb. 2 Punxsutawney Phil (yes, I’m going to refer to the groundhog as a credible source)…Phil predicted six more weeks of winter after seeing his shadow just outside of his burrow system. I believe yo. So this means the unseasonably warm weather we’ve been experiencing must be Fools’ Spring?

Scrolling around on the internet this week as I’m sure we all do more often than is necessary, I stumbled upon an old meme titled, “The 12 Seasons of Maryland,” which ordered the seasons as follows:

Winter definitely ain’t done, dummy. Well, because Phil said it, and also we’ve all been here before. The glistening sun illuminates our cold gloomy lives for two days and all of a sudden gentrified areas have white men and women draggin’ and jogging with neon-colored shorts on, birds are chirping, and we’re leaving our goose down coats in the car thinking Spring is in attendance.

Don’t celebrate just yet, like 5-year-old me would have done on Groundhog Day in the 90s. It’s all a farce, Winter ain’t over so stop geekin’ and keep your coat on. Please don’t prematurely put your winter digs away, woe. According to that meme, the second winter is on our heels wholetime.

Saturday, March 20 is the official first day of Spring in the Northern Hemisphere, according to the Gregorian calendar, but we’ll see. Put your coat on before I yoke you up.