With the congressional debate over a second COVID-19 stimulus dragging on, and more people facing hunger and potential homelessness, Maryland Comptroller Peter V.R. Franchot (D) said Friday that the time has come for the state to fill the void.

The state’s chief tax collector, an announced candidate for governor in 2022, called on Gov. Lawrence J. Hogan Jr. (R) and Democratic leaders of the General Assembly to approve a one-time stimulus payment to lower-wage workers.

“I have identified $1.5 billion in state reserves that could be spent immediately to prevent evictions, feed the hungry, provide medical care, and also support small businesses,” Franchot said.

He offered his proposal at the quarterly meeting of the state’s Board of Revenue Estimates.

“I join Governor Hogan, our congressional delegation, and leaders across our state in calling on Congress to pass a second stimulus before they adjourn for the year,” Franchot said. “But I also want the State of Maryland to step up and do the right thing in the form of a Maryland stimulus.”

This week, several jurisdictions — including the state’s largest city and its largest county — announced an end to indoor dining and reductions in retail capacity. Others are expected to follow suit as COVID-19 infections and hospitalizations continue to rise.

In an interview, Franchot said it’s important that the state assist hospitality-industry workers and others who are struggling with unemployment or reduced hours. Under his proposal, anyone who earns less than $30,000 a year would receive a one-time state payment.

“There’s a lot of suffering going on,” he said. “I keep telling the governor, just give me the names of people and businesses, and I will take care of it. We will get checks out to them, because they’re all in our database.”

Franchot said he was stunned to see long lines at food banks in his home county, Montgomery, long considered the state’s wealthiest. The Maryland Food Bank said last month it has already spent $16 million on food this year, a 400% increase over last year.

Kopp, a member of revenue panel who also lives in Montgomery, agreed that the state must “step in” and fill the void left by the federal government’s failure to approve a second stimulus.

“I do agree it’s our responsibility,” she said. “I do know that the legislature — and I assume the governor — are looking at [aid] packages. … The question is what’s going to happen between now and the beginning of February. It’s going to be the two toughest months.”

The Board of Revenue Estimates voted on Friday to increase its revenue projections for the current fiscal year, FY 2021, and next year.

The increases in revenue estimates were driven by higher-than-expected sales tax and capital gains revenues, the panel was told.

“The [stock] market has been strong throughout tax year ’20, and we also have no reason to doubt that that strength will carry through tax year ’21,” said economist Andrew Schaufele, the panel’s executive secretary. 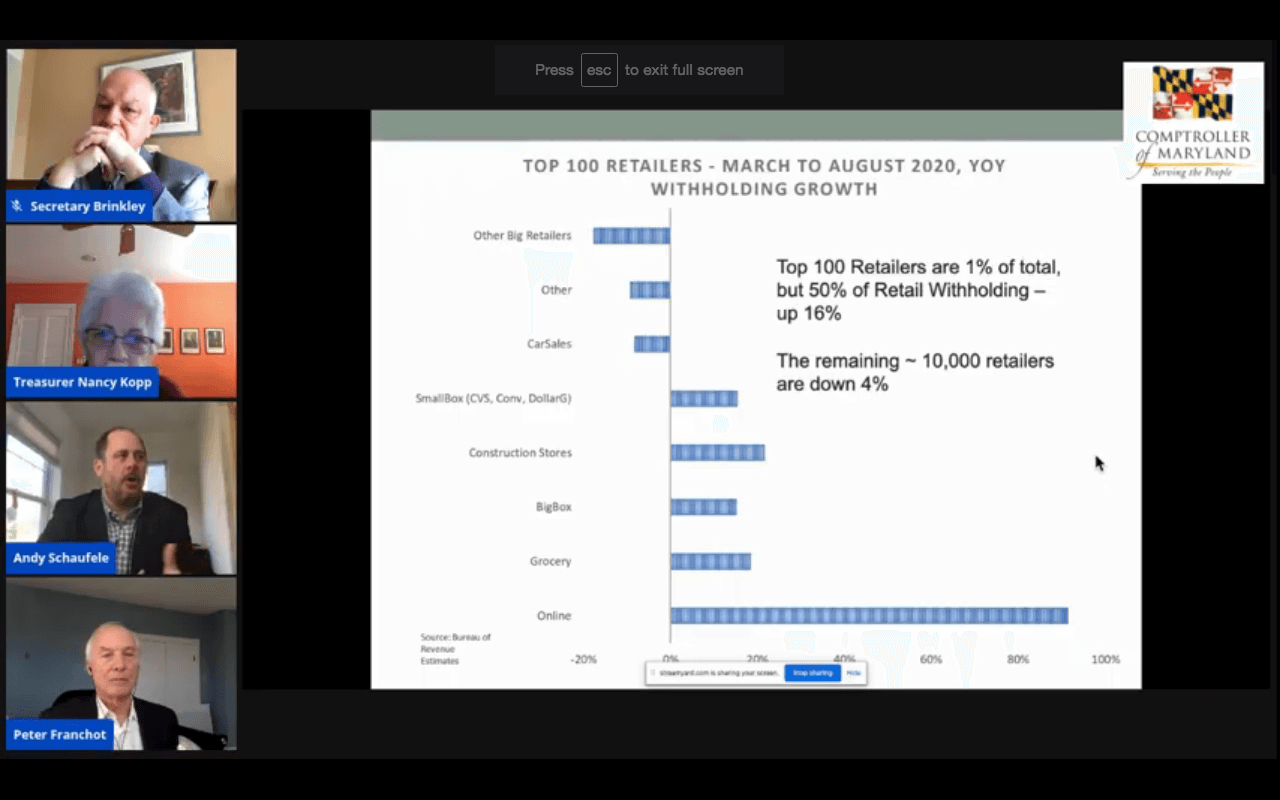 Members of the Board of Revenue Estimates look at a chart showing huge increases in online shopping since the pandemic hit and smaller gains for “big box” stores and appliances. Other retailers have suffered. Screenshot.

He said the increase in the sales tax has been driven by a shift in consumer behavior from services, which generally aren’t taxed, to goods, which are taxable. He called that “a temporary boom for the general fund.”

Lottery sales have also outperformed expectations, Schaufele said. “Throughout the pandemic, it has proven to be a form of entertainment that’s been consistently available, whereas much of the entertainment elsewhere has been removed.”

The news isn’t all good for the state’s budget. Corporate income taxes will be much lower than projected before the pandemic. And courts-related revenue — much of which comes from speeding tickets — is off as well, as fewer people drive and officers shy away from non-essential contact with the public, Schaufele said.

The economist acknowledged a “social disconnect” between higher-wage residents, many of whom can work from home and have continued to draw a paycheck, and those who have suffered economically.

“Lower-income jobs are bearing the brunt of this recession,” he said.

Brinkley, Hogan’s budget secretary, warned that the economy remains fragile. He said a slower recovery could force the state to spend more on safety-net programs.

“There are a number of unknowns that could still alter our destiny,” he said. “This recovery could turn into a sugar-rush that crashes as federal assistance dries up. … We are all still in uncharted territory.”