Even before in-person voting began at 7 a.m. on Monday morning, Maryland voters queued up outside of early voting centers across the state.

And by 4:30 p.m., more than 117,000 voters had cast their ballots during the state’s first day of early voting, Maryland Deputy Election Administrator Nikki Charlson confirmed. With hours left until the polls closed and a post-work rush expected, turnout was set to eclipse the first day of early voting in 2016, when 123,623 voters cast their ballots.

Early voting will continue for the next week, wrapping up the day before Election Day. The state’s 81 early voting centers will be open from 7 a.m. to 8 p.m. daily, and will double as regular voting centers on Nov. 3.

Although voters turned out in droves for the first day of early voting, they weren’t the first to submit their ballots in the presidential election. As of Monday, more than 947,000 voters had voted by mail, according to data from the State Board of Elections.

Maryland Matters reporters spoke to voters in some of the state’s largest jurisdictions as early voting began on Monday. Here’s what voters faced as in-person voting kicked off:

Baltimore City’s polling place at Camden Yards had about 75 people waiting in line to cast their ballots at 10 a.m.

Nearly two-thirds of the way through the line stood Kristine Way, who told Maryland Matters that she had only waited 30 minutes. This was her first time voting early: Way said she was willing to spend “as much time as it took” to cast her ballot in person.

“I usually do it on the day of because I like the environment ― the atmosphere,” she explained, but said that she showed at Camden Yards on the first day of early voting in part to see what the turnout was.

Morgan State University, which had approximately 200 people waiting in line outside of its polling place, was a completely different story.

Chrystal Green arrived on campus at 8:50 a.m., and was still yards away from the electioneering line by 10:45. She said she had cleared her schedule to make sure she could cast her vote.

“I took the day off, and it’s my intention to do whatever needs to be done,” said Green. “I don’t have a cutoff point.”

Some people with predetermined cutoff points nixed them because of the time they had already spent in line.

“Even had to do a Zoom meeting on my iPad,” said Morgan State voter Susan Dorsey. “Yeah, we just got done Zooming,” said Cindy Renn, who stood in line next to her.

The pair arrived at the polls around 9 a.m. and planned to spend just an hour there because of that Zoom meeting. By the time Maryland Matters spoke with Renn and Dorsey, they had waited an hour and forty-five minutes. 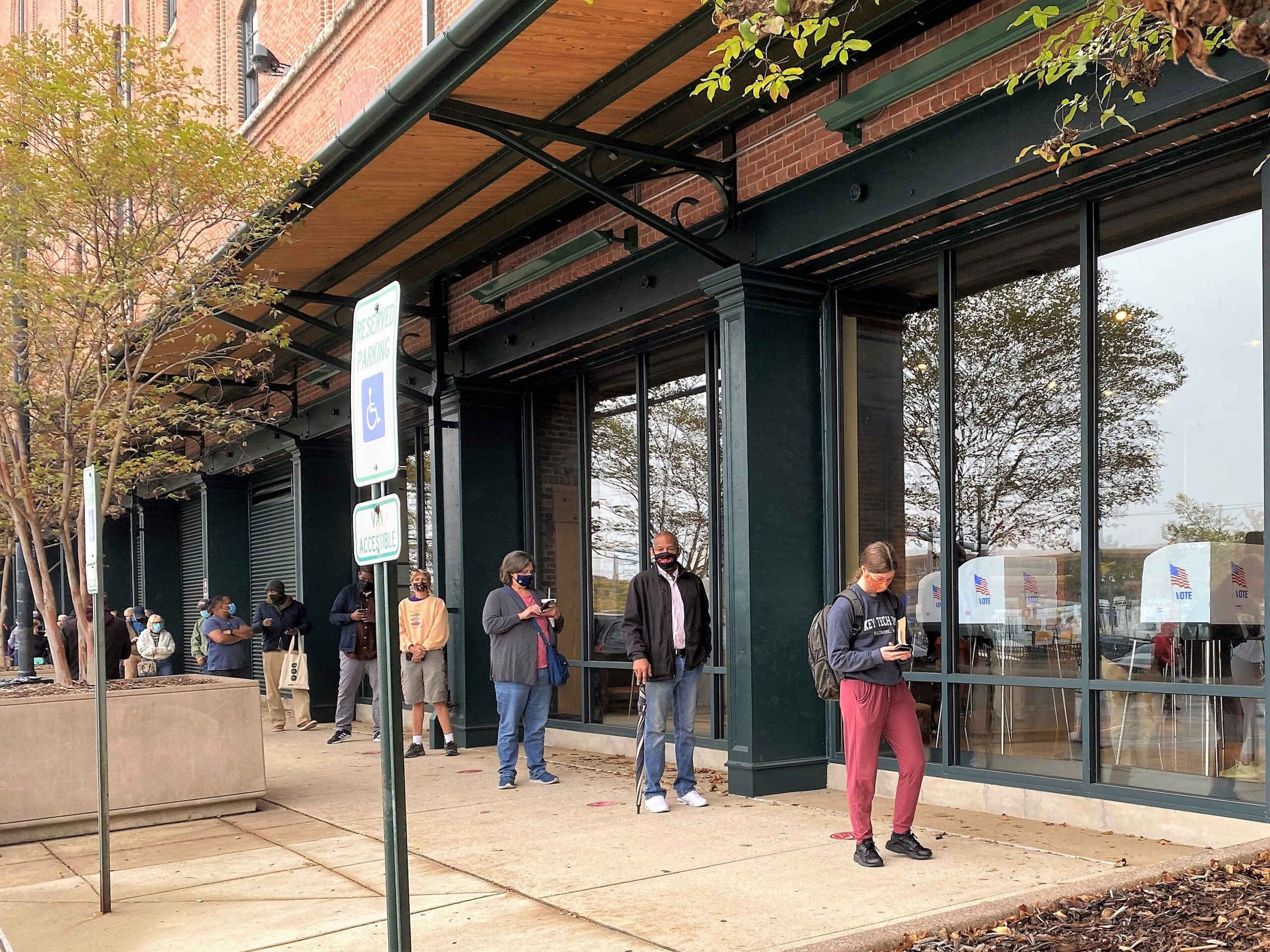 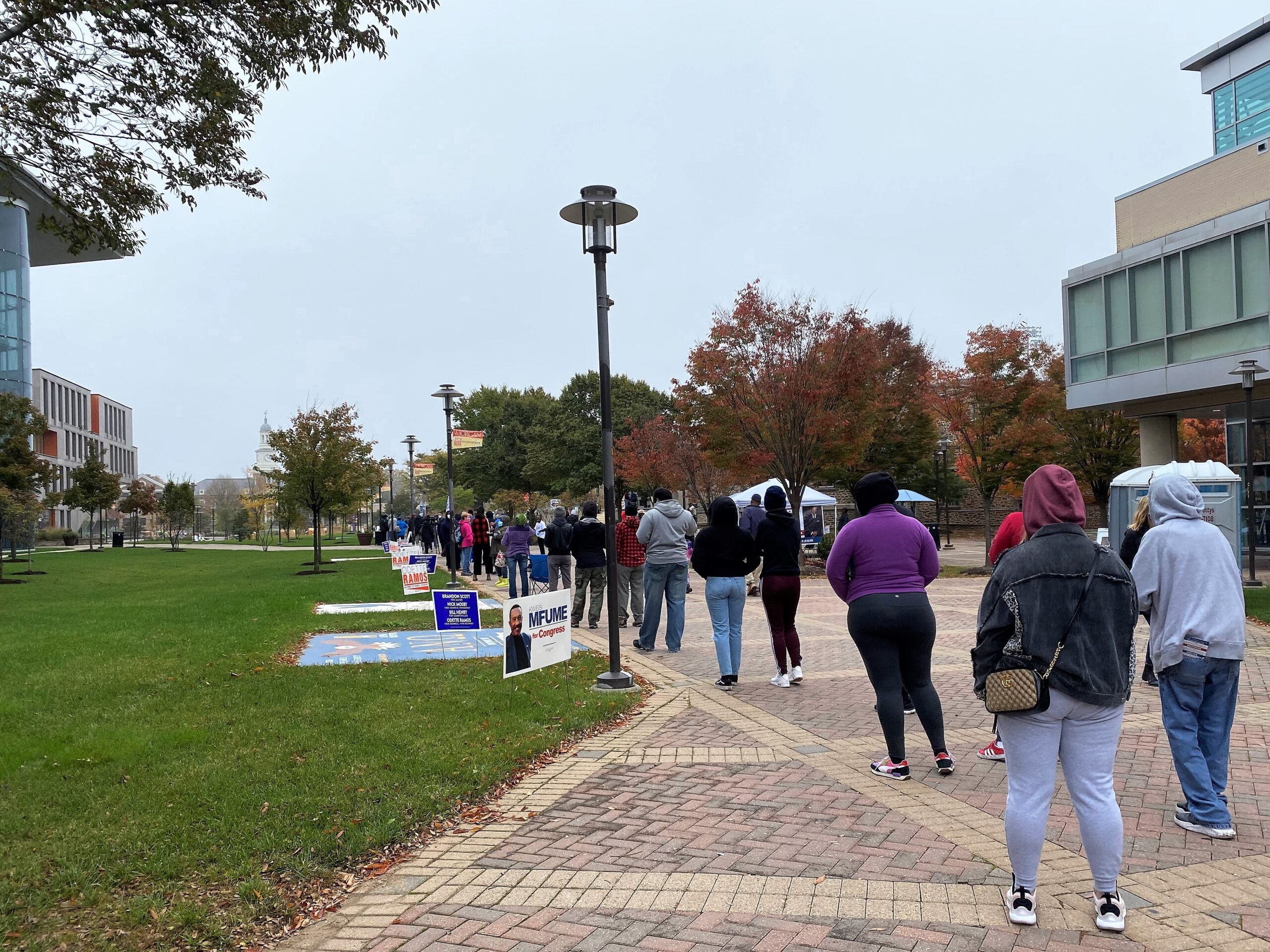 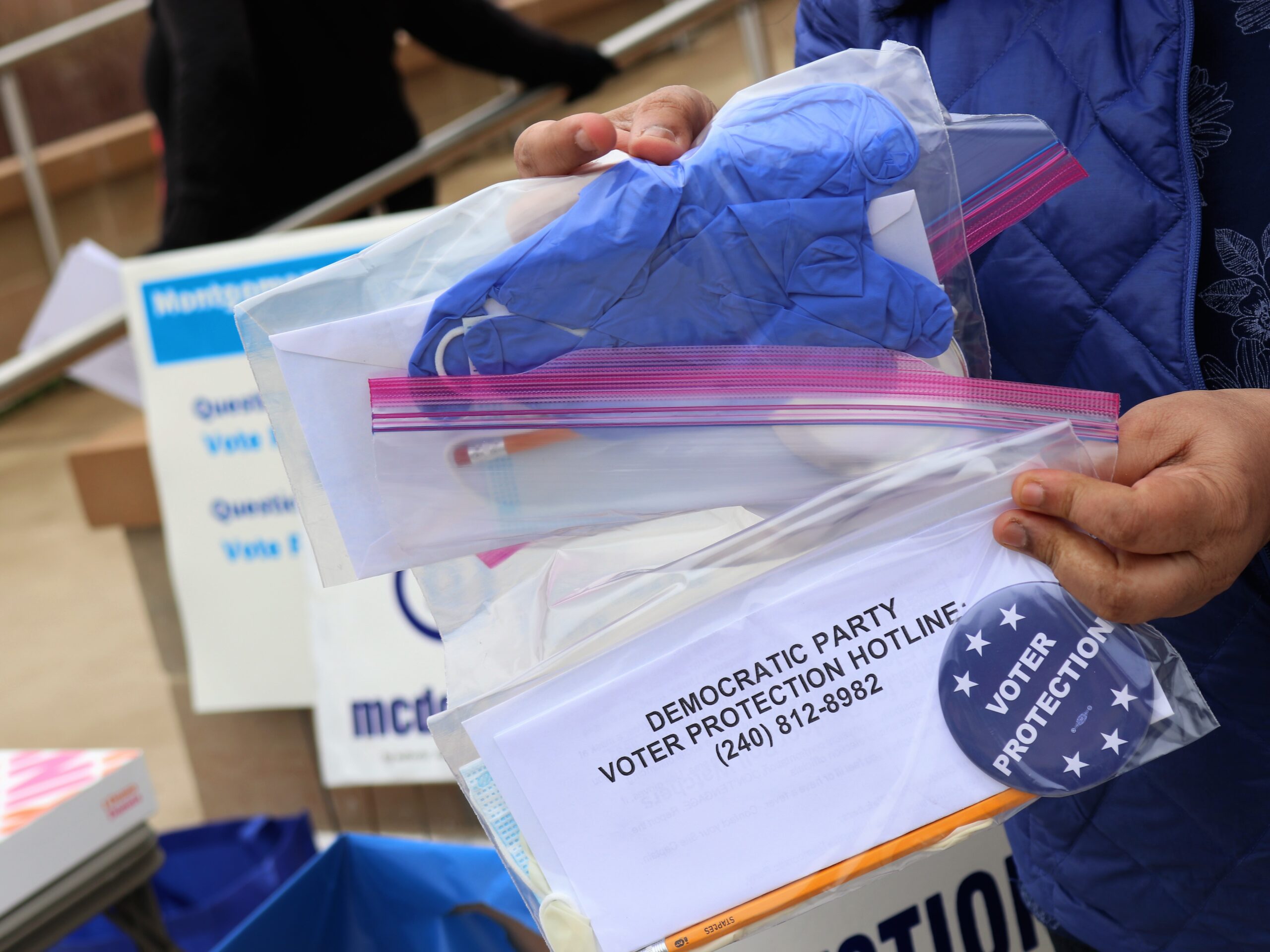 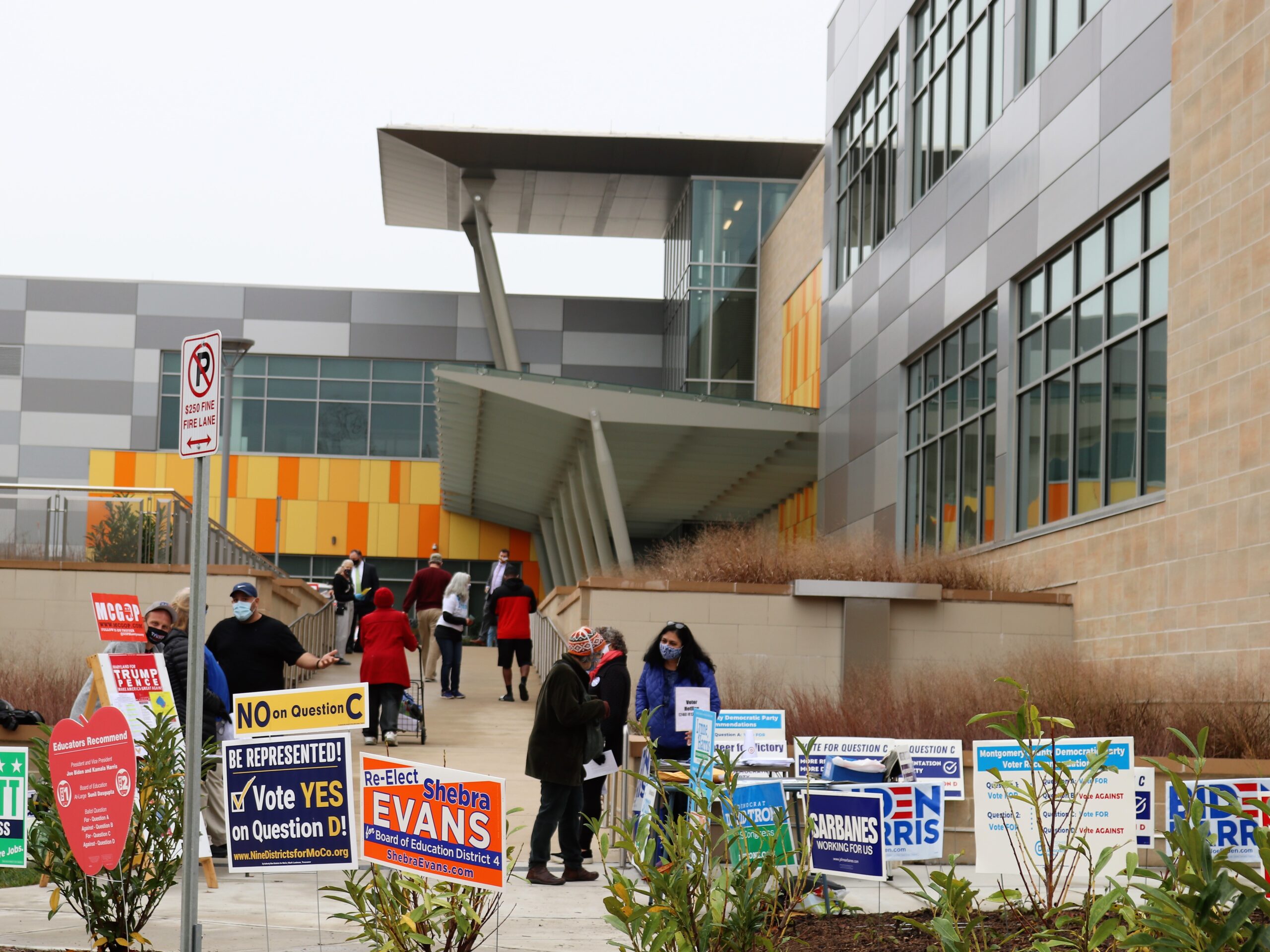 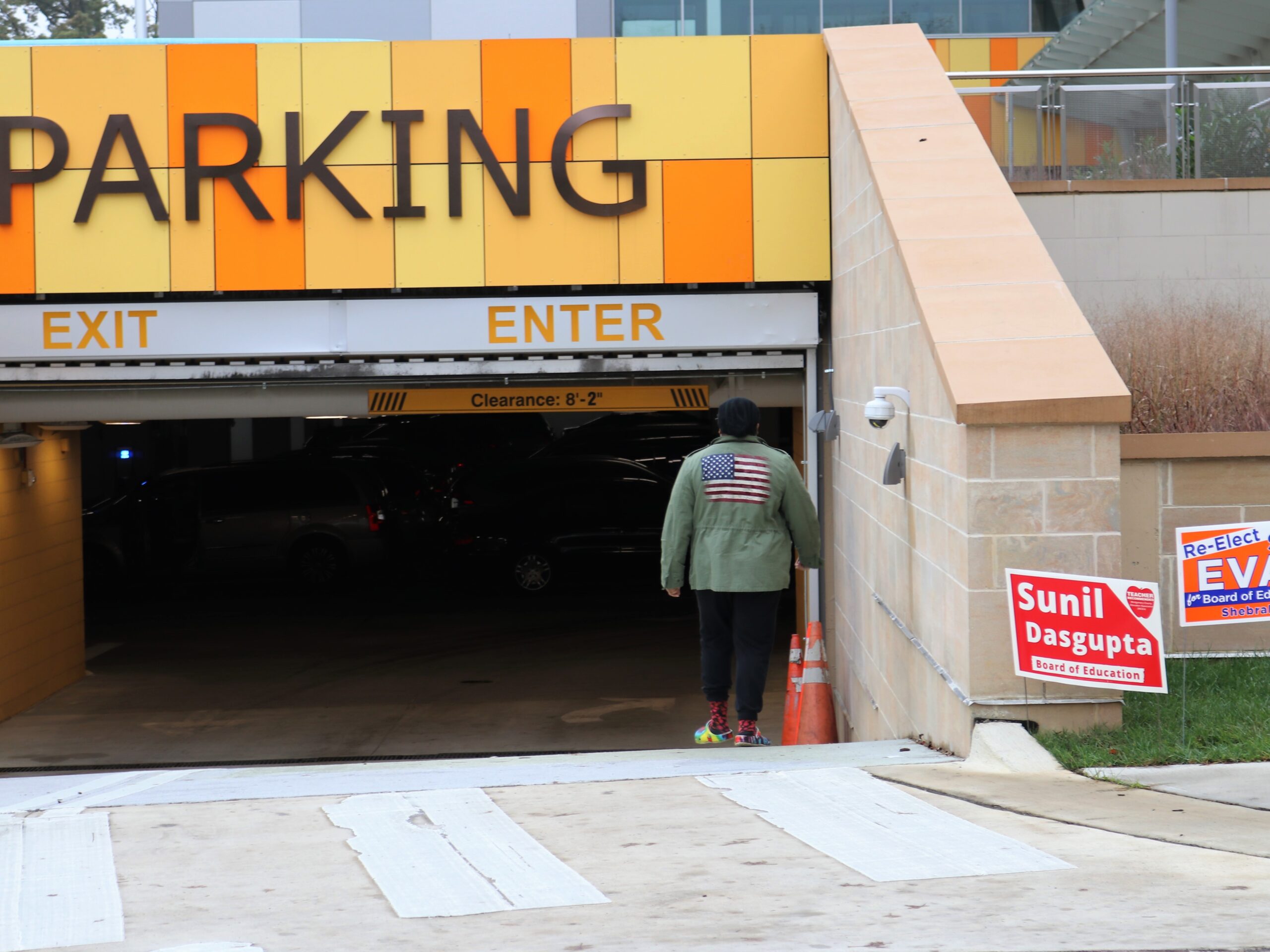 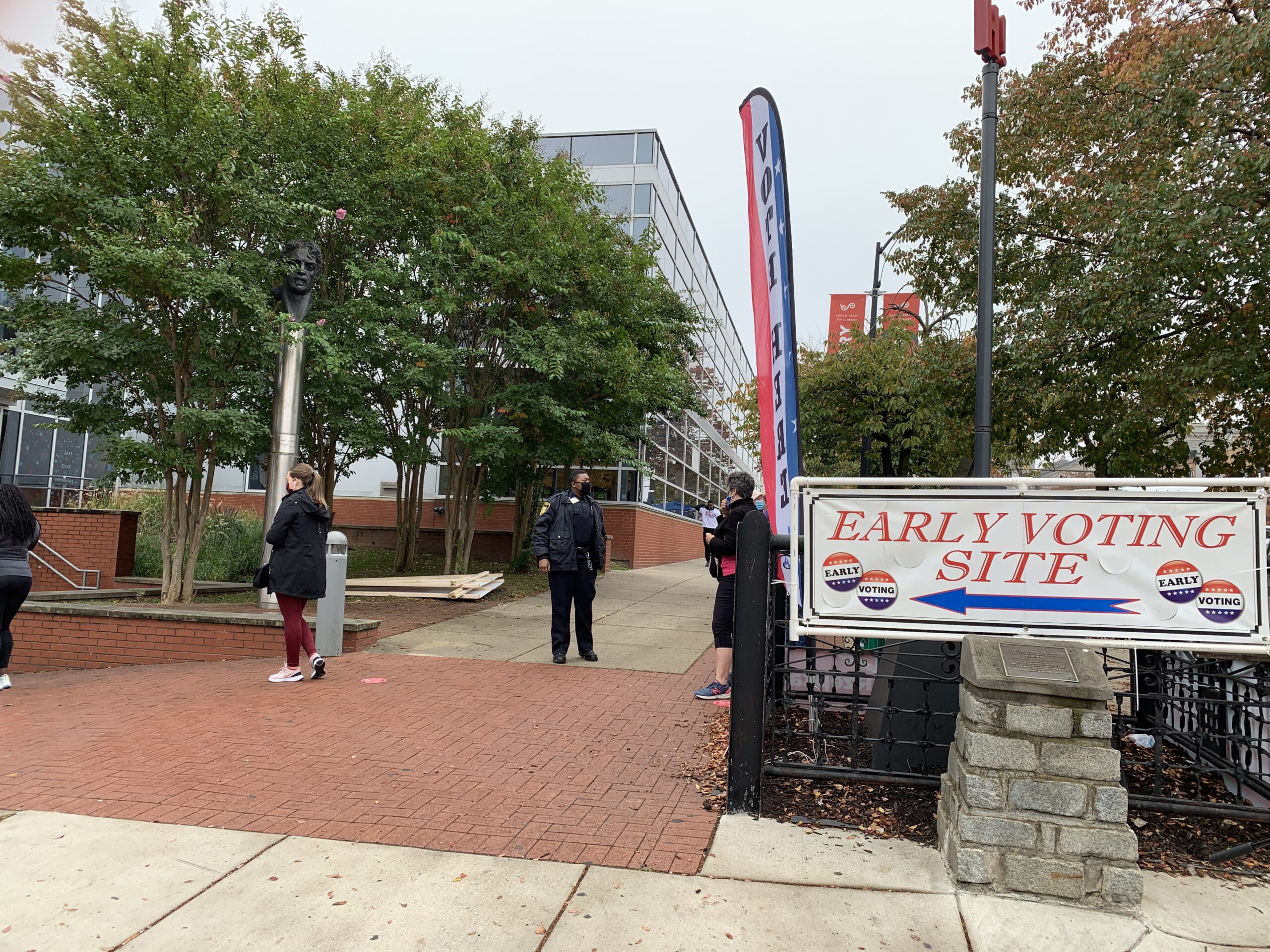 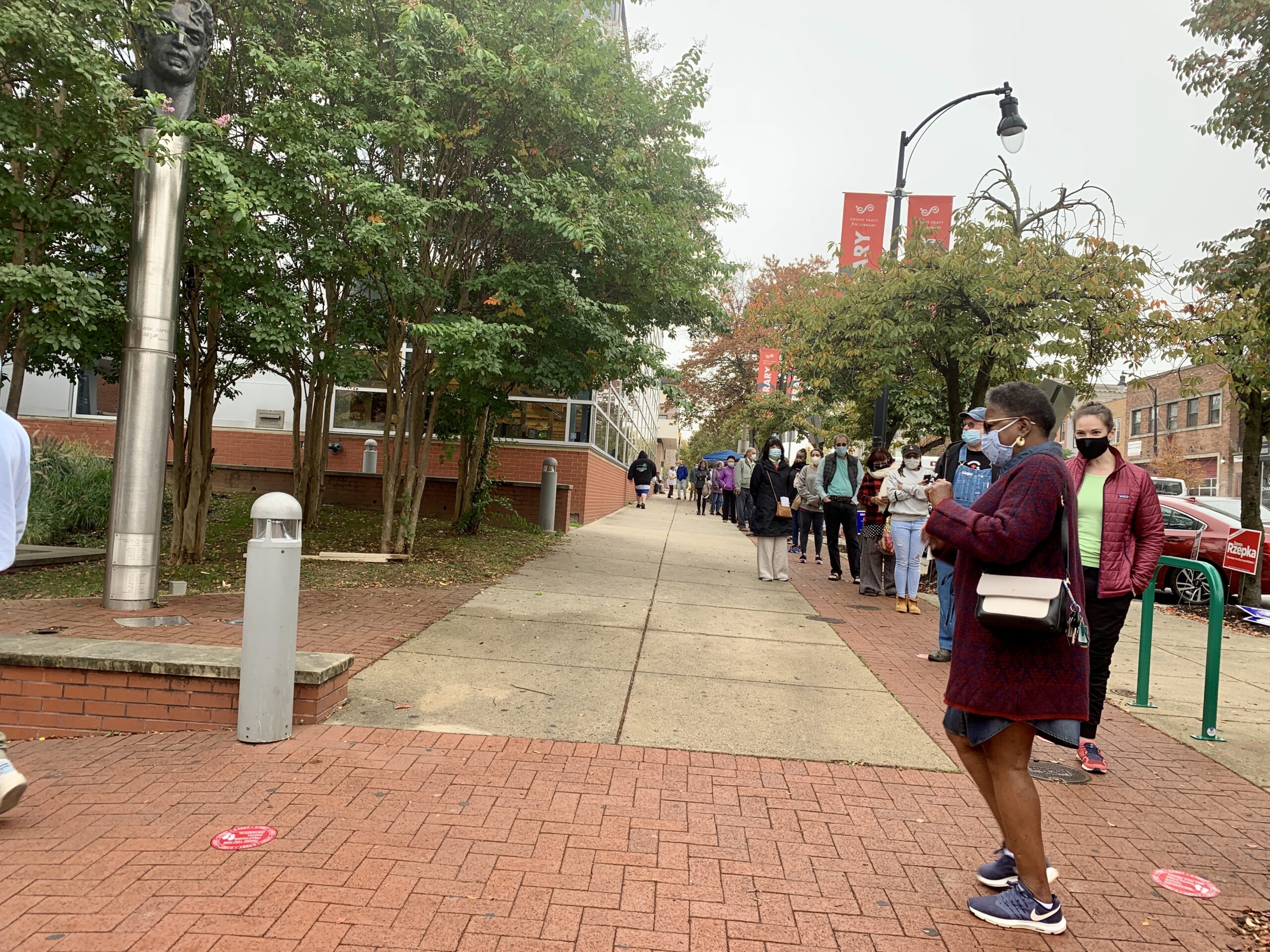 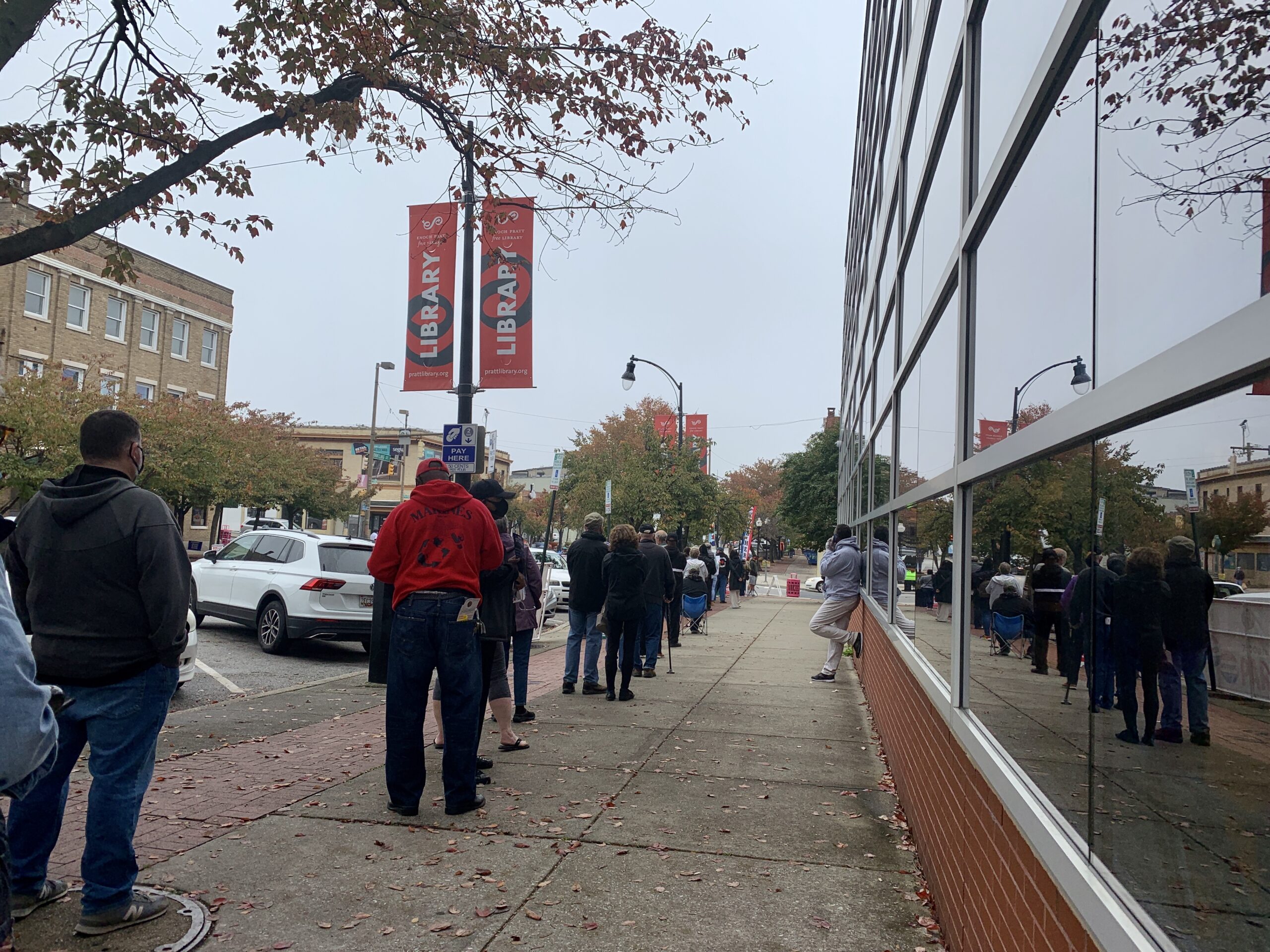 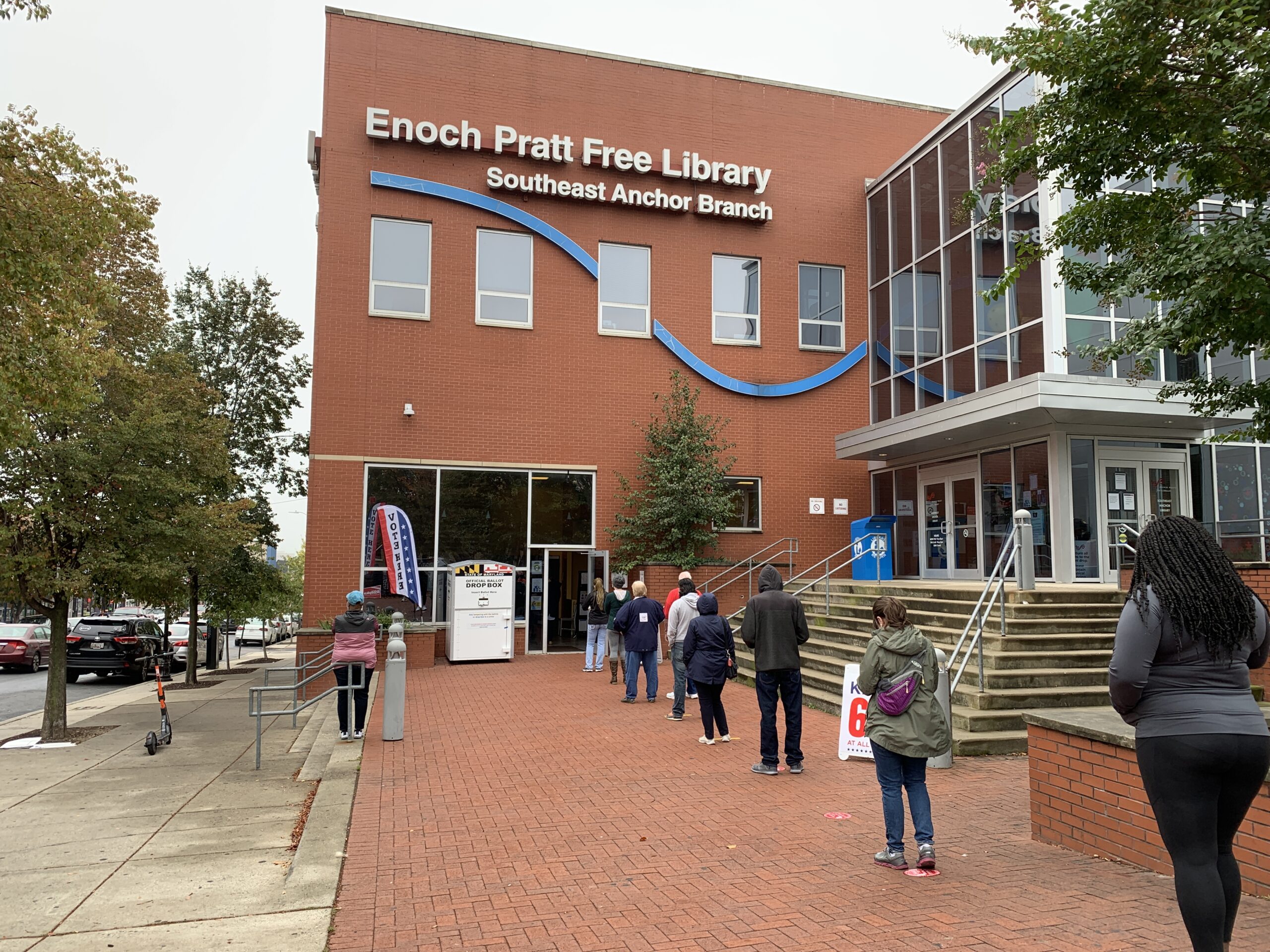 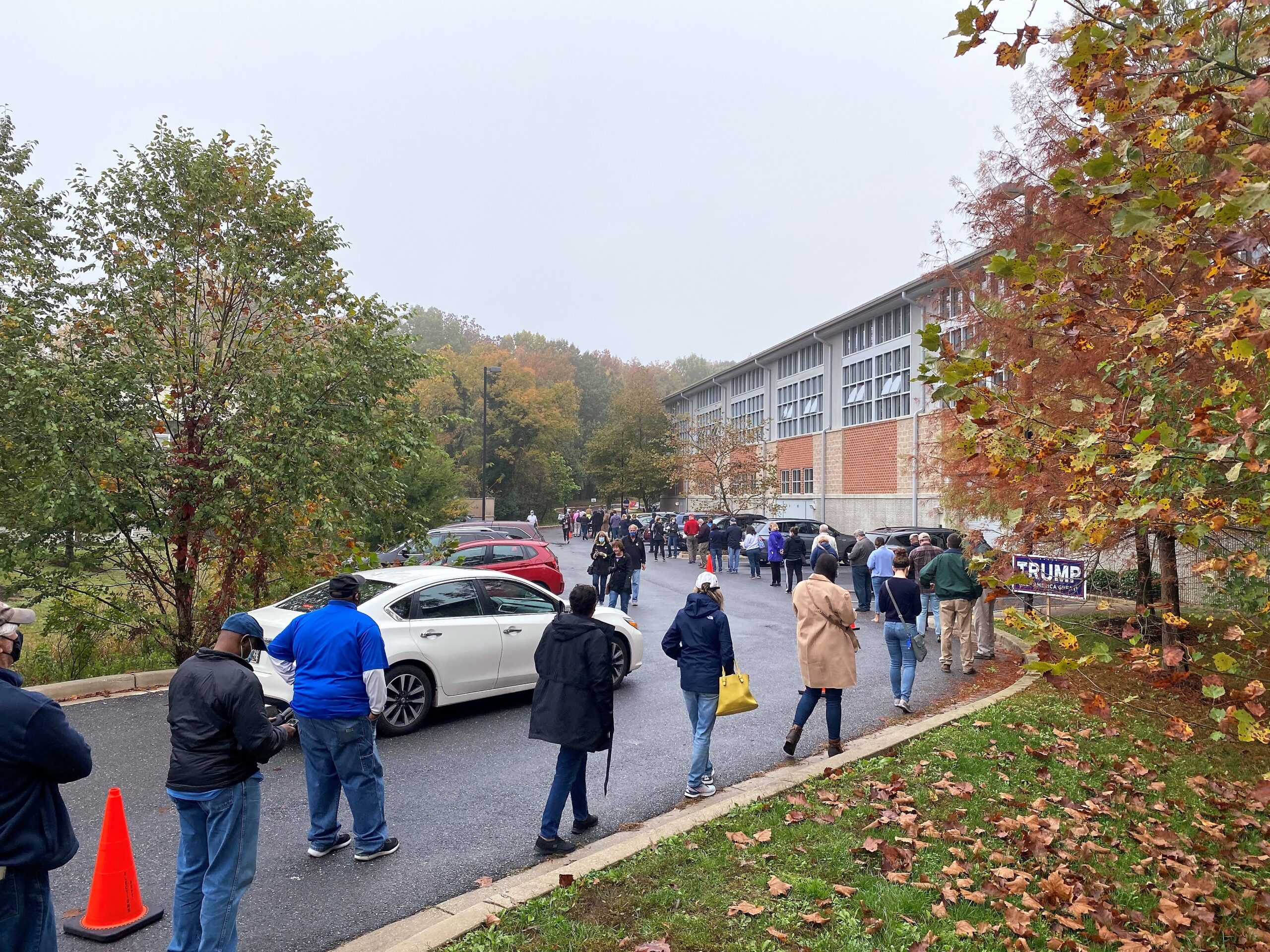 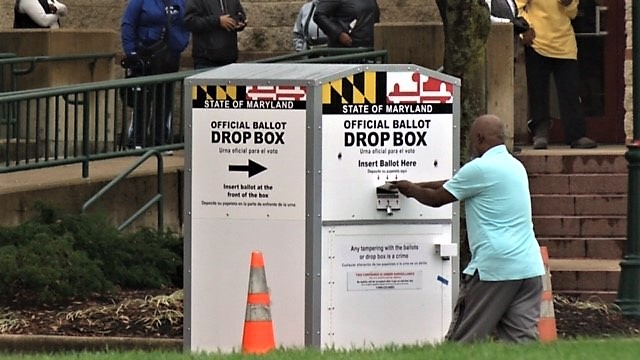 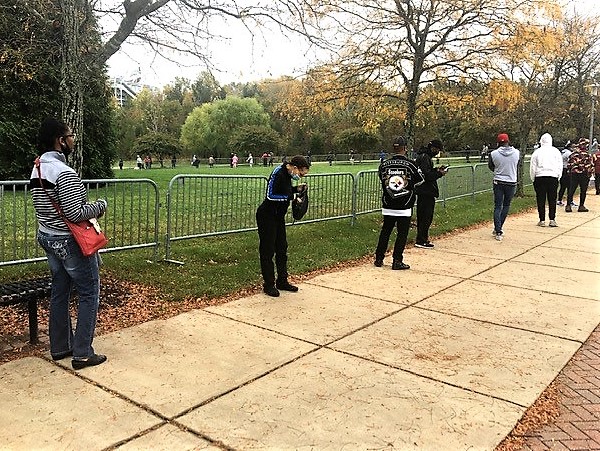 Postmaster General Louis DeJoy, a wealthy donor to President Trump with no prior Postal Service experience, came under fire after he took office this summer due to controversial changes which critics said slowed down mail delivery.

Those changes included slashing overtime and removing hundreds of mail sorting machines from facilities across the country.

In August, DeJoy said he’d postpone any “longstanding operational initiatives” until after the election. Despite his reversal, fears about delayed mail stuck with voters as they waited in line to vote on Monday.

“The distrust of the mail-in voting process makes you just want to vote yourself,” said Karen Wilcher, who voted at the Wayne K. Curry Sports and Learning Center in Landover. “Early voting is clutch. It’s nice.”

Sheri Smith, a Baltimore resident, said she wanted to vote in person because she was concerned that there may be “problems” if she mailed in her ballot. She took the day off work and went to East Baltimore’s voting center at Southeast Anchor Library on Monday to “get it out of the way.”

Mike Weikert decided to vote in-person at the Southeast Anchor Library because of the Trump administration’s confusing rhetoric about mail-in ballots. He said he was motivated by the “sense of urgency” of this election to come out on the first day of early voting.

“This election has importance and consequences at almost every level,” he said.

Donleer Walker, who voted at the Pip Moyer Recreation Center in Annapolis on Monday, also cited fears over Postal Service delays as her reason for turning up to vote in-person.

“I felt as though my vote would be accurate if I voted in person,” Walker said.

Other voters had intended to vote by mail, but unexpectedly found themselves at the polls: Helen Stewart, an Anne Arundel County resident, made a mistake when filling out the mail-in ballot she received, and opted to use a provisional ballot during in-person voting instead.

“I used a Sharpie pen and it bled through to the back,” Stewart said. “I didn’t want to risk having it be invalidated because of that. I had to get provisional.”

Stewart budgeted about 20 minutes to vote, but estimated she stood in line for nearly 40 minutes since the lines for provisional ballots had longer wait times. She elected to vote on the first day of early voting to “make sure that the message is sent that Americans care about this election.”

David Garreis, the deputy election director for Anne Arundel County and the Maryland Association of Election Officials president, wasn’t surprised by the long lines. In fact, he thinks the election could bring a record turnout to his county.

“That was to be expected,” Garreis said of long lines. “We’re well on our way to setting a day one turnout record.”

Shariq Naqvi, who voted at the Southeast Anchor Library in Baltimore, said he is not an active voter, but “made a point” to come out today to vote early for the 2020 elections.

“I think we’re moving backwards when it comes to things like science, technology, climate change, education,” he said. “It feels like we are at a war with science right now and we need leaders who say science is right, science is good, let’s listen to it and I just kind of feel like [the current administration] is neglecting that.”

Baltimore voter Sharone Penha said she came out to vote early so that there’s “no procrastination and no room for error.”

“I definitely prioritized this particular election,” Penha said. “This is paramount [and is] detrimental for my children, so I needed to get in and vote.”

Thousands of Prince George’s County residents awoke before daybreak to take advantage of the first day of early voting.

An election judge at the sprawling Wayne K. Curry Sports and Learning Center, said there were 100 people in line when she arrived at 5:45 a.m. — and 150 people waiting when the doors opened.

Joanne Antoine, the executive director of Common Cause Maryland, said she’s heard of long lines in less-populated jurisdictions like Calvert, Charles and Queen Anne’s counties. Antoine said she wasn’t surprised to see long lines as early voting began, but warned that wait times will only grow throughout the week.

“We should expect even longer lines as we get closer to Election Day,” Antoine said.

At the Wheaton Library and Recreation Center in Montgomery County, a socially distant line stretched around the back of the building and down a long sidewalk to Georgia Avenue before the polls opened. But voters were able to shuffle through quickly, and crossing guards shepherded traffic in and out of the packed parking lot.

Monday’s turnout was a testament to national efforts to increase voter turnout, even during an international pandemic.

Madison Ruppenthal, 26, met a friend at the Wheaton Library in Montgomery County to cast their ballots together. She’s been sending out emails and messages, even PDFs of voting center maps, to friends and family, encouraging them to make a plan to vote.

“I think this year’s election is arguably the most important in the last few decades,” Ruppenthal said.

As the pandemic began, the rolls of Marylanders seeking food stamps swelled by 35%.

COVID-19 booster shots are on track to become as frequent as the annual flu shot, though high-risk people may need more than one dose…