If there was one durable political relationship in Annapolis, it appeared to be between state Comptroller Peter V.R. Franchot (D) and his longtime chief of staff, Len Foxwell.

Foxwell has been advising Franchot since the early 2000’s, well before Franchot was elected comptroller in 2006. He plotted Franchot’s improbable political rise, helped mold his political persona as a maverick, and made him the adroit and popular politician that he is today ― the early frontrunner in the 2022 gubernatorial election. 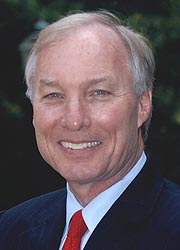 But the mutually beneficial partnership came to a swift and stunning end Monday when Franchot’s office released a terse statement announcing that Foxwell was relinquishing the top job in the comptroller’s office immediately and would “separate from the agency at the end of the month.”

The statement also said that Emmanuel Welsh, who has been Foxwell’s deputy chief of staff for the past four years, would become interim chief of staff.

“Comptroller Franchot thanks Mr. Foxwell for his 12 years of dedicated service and contributions to the Comptroller’s Office and the State of Maryland, and wishes him the best in his future endeavors,” the statement said.

The news jolted the clubby world of Maryland politics and set off a rash of speculation about what had happened ― and the political implications.

The comptroller’s office was tight-lipped and Foxwell declined to comment.

One person familiar with the circumstances of Foxwell’s departure suggested it “was not a Roy McGrath situation” ― a reference to Gov. Lawrence J. Hogan Jr.’s erstwhile chief of staff who is under fire for accepting a legal $250,000 payout when he left his job heading the Maryland Environmental Service. In other words, there does not appear to have been any suggestion of official malfeasance.

In recent years, Foxwell has become a warrior on Facebook against Franchot’s enemies, real and perceived, picking fights with Democratic leaders ― including high-ranking elected officials ― with whom Franchot has regularly feuded. In April, Foxwell was blasted by Republicans for provocative Facebook posts about far-right supporters of President Trump. Maryland Republican Chairman Dirk Haire was among the GOP leaders calling for Foxwell’s ouster.

But Franchot defended his top aide at the time, saying on Facebook that he was “100% supportive” of Foxwell. “He is an exceptional public servant, a dear family friend, and I look forward to his continued service as my chief of staff for years to come,” Franchot said.

When Arthur “Mac” Love IV, a Hogan administration official, was fired in late August for social media posts supportive of the teenager who opened fire on racial justice protesters in Kenosha, Wis., Foxwell’s earlier Facebook comments resurfaced, with Republicans crying foul that Love lost his job while Foxwell did not.

While there was some immediate speculation in Maryland political circles that Foxwell was leaving the comptroller’s office to concentrate full-time on the 2022 campaign, that does not appear to be the case.

Foxwell has mentored many staffers in the comptroller’s office, including Welsh, and has brought in several politically savvy young aides who have helped build Franchot’s political network across the state. Whether the change in management impacts the day-to-day operations of the comptroller’s office ― or Franchot’s ambitions for higher office, which were amplified almost daily by Foxwell’s strategizing ― remains to be seen.