Demonstrators carried handmade signs calling for the state of emergency to end as they chanted, “Recall Hogan,” “No more fear” and “Kids over politics.” One woman was hitting a pot with a wooden utensil in support, and a car and motorcycle drove around the circle a couple of times, honking.

One walked with a sign that said “faces not phases!” with a red slash drawn over a blue mask.

Another sign read “I will not wear your ‘fear’” with 5 blue disposable masks attached to the sign with clothes pins. “End the fake state emergency,” another one read.

A boy carried a sign that said, “let us play.” 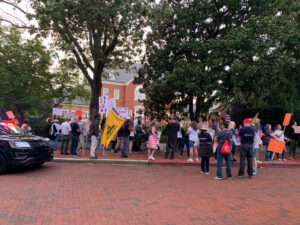 Protesters outside the governor’s mansion on Friday evening, calling for the lifting or more restrictions during the COVID-19 pandemic. Photo by Elizabeth Shwe.

The protest was organized by Reopen Maryland, a 26,000-member online group that describes itself as “a group of individuals concerned about the impact of Maryland’s mass shutdowns and school closures in response to COVID-19,” and Return2Learn Maryland Schools, a 3,000-member online group that advocates for Maryland students to return to in-person learning and recreational sports. Both say they are nonpartisan groups.

The demonstration came a couple of hours after Hogan announced an order allowing restaurants to increase capacity limits from 50 to 75%. As of Friday, the state was reporting 119,062 confirmed cases of COVID-19 and 3,724 deaths related to the virus since March. The statewide positivity rate is 3.21%.

Hogan announced earlier this month that rates were low enough for the state to begin the third and final phase of reopening, with some modified restrictions. But the governor allowed counties to lift pandemic restrictions at a slower pace, including the reopening of schools.

“If our governor can close down schools, he has the ability to help open our school,” said Christina Olson, the founder of Return2Learn Maryland Schools. “Putting it down to the Board of Education and leaving them in that situation by themselves is ridiculous.”

She said she believes that the “mental health crisis” from shuttering schools is “more real” than the COVID pandemic itself.

It had been hard to retain the group’s interest, which first formed on Facebook in mid-April, after the state began to reopen, Jim Wass of Reopen Maryland said. But as schools began the year with virtual learning, another wave of anger and dissatisfaction developed, prompting the protest, he said. “It’s time to enter phase 4,” he said.

Tim Walters, a co-founder of Reopen Maryland, called Hogan’s emergency order “unconstitutional.” “Fear is not a policy,” he said.

He said he hopes this protest “wakes up” Marylanders to understand that Americans should be able to make their own choices.

Although Walter said he and his family have contracted COVID-19 and that he suffered from pneumonia because of it, he still does not believe that the state needs to be shut down.

“It does kill, but we know who it targets and who’s vulnerable to it,” he said. “We don’t shut the entire society down for that. We don’t do that for any other disease, so why are we doing it now?”

Some demonstrators came primarily to advocate for schools to reopen, such as Monica Sizemore, a single mother with a 7-year old son and high school daughter in Baltimore City public schools. Sizemore and her daughter were one of the few demonstrators who were wearing masks.

“I don’t mind wearing a mask when I’m in a group because I’m here to talk about something else that’s more pressing [reopening schools],” Sizemore said. She said she is mostly concerned about the large amounts of screen time and lack of academic rigor in distance learning, not about the “politics” of mask-wearing.

American Heart Association and American Academy of Pediatrics recommend no more than 2 hours per day for children 2 years and older, she noted. In early September, state superintendent Karen B. Salmon approved a measure to require all school systems to have an average of 3.5 hours a day of live virtual learning by the end of 2020.

“It’s stressful, its stressful for everyone in the family.”

Prince George’s resident Jasmine Anderson said she came to Annapolis because she wants schools to open for her high school-aged child.

“Our kids are used as pawns in politics, in this fear, she said. “We can open up schools safely, we can use proper precautions. If they want kids to wear the mask, fine. Just open up schools.”

In late August, Hogan pressured all local school systems to reopen for at least some in-person instruction in the fall. To Anderson, Hogan had waited until the last minute to do so, and that was not fair nor good leadership.

Olson, the founder of Return2Learn Maryland Schools, said she thinks school unions should be held accountable for the negative impacts of distance learning on students.

“The union wants to hold our Board of Education responsible for any illnesses that teachers face if schools are opened,” she said. “We want to hold the school unions responsible for any crime against children and every mental health crisis that is caused as a result of school closures.”