On the 57th anniversary of the original March on Washington and in the throes of a pandemic, thousands of demonstrators on Friday joined Democratic lawmakers on the steps of the Lincoln Memorial in Washington, D.C., to demand Congress act on police brutality and voter suppression.

The event, organized by the Rev. Al Sharpton’s National Action Network, featured dozens of speakers who also called for the defeat of President Trump in November, a counterpoint to Trump’s acceptance speech as the Republican nominee just 12 hours earlier on the grounds of the White House.

The “Commitment March on Washington” was subtitled “Get Your Knee Off Our Necks,” a reference to George Floyd’s killing by a Minneapolis police officer — and police brutality against Black Americans was the major theme.

The police shootings this year of Floyd, Breonna Taylor in Louisville, Ky., and most recently Jacob Blake in Kenosha, Wis., and more have spurred protests across the country and formed the framework for an urgent call for change.

“Our coming together is in vain if we just talk about the problems but don’t chart a course toward the solution,” said Jamal Harrison Bryant, a pastor in Lithonia, Ga.

Krysta Funk, a library worker from Columbus, Ohio, rented a car and drove to the capital with her brother to participate. “You just have to act,” she said. “You can’t just stand still.” The health risks are “worth it,” she said.

Friday’s march was, in some senses, like the first one 57 years ago where a quarter-million people gathered for the March on Washington for Jobs and Freedom and heard the Rev. Martin Luther King Jr. deliver his iconic “I Have a Dream” speech. “It would be fatal for the nation to overlook the urgency of the moment,” King told the crowd in 1963.

Friday was a clear summer day, though a hotter one than the original march, and throngs of participants gathered along the Lincoln Memorial Reflecting Pool as they listened to members of Congress, advocates and leaders demand an end to racism and inequality.

But participation initially projected by organizers at 100,000 was cut due to quarantine restrictions the District of Columbia has levied on some states due to their levels of COVID-19 infections, leading many activists to stay home and take part in virtual rallies.

Nearly everyone who did attend wore masks, many with movement slogans like “I can’t breathe” and “Black lives matter.” Marchers lined up for blocks down Constitution Avenue to get their temperatures taken before entering the official rally area. Those with healthy temperatures received a green wristband and were allowed to enter.

Participants of all ages, races and backgrounds came from across the country. Some were pushed in strollers, while others were elderly. Voices blared over the loudspeakers and protesters called for reforms to criminal justice, voting rights and other social issues, as drums, music, chants and chatter filled the air.

Many carried signs assailing police killings of unarmed Black men and hailing civil rights heroes like the late Rep. John Lewis of Georgia and the Rev. C.T. Vivian. Some signs encouraged activism, to get in what Lewis called “good trouble, necessary trouble.”

Others mourned ongoing police violence against Black men, with slogans like “I still can’t breathe” and “Too many names, not enough justice.” 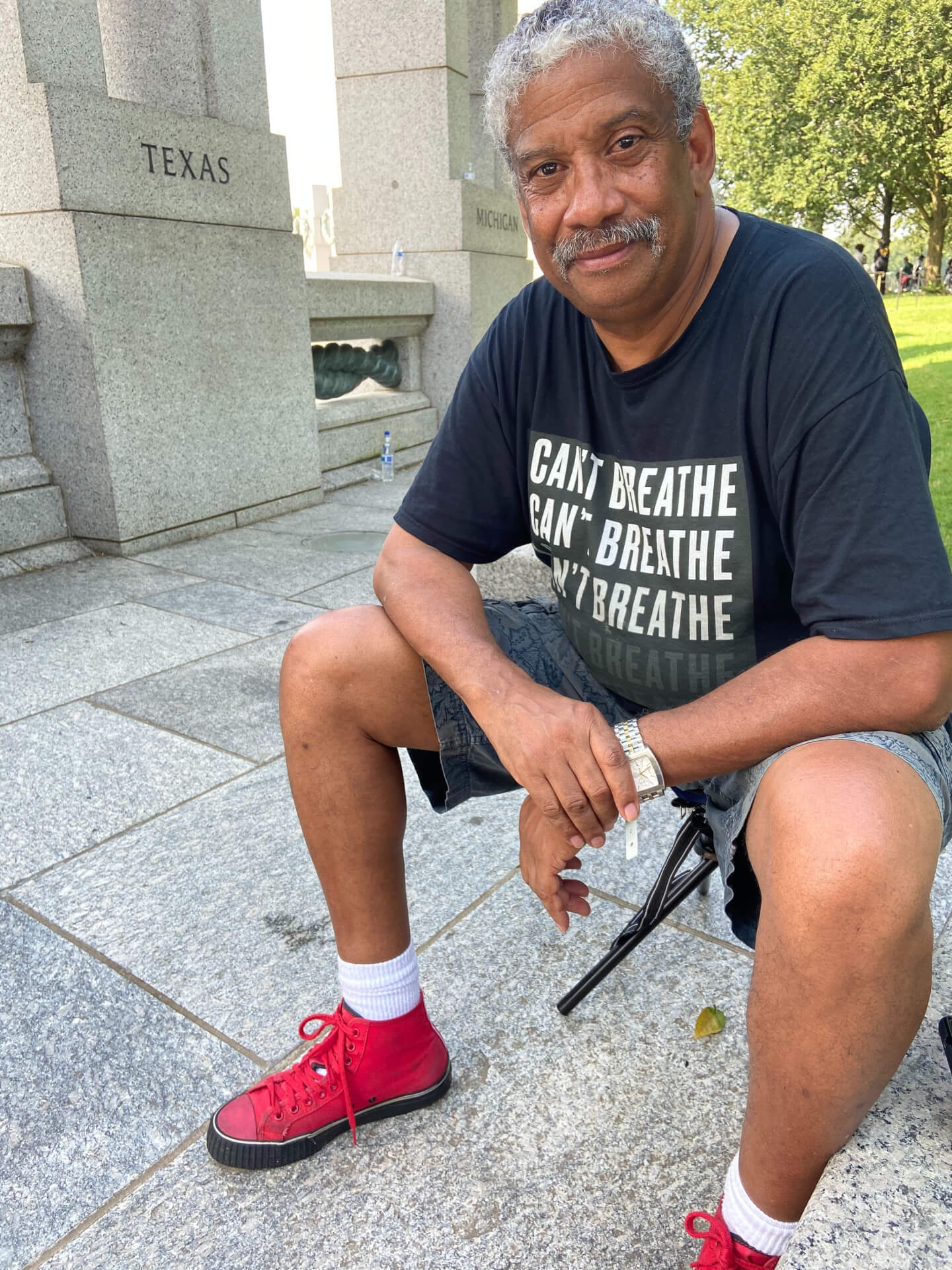 Michael Eugene Robinson, a retired educator from Baltimore, attended the original march as a child and returned Friday to support the movement and to “be part of the message.” Photo by Allison Stevens

Michael Eugene Robinson, a retired educator from Baltimore, attended the original march as a child and returned Friday to support the movement and to “be part of the message.”

He said he was especially inspired by the many young activists in attendance. “This is a very important demonstration of unity,” he said. “I got hope for America.”

Speakers called for the Republican-controlled U.S. Senate to pass a bill already approved by the Democratic House that would limit qualified immunity as a legal defense for police misconduct, reduce the use of chokeholds and no-knock warrants and create a national database of officers accused of misconduct.

The Rev. Frantz Whitfield of Waterloo, Iowa, president of a National Action Network chapter whose plans to travel to the march were scuttled by the derecho storms in the state, said police reform was his priority.

“There are a lot of things that need to be addressed, but police reform is the biggest one,” he said by phone. “When you talk to any African American in Iowa, they are afraid to go to certain areas of town or certain areas of Iowa based off of the fact that they’re afraid of what the police might do to them.”

But many said police brutality was only a symptom of deeper racial injustice in the United States.

“Black people face a symbolic chokehold every time we walk, speak up, shop, jog, drive, and — yes — breathe,” said U.S. Rep. Joyce Beatty (D-Ohio). “So we must tear down the walls of injustice.”

Several speakers referenced Lewis, the civil rights icon who died this summer. Many called for the passage of another House-passed bill, a measure named for Lewis that would strengthen federal enforcement to protect voting rights.

“Until there is federal action, every state will do what it wants to do,” Sharpton said. “We need Mitch McConnell and the U.S. Senate to meet on the George Floyd Justice in Policing Act or we are going to meet you, senators, at the polls Nov. 3, whether we’ve got to mail in, walk in, ride in, crawl in. We want our bill passed.”

Sharpton compared Trump to Bull Connor, the police commissioner in Birmingham, Ala., during the 1960s who opposed civil rights and used fire hoses and police dogs to attack demonstrators of the era.

Activist Frank “Nitty” Sensabaugh, who walked from Milwaukee to Washington for the event, said he was frustrated by the continued need to advocate for issues that animated Martin Luther King, Jr. and the civil rights movement of the 1960s.

All posts by Allison Stevens