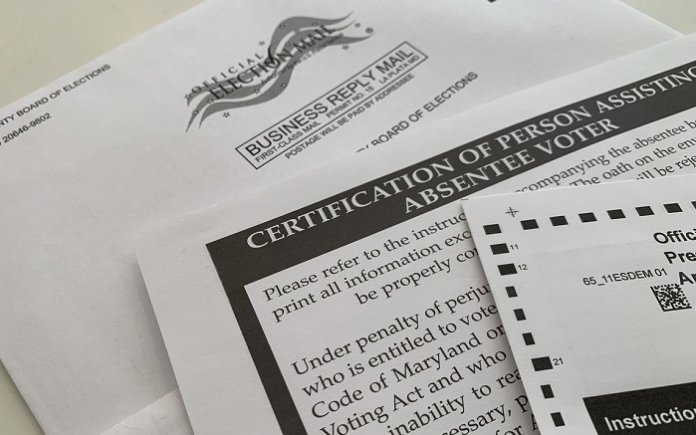 While Gov. Lawrence J. Hogan Jr. (R) says requiring voters to apply if they want mail-in ballots will make for a smoother election in November, states that have done so have seen mixed success.

Hogan announced on Wednesday that Maryland would hold a more traditional election in the fall compared with the state’s largely mail-in June 2 primary. Hogan’s plan provides that ballot applications be sent to every registered voter in the state.

Primary elections in the United States were delayed as the coronavirus spread like wildfire across the country. Maryland pivoted toward its first largely vote-by-mail election, while other states and jurisdictions required voters to use absentee ballots if they didn’t want to vote in person.

The District of Columbia, which ran a traditional election (allowing, as usual, voters to request absentee ballots) for its June 2 primary, recently announced it would mail every voter a ballot for the November election. The D.C. Board of Elections said in a recent report that it was overwhelmed by the massive amount of ballot requests in the short lead-up to the primary.

Voters in D.C. requested more than 92,000 absentee ballots and about 80,000 votes were eventually cast by mail.

“As time progressed, we discovered that several established, previously effective processes were severely strained or broken when four-times the previous absentee voter turnout occurred for this election,” D.C. election officials wrote in the report.

D.C. faced election errors similar to those in Maryland on election day: Many absentee ballots were delivered late, and voters who decided to go to the polls faced hours-long lines.

In Georgia, voters embraced absentee ballots after they were mailed applications for the state’s June primary. But  that state’s system seemed to crumble on election day. Many voters were left waiting for weeks before their ballot requests were processed, and some never received ballots at all.

Voters who showed up to vote in person in Georgia’s primary found malfunctioning voting machines and lengthy lines, The New York Times reported. Predominantly black areas experienced some of the worst errors, leading some to say that the election mishaps were a form of voter suppression.

In Wisconsin, thousands of voters reportedly requested absentee ballots before the state’s deadline, but didn’t receive their ballots in time to vote.

Late ballot delivery also was an issue in Maryland’s primary, where registered voters were supposed to be sent mail-in ballots automatically. Election officials blamed a vendor after thousands of voters received their ballots late or didn’t receive ballots at all.

David Garreis, the president of the Maryland Association of Election Officials, told Hogan in a Monday letter that local boards of elections don’t have the resources to process thousands of ballot requests.

“We cannot overstate the devastating consequences likely to result if the State of Maryland does not plan now to mail every voter a ballot for the 2020 Presidential General Election,” Garreis wrote.

Voting rights advocates and Democratic lawmakers have said requiring voters who want mail-in ballots to apply for them might weaken voter turnout. But those who support mailing an absentee ballot application to every registered voter say that process is more secure.

Other states have embraced that process, sometimes called universal absentee ballot applications, for the 2020 presidential election.

Ohio announced in June that it would be mailing all registered voters an absentee ballot application for the November elections.