Seeking to ride the tailwind created by the largest social upheaval in recent American history, two Democratic power brokers with deep Maryland ties declared, on Tuesday, their intention to right a longstanding injustice.

On June 26, the U.S. House of Representatives — led by Speaker Nancy Pelosi (D-Calif.) and Majority Leader Steny H. Hoyer (D-Md.) — will vote to make the District of Columbia the 51st state in the Union, the duo pledged.

The measure would convert residential portions of the capital city into the State of Washington, Douglass Commonwealth, with two senators and a voting representative. Parcels containing the Capitol, the U.S. Supreme Court, the National Mall and various other buildings would be fashioned into a new, much smaller federal enclave.

At a rare in-person news conference held in the basement of a largely-deserted Capitol, Hoyer, Pelosi, Norton and D.C. Mayor Muriel Bowser (D) tied the decision to move the bill now with the movement spawned by the police-custody death of George Floyd in Minneapolis, a wave of energy and outrage that has transformed the nation’s politics.

“If D.C. were a state, it could not be shortchanged, as it was under the CARES Act,” said Hoyer, whose Maryland district lies just outside the District line. “And its residents would be protected from the kinds of civil rights violations we saw in Lafayette Square.” 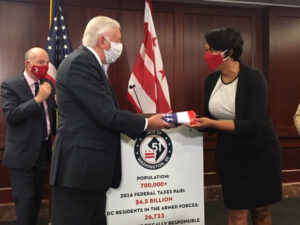 “This is not just an issue of local governance and fairness. It is a major civil rights issue as well. We must bring to an end the disenfranchisement of 700,000 American citizens, more than Wyoming, more than Vermont,” he added.

The District was created in 1790 with land ceded from two of the original colonies, Maryland and Virginia. Since then, residents of the capital city — most of them African-American, many low-income — have essentially been political non-entities, forced to pay taxes to a country that refused to grant them equal standing.

“For more than two centuries, the residents of Washington, D.C. have been denied their right to fully participate in their democracy,” Baltimore-born Pelosi said.

“Instead they have been dealt the injustice of paying taxes, proudly serving in uniform in great numbers and contributing to the economic power of our nation while being denied the full enfranchisement which is their right,” she added.

Pelosi noted that her father, former congressman Thomas D’Alesandro Jr., served as chairman of the House District of Columbia appropriations subcommittee, a post that made him “the unofficial mayor of Washington,” because the city lacked even basic home rule until decades later, in 1973.

“This is personal for me,” she said. “Statehood for the District of Columbia is in my DNA.”

Although 40 senators have signed on to H.R. 51, the measure faces an uphill fight in the Republican-controlled U.S. Senate. But advocates hailed the news as a major step forward.

Norton’s great grandfather Richard Holmes was a slave who traveled to D.C. after he escaped from a Virginia plantation. His journey represented “a walk to freedom, but not to equal citizenship,” the D.C. delegate said.

Bowser, who lacks control of the D.C. National Guard that governors enjoy over their National Guard units, described the frustration of watching as federal troops barreled over peaceful protesters outside the White House on June 1.

Video images of that encounter were carried live, giving the public a view of what she described as “just a chick mayor from Washington, D.C. having to fight an army.”

A bill ending the president’s power to federalize the city’s police force is pending before Congress.

The use of tear gas and rubber bullets outside the White House came just weeks after city leaders were forced to insert themselves into national discussions about the COVID-19 response, to ensure that D.C. was included in relief efforts.