But the numbers in the point-in-time census aren’t decreasing everywhere. While the count registered decreases in the homeless populations in Montgomery and Anne Arundel counties and Baltimore City, other parts of the state saw increases, including Baltimore County and parts of Western Maryland and the Eastern Shore.

In Baltimore City, there were still thousands of homeless, amounting to more than a third of the total homeless population in the state.

And advocates say homeless youth are consistently undercounted in such surveys – and in desperate need for services.

Focusing on the youth

A joint legislative committee – which was meeting at the same time as the new numbers were announced – is focused on a persistent gap in services for homeless youth, particularly those without an adult guardian.

“We’re always glad to hear the numbers have gone down, but it doesn’t seem to be the same for youth homelessness,” said Del. Carol Krimm (D-Frederick), who is chairing the Workgroup to Study Shelter and Supportive Services to Unaccompanied Homeless Minors.

At the legislative meeting, Ed Hinde from the Student Homelessness Initiative Partnership of Frederick County (SHIP) – which saw a 7.4 percent decrease in overall homelessness during the point-in-time count – said the county has seen an increase in youth homelessness. During the last school year, SHIP helped 855 children who experienced homelessness, including 155 unaccompanied youth, a figure that’s up 62 percent since 2017.

Sen. Mary L. Washington (D-Baltimore City), who co-chairs the Joint Committee to End Homelessness with Del. Geraldine Valentino-Smith (D-Prince George’s), said the summer workgroup will be laser-focused on writing legislation to drive down such figures.

“The need is well-documented,” she said.

By December, the group will recommend changes to state law that would help provide shelter to homeless youth. But any recommendations will come with some barriers, such as liability for shelters and a funding crunch.

The panel was born from a bill introduced last session that would have changed state law to allow unaccompanied youth to consent to shelter services. Many nonprofit homeless shelters in Maryland choose not to house unaccompanied minors because it’s unclear in state law whether they can consent.

The bill would have generally followed the rules that govern federally funded facilities that house homeless youth. There are only four such facilities in the state of Maryland, with a limited number of beds in Baltimore City and Prince George’s and Charles counties.

Krimm said there is a clear intent by the General Assembly to consider legislation next year to help children find shelter.

In this past year, Hogan and lawmakers budgeted an additional $1 million dedicated specifically to youth homelessness programs. The Department of Housing and Community Development is in the process of awarding those grants now.

Full statewide results from the point-in-time count, which took place in January and show statewide trends among those who are homeless, such as veterans or youth, and causes of homelessness, have not yet been released publicly. A full report will be published later this year. 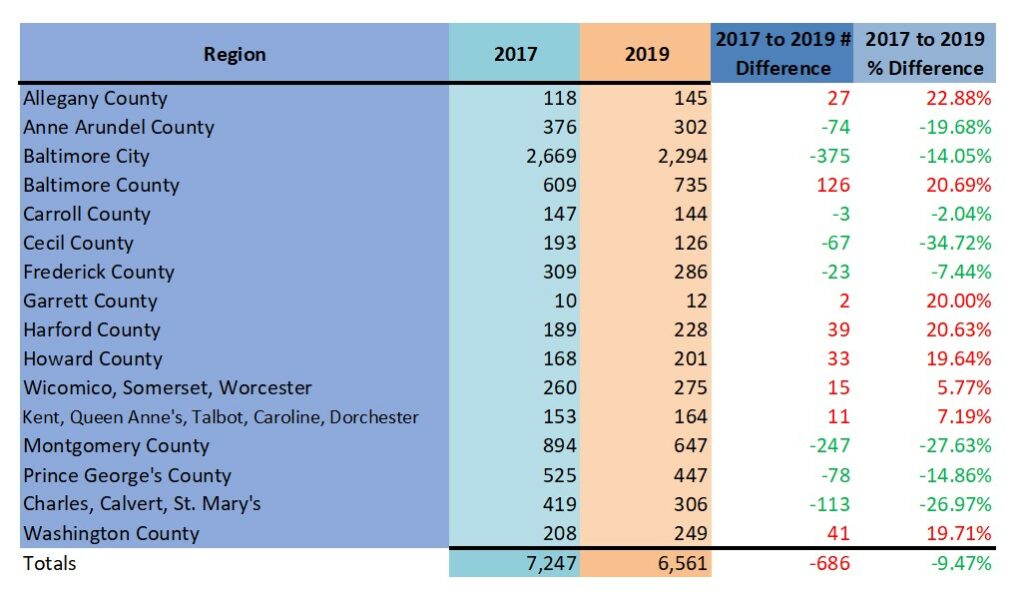 In a news release, the state said the overall number of homeless people captured in the point-in-time count decreased by 686 people, or 9.47 percent.

According to the report, the number of chronically homeless individuals dropped by 14.8 percent statewide and veterans experiencing homelessness declined by 8.58 percent.

“We have made significant progress in preventing homelessness in Maryland by partnering with local housing and community development programs, and their good work and dedication are integral to our efforts,” Hogan said in a statement. “We have improved the administration and delivery of state and federal resources, and have supported significant projects that have contributed to this impressive reduction.”

While considered the most nationally comprehensive program to quantify homeless who are both in shelters and unsheltered, point-in-time counts are not without limitations. They capture a one-day census, with some differences in methodology between communities. The census also frequently undercounts homeless youth, who are often seeking shelter on a day-to-day basis, away from the large encampments or shelters where numbers are taken.

In 2017, the state streamlined administration of several programs into one Homelessness Solutions Program, creating a more efficient process for funding and reporting to provide services. The state spent more than $47 million for services to more than 76,000 people who were homeless or in danger of becoming homeless statewide during Hogan’s first term, the governor’s office said.

The new state office also supported projects including the opening of the Lower Shore Shelter in Somerset County, which previously was the only county in Maryland without a shelter, the expansion of emergency cold-weather sheltering for homeless individuals in Charles County, and financing of HELP Veterans Village, which provides 75 units of newly renovated and newly constructed housing for at-risk and formerly homeless veterans at the Perry Point VA Medical Center in Cecil County. The department also recently hosted a symposium that brought together 200 providers and youth to come up with strategies to address youth homelessness.