Already the recipient of withering criticism from the Montgomery County Council and public safety unions over the reliability of the county’s aging emergency radio system, County Executive Marc B. Elrich (D) is now getting hammered by Gov. Lawrence J. Hogan Jr. (R) as well.

Hogan let loose on Twitter on Wednesday, accusing the first-term exec — with whom he has recently feuded — of neglecting a “public safety emergency.”

“As governor, I am committed to making sure that our law enforcement, firefighters, and first responders are equipped with the technology they need to do their jobs,” Hogan wrote. “Reliable communications can mean the difference between life and death.” 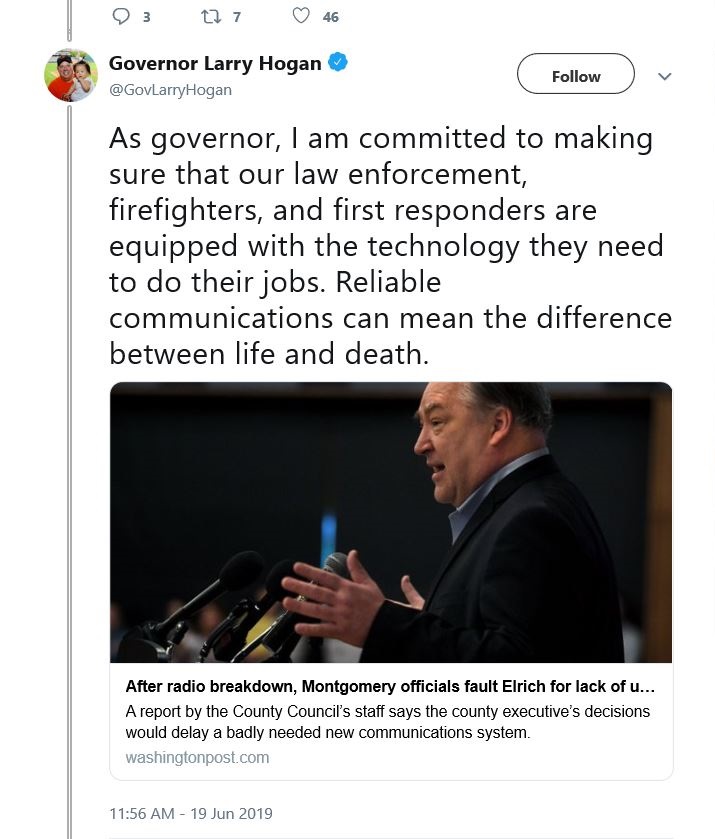 The governor posted a link to a Tuesday story from The Washington Post in which council members blasted Elrich over a lack of “urgency” in fixing the county’s public safety radio system, which experts say should have been replaced long ago.

Last month, the system went down for 14 hours, an outage that required police officers, firefighters and paramedics to communicate via their personal cell phones.

The issue is one that Elrich, who took office in December, inherited from his predecessor, three-term executive Isiah Leggett (D), but several members of the council accused him of not acting quickly enough to address the issue.

One lawmaker — like Elrich, a Democrat — called the administration’s approach “absolutely outrageous.”

“Inexplicably, some Montgomery County officials are considering standing in the way of a radio tower that is critical to our first responders,” Hogan wrote on Twitter.

“I proudly stand shoulder-to-shoulder with our firefighters on addressing this public safety emergency,” he concluded.

Hogan did not mention Elrich by name in his mid-afternoon tweets.

The executive has been a persistent critic of the governor’s plans to widen the Capital Beltway (I-495) and Interstate 270, and the two men did little to hide their irritation with one another when Elrich testified before the Board of Public Works, which Hogan chairs, earlier this month.

In what some viewed as a breach of protocol, Hogan announced at the last minute that people testifying before the panel would be limited to 60 seconds.

Though the rule was not strictly enforced, Elrich made his frustration apparent. A policy wonk who had intended to praise Hogan for using his position to address the issue of traffic in the Washington, D.C., suburbs, Elrich was also eager to offer suggestions for easing traffic at lower cost.

Hogan appeared unmoved, and Elrich bolted from the State House before the panel voted on the item in question.

The Elrich administration late Wednesday night rejected suggestions by Hogan and other critics that public safety in Montgomery County is being compromised.

“The County Executive is committed to doing everything possible to ensure that the people of Montgomery County are safe,” spokesman Barry Hudson said in a statement provided to Maryland Matters. “Every action that he has taken to improve the public safety communication system over the last few months has been done with a sense of urgency and concern for public safety.”