Two days out from a key vote on the Hogan administration’s controversial plan to widen two Washington, D.C.-area highways, opponents ratcheted up their pressure Monday on Comptroller Peter V.R. Franchot (D), considered a swing vote on the influential Board of Public Works.

While Franchot, a former state legislator from Montgomery County, was being briefed on the plan by staff, local leaders publicly urged the state to adopt a vastly different approach to the capital region’s traffic woes, and a large coalition of civic, environmental and transportation groups portrayed Hogan’s proposal as poorly conceived, overly expensive, and harmful to parks and air quality.

They also faulted the administration for failing to work collaboratively with county officials in the Washington suburbs.

There were several developments:

— Montgomery County Executive Marc B. Elrich (D) and local leaders from his county, Prince George’s and Frederick held a news conference to tout an alternative transportation plan that they claimed would provide more congestion relief at lower cost and with less impact on surrounding communities than the state’s plan.

The press conference was held in Indian Spring Terrace Local Park, a community playground, popular with families and dog people, that abuts the Beltway. Part of the park would be taken to widen the highway if the Hogan plan goes through, officials said.

The officials urged the Maryland Department of Transportation to abandon Hogan’s proposal to have private sector firms construct and maintain four express toll lanes — two in each direction — on the Beltway and I-270. As conceived by the state, a public-private partnership would finance the additional lanes in exchange for the right to collect variable tolls on them for 50 years or more. 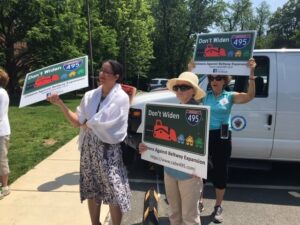 Instead, they pressed for a multi-modal approach that would include lane-widening, rush-hour use of shoulders, reversible lanes, improved transit and incentives to encourage telecommuting.

They also call for the state to widen I-270 between Interstate 370 and Frederick County, and a push to get southbound I-95 traffic onto the under-utilized Intercounty Connector (MD 200) to reduce traffic on the Beltway in Montgomery County.

“We are 100 percent for congestion relief,” said Councilman Tom Hucker, chairman of the Montgomery County Council Transportation Committee. “But MDOT’s process has shut us out. They have not accepted our recommendations to make their proposal workable.”

— Also on Monday, nearly 60 lawmakers sent a letter to the three-member Board of Public Works, urging them to reject the Hogan administration’s request to formally designate the I-495/I-270 project as a public-private partnership and the proposed process for soliciting bids from would-be road-builders.

The agenda items, set for a vote Wednesday, are preliminary but important steps in launching MDOT’s plan.

The board is made up of Hogan, Franchot and Treasurer Nancy K. Kopp (D), like Franchot a former state legislator who lives in Montgomery County.

Lawmakers urged the board to break the plan into three pieces and vote on each one individually.

They also want the state to complete an environmental review before the board takes action. The Hogan administration wants the environmental impact statement and solicitation work done simultaneously, in order to speed relief to weary commuters.

— The board also received a letter from 43 environmental, transportation and civic organizations urging Franchot and Kopp to reject Hogan’s plan. 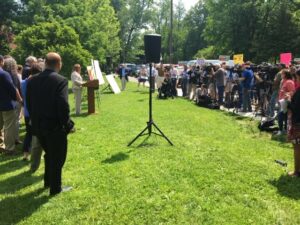 Opponents of the governor’s traffic plan press for a new approach that would include lane-widening, rush-hour use of shoulders, reversible lanes, improved transit and incentives to encourage telecommuting. Photo by Bruce DePuyt

The groups warn that parks, streams and air quality could be damaged by construction and the likely increase in vehicle miles traveled. And they claim that pricey tolls might make new lanes available only to high-income commuters.

“This proposal fails to protect the best interests of Maryland’s taxpayers, communities, the environment and ignores sensible alternatives included in County Master Plans,” the letter states. “This proposal tramples years of transportation planning and research by placing the political agenda of private construction companies over the wants of Maryland citizens.”

Franchot spokeswoman Susan O’Brien said the comptroller has been meeting with MDOT officials, including Transportation Secretary Pete K. Rahn, local officials such as Hucker, and groups like the Sierra Club, in addition to his briefings from his staff and Hogan aides.

She said he has yet to decide how he will vote.

“He’s going to ask a lot of tough questions on Wednesday,” she said. “He’s actually in meetings right now with stakeholders. He’s been meeting for weeks with people on all sides of the issue.”

In a statement, Michael Ricci, Hogan’s spokesman, accused the legislators of spreading “misinformation.”

“Good news. We are well on our way to doing all of the things that these legislators request,” he wrote. “We look forward to implementing these ideas as part of our plan to fix the region’s soul-crushing traffic.”

Ricci said “each phase of the project will indeed come before the Board of Public Works” and that MDOT has convened a transit working group to advise Rahn and his team.

He also noted the state is concurrently conducting the environmental review required under federal law.

In response to the press conference held by local officials from Montgomery, Prince George’s and Frederick, Ricci called it “encouraging” that local leaders “have changed course and finally presented their own congestion plan.”

Hucker disputed this charge, saying that local leaders have advocated for the majority of transportation improvements they’re urging the state to adopt, in priority letters going back a least a decade.

Said Elrich: “Our doors are open. My mind is open. But I want real solutions; I want solutions that last.”