Baltimore County Executive John A. Olszewski Jr.’s proposed budget represents a courageous effort to address the county’s fiscal challenges. He has operated with an unprecedented level of transparency, fought for increased accountability, and made the right decisions to put the County’s fiscal house in order.

As the County Council considers changes to his proposal, I encourage them to remember that the path to sustainability is a multi-year process. I hope the Council will look at the Fiscal Year 2020 budget as the foundation for the next several budget cycles, not a one-year exercise. The Commission of Fiscal Sustainability, that I was proud to chair on behalf of the county executive, focused from day one on the concept of fiscal sustainability, as opposed to a one-year fix. The county executive’s budget is designed to do just that.

Mr. Olszewski inherited a significant challenge. I know because I was part of the team that developed the budgets that created the current budgetary pressure. Although I believe the spending in past years was dictated by unique circumstances, particularly in the area of school construction, the reality is that those expenditures now make it necessary to get the county’s fiscal house in order.

In the past, revenue projections were too optimistic. In fact, one of the major recommendations of our commission was to develop revenue projections in a more collaborative way with the legislative branch to ensure better estimates. Having said that, last year’s budget message did make the following comment regarding the FY 2020 budget: “It is assumed that a sizable infusion of new revenue will be approved in FY20 in order to meet the assumptions of this forecast. Without this new revenue, dramatic reductions in services and fundamental costs will be needed.”

In retrospect, that item should have been highlighted and communicated more directly to county citizens. I regret that we did not do that.

Mr. Olszewski hung a lantern on this problem. He held seven town hall meetings where he told residents the truth about what he found. The county had whittled down its fund balance by spending on capital projects. It had depleted its fund for retiree health and life insurance benefits. And it made promises on school construction based upon a level of commitment from the state that did not materialize. In fact, the county executive’s decision to no longer fund projects that have not received state funding is prudent and was also supported by the commission.

In addition to being transparent, the county executive listened.

Well over 1,000 residents attended his town halls, and more than 500 stood up and spoke to what they want to see in Baltimore County. Most advocated for more investment in the community – not less. They felt that the county has underinvested in education and infrastructure. They wanted new schools, more sidewalks, new senior centers, additional Police Athletic League facilities, and other quality of life investments. 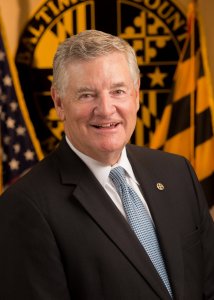 Mr. Olszewski directed the commission to take a top-to-bottom look at the county’s finances. He did not ask us to figure out how to get through one budget year. He asked us how to overhaul the county’s budgeting practices, so we are on the path to long term sustainability. His FY 2020 budget – especially on the revenue side of the ledger – will help Baltimore County achieve that sustainability. It is critical for the Council to increase revenue not only to get through FY 2020, but to prepare to implement Kirwan Commission education funding mandates and other out year unknowns.

The county executive knows his work is not finished when his budget is passed. He understands Baltimore County does not do enough to measure outcomes. Our commission recommended the development of a robust outcome driven budgeting system – as my colleague Carolyn Colvin says, “If you can’t measure it, we can’t invest in it.”

This system will undoubtedly identify additional efficiencies, which the county will be able to reinvest in public education and other priorities. But even the best outcome based system cannot solve the county’s problems without an infusion of new revenue.

At this point, I have a special request for my Republican friends on the Baltimore County Council. I know that it is difficult to take a realistic look at the need for additional revenues in the world of Trump that now dominates your party. But that is exactly what I am asking you to do.

It is simply not fair to take the easy road and beat the drum for no tax increases and then ask for the same increased school funding, infrastructure improvements, public safety upgrades, and quality-of-life improvements requested by those willing to support increased revenue. That’s just not fair. So I hope that you will be willing to look your constituents in the eye and say, ”No one likes to increase taxes, even when we haven’t done so in 30 years, but we have real needs and someone has to help pay for those improvements. This is the right thing to do.”

In his budget address, Mr. Olszewski said, “Great communities are not built by accepting the status quo. To the contrary, they are built by being bold, looking toward the future and envisioning what is possible.” The county executive took bold steps to address the county’s fiscal challenges which will lead to a better future for Baltimore County.

The writer is a former Baltimore County executive.