A Maryland lawmaker who used a racial slur while talking with colleagues at an Annapolis bar in January has resigned from a leadership post under pressure from the House speaker and the Legislative Black Caucus, but she signaled that she intends to remain in office, despite the uproar her remarks have provoked.

Del. Mary Ann Lisanti (D-Harford) released a statement on Tuesday afternoon apologizing for her “word choice.” She also said she has agreed to participate in sensitivity training.

“I understand that the use of inappropriate and insensitive language is not acceptable under any circumstance,” the lawmaker said. “I am sorry for the hurt I have caused and will do everything I can to help heal that pain and regain the trust of my colleagues and constituents.”

“I pray for forgiveness.”

The Washington Post reported on Monday that members of the Legislative Black Caucus met with Lisanti on Monday night “over allegations that she told a white colleague, during an after-hours gathering at an Annapolis cigar bar, that when he campaigned in Prince George’s on behalf of a candidate last fall he was door-knocking in a ’n—– district.’”

Lisanti apologized to the caucus’ leadership team for her use of the offensive term even as she said she didn’t recall using it, a conflicting explanation that appeared not to calm the controversy.

Asked by the Post whether she had ever used the term, Lisanti replied: “I’m sure I have. . . . I’m sure everyone has used it. I’ve used the F-word. I used the Lord’s name in vain.”

House Speaker Michael E. Busch (D-Anne Arundel) issued a statement on Tuesday after meeting with leaders of the black caucus.

“While I believe her apology was heartfelt, the damage among her colleagues and the public has been done,” Busch said.

The speaker said he has removed Lisanti from her post as head of the unemployment insurance subcommittee because “I believe that leaders in the House need to be able to bring people together — not tear them apart.” 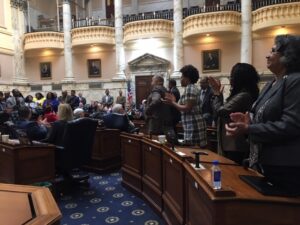 Members of the Legislative Black Caucus stand to be recognized on the House floor Tuesday. Photo by Bruce DePuyt

In a letter distributed by the speaker’s office, the black caucus accused Lisanti of a “blatant act of racism” that had marred Black History Month, “a month which celebrates the rich history, culture and progressions of African-Americans.”

“While Delegate Lisanti did provide an apology for her bold and offensive actions,” the letter continued, “we feel as though her apology is woefully inadequate.”

The letter, signed by Del. Darryl Barnes (D-Prince George’s), the caucus chairman, said Lisanti is “unsuited to continue in a position of leadership in the Maryland General Assembly. We have been receiving calls for her resignation, removal of a subcommittee chairmanship, and to be censured on the House floor.”

“We are asking the speaker to move swiftly in reprimanding her in a disciplinary manner. The use of a derogatory term exhibits that she does not hold the requisite contrition to be entrusted in a leadership role moving forward.”

Whether Lisanti will ultimately be censured or pressured to resign remained unclear at day’s end.

Fifty-six members of the 188-member General Assembly belong to the Legislative Black Caucus, a record high. On the House floor Tuesday, a dozen members of the caucus stood to make announcements, including recognition of colleagues’ birthdays and committee, subcommittee, delegation and caucus announcements.

It was seen as a way of noting the Lisanti controversy without directly addressing it.

“She had many firsts, but she also was not the last,” Wilkins said.

During her remarks, Wilkins asked the members of the Legislative Black Caucus who represented any first or who had blazed a trail in some way to stand alongside her on the floor.

“I would like to ask all members of the black caucus to stand as we recognize and commemorate our Black History Month and our contributions to the United States and in this chamber and stand unified in our commitment to bettering the lives of African Americans and all residents of Maryland,” Wilkins said, as members of the caucus joined her in standing, to a round of applause.

In his statement later in the day, Busch held out the possibility of redemption for Lisanti, but took pains to make no promises regarding her future.

“I hope that through the sensitivity training that Delegate Lisanti has agreed to and the help of her colleagues, she will develop a greater understanding of the impact that she has had on her fellow legislators and the entire House of Delegates,” Busch wrote.

“Like anyone who has made a mistake, she has the opportunity for redemption – but it is her responsibility to do so and earn back the trust of her colleagues.”

On the same day that the Lisanti news dominated the discourse in and around the State House Tuesday, the Maryland Democratic Party announced a new “diversity training requirement.”

The party’s initiative would make diversity, equity and inclusion a mandatory part of all training offered by the MDP and would make “diversity in hiring and contracting [a] fundamental aspect of party operations,” among other actions.

Without referencing the Lisanti controversy directly, the party’s announcement said the initiative was prompted by “rising incidents of hate crimes and displays of general ignorance, insensitivity and intolerance.” The last words in that sentence of the party’s news release linked to Monday’s Washington Post report.