Gov. Lawrence’s J. Hogan’s second-term inauguration was full of pomp and circumstance earlier this month – fitting for the first Republican governor to be reelected in Maryland since 1954 and the newfound darling of the national center-right punditocracy, which sees the governor as a plausible possible alternative to President Trump. It came complete with a military fly-over, a 19-gun salute, and praise from a celebrity fellow Republican and Trump antagonist, former Florida Gov. Jeb Bush.

A few days earlier, state Attorney General Brian E. Frosh (D) slipped into Hogan’s office to be sworn in for his second term. Accompanied by his wife, Frosh raised his right hand, took the oath of office, got his picture taken, and went back to work.

On Monday, it was time for the last of the statewide elected officials to be sworn in for another term to take his turn. And because this was Comptroller Peter V.R. Franchot (D), entering his fourth term following a record-smashing victory in November, it was a showy display of politics, messaging and stagecraft.

In a theater at the University of Baltimore, with more than 200 friends, fellow politicians and staffers in attendance, Franchot shared the stage with his family, two faith leaders, an honor guard from the Baltimore County Sheriff’s Office, and no less than seven politicians – each of whom got a chance to extoll Franchot’s virtues.

Nothing is subtle in Franchot World.

The theme of the event was “the lighted path forward.”

Hogan was there to administer the oath of office and testify to Franchot’s commitment to bipartisanship. Half a dozen of his cabinet members came along.

“I have always found him to be honest, direct and principled, time and time and again,” the governor said. “Despite the pressure from some people in his own political party, he has put the people of Maryland ahead of his own interests and ahead of partisan interests.”

Just as Hogan is now enjoying a flurry of attention amid speculation that he could be a White House contender in 2020 or 2024, Franchot is being discussed as a possible candidate for governor in 2022, when Hogan’s term expires.

But when you’re 71, as Franchot is, and have been in public office for 32 straight years, as Franchot has, it’s hard to present yourself as something new. So you import new energy with three rising stars – state Sen. Cory V. McCray (D-Baltimore City), age 36, state Del. Julian Ivey (D-Prince George’s), age 23, and Salisbury Mayor Jacob R. Day, age 36. 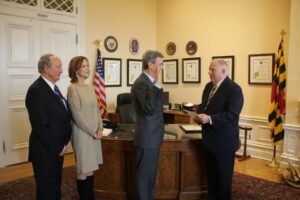 McCray, who has become known as a tenacious campaigner, praised Franchot’s own tenacity on the campaign trail, and marveled at the comptroller’s ability to bring his message to every corner of the state. He too noted Franchot’s bipartisanship, and said that Franchot, with his willingness to battle fellow politicians, is “a driver” of the political conversation in Maryland.

Ivey compared Franchot to the late basketball star “Pistol” Pete Maravich – who, in fact, was an electric if somewhat erratic player and not necessarily a “straight shooter,” which is how Ivey characterized him.

“He’s done his job with a sense that the power of the people is more important than the people in power,” Ivey said.

Day talked about the voters’ view of Franchot “from my corner of Maryland.”

“It’s energizing to see elected leaders that not only lasso rhetoric to paint a picture of a better Maryland but prove, like Peter Franchot does over and over again, that cooperation, creativity and collaboration improves the lives of Marylanders,” he said.

Baltimore County Board of Education Chair Kathleen S. Causey spoke as a beneficiary of Franchot’s battles to ensure that schools are sufficiently warm in the winter and cool in the hotter months.

Also speaking were Baltimore City Comptroller Joan M. Pratt (D) and former Baltimore mayor Kurt L. Schmoke (D), now the University of Baltimore president – both were testament to Franchot’s latest attempts to up his visibility and political outreach in the city.

“The lighted path forward is embodied by a new approach to public policy – one that measures one’s commitment to an issue not by the amount of taxpayer money that we are willing to spend, but by the results that we demand in return,” he said. “It takes the form of a state government that is less preoccupied with grandiose promises than it is with answering the phone, greeting our taxpaying customers with respect, and pulling out all the stops to solve the problem.

“It is a political culture where our leaders place genuine trust in the wisdom and common sense of those who have hired us and who pay our salaries. It is an economic approach that devotes less time and energy to competing for global corporations that demand billions of dollars of taxpayer money and devotes more time and energy to tearing down barriers for those small, local businesses that ask for nothing more than an honest chance to succeed in the marketplace.”

Franchot – who as a member of the House of Delegates in the early 2000’s endorsed a legislative redistricting plan hatched by political insiders, though later thrown out in court, that would have put a powerful white lawmaker from Chevy Chase in his majority-minority district – embraced Hogan’s longtime proposal to make redistricting a nonpartisan affair. He also said that both political parties should allow unaffiliated voters the option of voting in their primaries.

Whether Franchot’s speech was designed to lay the groundwork for a future gubernatorial run is hard to say. But he left no doubt that he continues to plan to be more than a mere tax collector during his fourth term.

“These next four years,” Franchot said, “promise to be the most rewarding of my career.”