Even the most high-profile rallies during the 2019 legislative session will be less visible. No longer will rally-goers gather under the gaze of Gov. Lawrence J. Hogan Jr. (R) from the governor’s mansion or crowd Lawyers’ Mall, amplifying their messages as lawmakers walk from their offices to the State House.

With Lawyers’ Mall torn up for an ongoing project to replace the aging infrastructure below, the largest rallies on the State House complex will be moved down Bladen Street, beyond the House and Senate office buildings, to a courtyard between the state’s treasury and revenue buildings. The courtyard is about a two- or three-minute walk from Lawyers’ Mall, the historic home of rallies and protests on the State House grounds.

Groups over 200 will have to meet at the courtyard, according to new guidance posted on the Department of General Services website and shared with freshmen lawmakers at an orientation last week.

Smaller gatherings will be accommodated in a grassy area to the rear and east of the House of Delegates building along College Avenue, said Nick Cavey, director of communications for the Maryland Department of General Services, which manages and polices state office buildings. 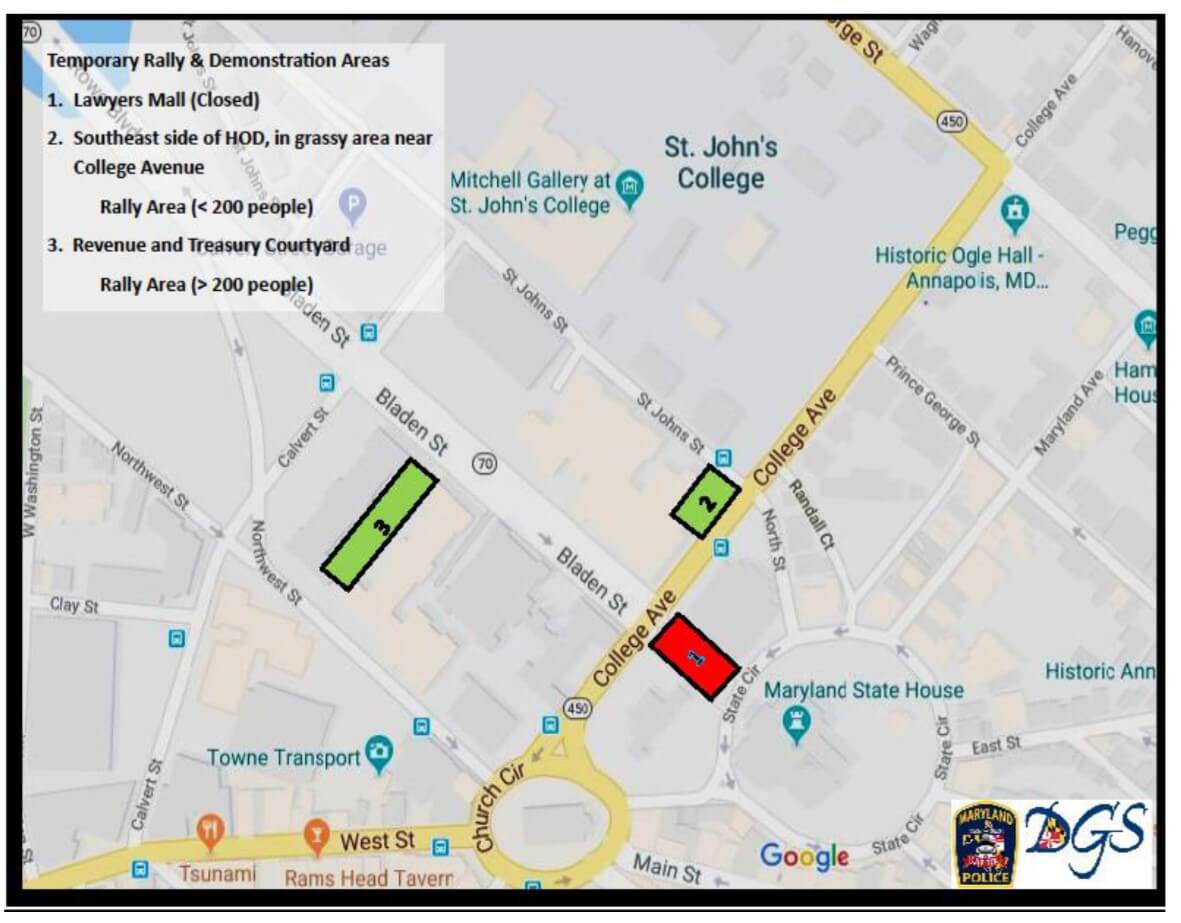 In August, the department announced details about the first phase of the project, which is expected to last about a year, includes replacing utilities from the front of the House office building across College Avenue and on a portion of Lawyers’ Mall. The statues of Thurgood Marshall, Donald Gaines Murray and Anonymous Children Representing Brown v. Board of Education were temporarily relocated in September.

Last week, Sean Johnson, assistant executive director for political and legislative affairs at the Maryland State Education Association, said the organization, which holds one of the largest annual rallies at the State House, was working with the Department of General Services to establish a location for this year’s event.

The oldest sections of the State House complex’s steam system are deteriorating and releasing steam, which required vents and pumps to be installed last year. The overall project is expected to cost about $11 million and will include full utility replacement, plaza replacement, new landscaping, and other improvements, according to the Department of General Services.

Lawyers’ Mall is expected to reopen in late 2020.

People can watch progress on the project via a live webcam.