Tens of thousands of Marylanders shuffled through early voting centers Thursday at a rate far outpacing four years ago ― and a few voters met the candidates for governor while they were out at the polls.

First-day early voting turnout more than doubled since 2014, according to the Maryland State Board of Elections.

Democratic gubernatorial nominee Benjamin T. Jealous said Thursday morning that he was pleased with the high turnout figures being reported even early in the morning.

“Early vote has started huge and that’s a good sign for us,” he said.

Jealous met up with his running mate Susan W. Turnbull and other elected officials and women leaders in Maryland to highlight his women-centered platform in Baltimore on Thursday morning.

Jealous and Turnbull highlighted his upbringing, by a grandmother who came to Baltimore to work for Planned Parenthood in 1941 to his mother, who was a plaintiff in a case to desegregate city schools.

“When we face historical challenges on the national level to women’s rights, with the president and his Republican colleagues seeking to turn back the hands of time in terms of women’s opportunities, we’ve got a leader in Ben Jealous and Susie Turnbull, who promise to fight,” Cummings said. “Fight for women, fight for everything it’s worth, to make sure that we have access to health care, that we access to reproductive rights, that we have somebody at the State House in the governor’s position who is ready to challenge the Trump administration and the Supreme Court.”

“We’re seeing record turnout of Democrats and record turnout of women voters, who are so motivated in this election year,” Matthews said, before boarding a school bus with Jealous and supporters to meet voters at the Mount Pleasant Ministries early voting center.

About 10 miles away in the afternoon, Hogan presented an official citation as governor and held a meet-and-greet as candidate at the White Marsh Volunteer Fire Company, before heading to the Honeygo Run Community Center, a popular early voting site in Baltimore County. 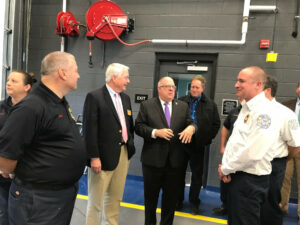 He was greeted by a small crowd of supporters and fellow Republican candidates.

“So Baltimore County’s going to make the difference, right?” Hogan asked the crowd, which answered with a resounding “Yeah!”

The governor stumped for other candidates as well. In a Facebook Live video captured by attorney general candidate Craig Wolf, Hogan predicted the Republican’s victory. “We’ve got 11 days. He’s going to surprise everybody,” Hogan said, pointing to Wolf.

Hogan said he’s encouraged by the turnout so far.

“We’re just excited to see people participating in the process,” Hogan said. “We feel really good about it.”

The governor said he was looking forward to an election night victory party, but was taking nothing for granted in the waning days of the campaign.

Hogan said he hopes his popularity ― he led Jealous by double-digits in a series of public polls this fall ― will help propel other Republican candidates in the state and break the Democratic supermajority in the State House.

“The reason I think that’s important is not really a partisan thing, it’s trying to bring some balance,” Hogan said. “Whenever one party has a supermajority of more than two-thirds in both houses and they can override every single veto, it makes it hard for us to be able to sit down and negotiate and come up with compromise and reach balanced solutions.”

Jealous also addressed the polls during his morning appearance.

“We stand here today with great hope,” he said. “You know, we lost every poll in the primary and then we won by 10 points. And in the process, we proved that this is about the voters.”

Early Friday morning, Jealous will meet commuters at Baltimore’s Penn Station and ride the MARC train while discussing his plans for improving transit. Hogan is holding a meet-and-greet at the Riderwood Retirement Community in Silver Spring before attending the Sandtown Annual Halloween Festival in Baltimore.

Under the past three presidential administrations, the working definitions of waters of the United States have shifted.