Maryland drivers can update their expression of Chesapeake pride and help with efforts to “Save the Bay” with a new license plate design that state transportation and environmental officials unveiled Thursday at Sandy Point State Park.

The artwork for the new license plate was created by Tina Cardosi and Sujen Buford of Frederick-based design firm TM Design Inc.

The new plate will be available for purchase beginning Oct. 29. It’s the third iteration of a Maryland bay-themed tag in 28 years.

“We worked along with the trust using focus groups of volunteer Marylanders, who told us that they wanted depictions of icons and wildlife unique to Maryland,” Buford said in a phone interview with Capital News Service.

The artwork for the final design — incorporating a crab and the Chesapeake Bay Bridge — was selected from among more than 250 submissions.

“The process for arriving at the selected design was incredibly thorough, took nearly a year, and involved two rounds of focus groups and online surveys,” said Erin Valentine, development and communications coordinator for the Chesapeake Bay Trust.

Cardosi and Buford worked diligently to make sure they represented the watershed environment in the most appealing way, according to an email statement from TM Design.

Cardosi said she had many sleepless nights due to the excitement and creative ideas that spurred her vision.

“I knew that a blue crab should be the focus. After all, everyone knows Maryland is for crabs,” she said. “Also, the Bay Bridge is the gateway to vacation in the state of Maryland.”

The Motor Vehicle Administration, Maryland Transportation Authority and the state police were also consulted throughout the design process, Valentine said.

Maryland vehicle owners will have to pay $20 over normal vehicle registration fees to own the plates.

Funds raised from these plate registrations go to the Chesapeake Bay Trust.

The trust is a nonprofit, grant-making organization dedicated to restoring the rivers, streams, forests and main body of the Chesapeake Bay watershed, according to its mission statement. 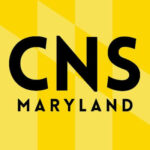 Seven percent of all licensed vehicles in the state have Chesapeake Bay Trust plates, and 12 percent of households across the state report that they have at least one set of bay plates in the family, according to the Maryland Motor Vehicle Administration.

Over more than 30 years, the program has awarded more than $100 million through more than 11,000 grants to fund watershed restoration projects, citizen outreach and engagement initiatives, and K-12 environmental education programs, according to Jana Davis, the trust’s executive director.

“I think it’s important for people to know that their $20 contribution goes through the trust and not to the trust,” Davis said. “Twenty dollars is about what it costs for us to plant a tree or send a student on a life-changing field trip experience.

“We make sure all of that money goes to such good use.”

There are more than 300,000 Chesapeake Bay Trust plates on the road today, Davis said.

“The new design will be the third design in the history of the program. The first Chesapeake Bay license plate was unveiled in 1990. The second design, which is currently on the roads, was unveiled in 2004,” Valentine said.

The popularity of the bay plate has been relatively steady over time, but tends to get a little bump when a new design comes out, Valentine said.

Changes and improvements in printing and manufacturing technology made the decision to update the design of the license plate easy, according to Davis.

“When we updated the design about 14 years ago, our color and illustration options were limited to four-color printing,” Davis said. “Now, with all the color and detail that digital technology enables, the sky’s the limit. We thought it was time we took advantage of that.”

The artist who lost sleep sorting through design possibilities in her head agreed.

“The vivid colors and crisp, detailed illustrations come together to form a unique and memorable plate that will represent one of our state’s most important aquatic and land resources – the Chesapeake Bay, ” Cardosi said.

Engineer: It’s indefensible to proceed with a $5B investment without first addressing all the credible questions raised about the transparency of the traffic modeling used to justify the project.