Internal polling suggests that the tightest Maryland Senate district in 2014 is likely to be tight again.

This time around the race to represent District 3 is fueled by a blue wave battling popular Republican Gov. Lawrence J. Hogan Jr.’s coattails in Frederick County, which is growing increasingly purple.

Republicans are hoping businessman Craig Giangrande, a first-time candidate, can capitalize on “Young fatigue” and a healthy fundraising account to win the seat and help shift the Maryland Senate from a veto-overriding Democratic supermajority.

But incumbent Sen. Ronald N. Young (D) said the Democratic enthusiasm in his district and in the county is at the highest level he’s ever seen — and he’s been part of the county’s political scene since the 1970s.

Since 2014, Democrats have nearly doubled their voter registration advantage in the district from 5,926 more Democrats than Republicans in 2014 to an advantage of more than 11,300 party registrants as of late last week.

While the Maryland Republican Party hopes Giangrande can win the seat as part of their “Drive for Five,” Democrats are pushing their own drive for five seats in the county’s eight-member General Assembly delegation. The Democrats’ efforts at a delegation majority is unlikely given wide Republican advantages in more rural District 4, but Republicans say Young’s Senate seat is within reach.

District 3 was the closest of a handful of close Senate races in 2014. Young garnered 50.8 percent of the vote that year to eke out a 614-vote win over policy expert Republican Corey Stottlemyer.

It was just after that race that Giangrande decided to enter. Talking with friends and family, they decided a candidate with a business background could be the recipe for Republican victory in the district.

The leading messages of his campaign are a vow to work with Hogan, enact policies that are friendly to small business and working families and getting Frederick County’s “fair share” of tax dollars back from the state.

While Republicans warn of a “Young fatigue” —the senator was alderman and mayor in the city of Frederick for 20 years before joining the Senate in 2011, and his wife and one of his sons are also seeking reelection to their elected offices in November — Young isn’t running away from his record in office. He’s been a reliable Democratic vote in the Senate on close issues, including veto overrides, and is being repaid for his loyalty in support from party leadership and colleagues in the chamber.

Young, who faced two challengers in this year’s Democratic primary but came out ahead with 43 percent of the vote, is campaigning on a platform that includes supporting a $15 minimum wage, funding universal pre-K and environmental protections.

Both candidates say they have been consumed with door-knocking and fundraising.

Young is targeting specific households that could decide the race: “soft” Democrats who didn’t vote in the last gubernatorial election and a contingent of more than 20,000 unaffiliated or third-party voters.

“They are the doors I’ve been knocking. We’ve mailed absentee ballot applications to them. I have other people going out to them,” Young said. “We’re really looking to try to turn out a huge portion of those people.”

For his part, Young predicts that Democratic turnout will be “way up.” The state party has opened a campaign office in Frederick and the Frederick County Democratic Central Committee is holding get-out-the-vote efforts and registration drives, hosts a podcast and regular phone-banking events.

“I think it’s the most active I’ve ever seen the party,” Young said.

But Hogan’s coattails are expected to be wide in Frederick County.

“Larry Hogan is going to get unprecedented numbers in Frederick County,” Hough said. “…That in itself is boosting all of our Republican ticket.”

When it comes to numbers in the District 3 race, Hough said it was a tossup.

“We’ve had some polling that shows a very spirited race,” Giangrande said. “We’re very happy with our progress. It shows our race within the margin of error and we’re very excited about that when taking on a 50-year politician.”

Young said polling he’s seen shows him up in a tight race so he’s taking nothing for granted. “I’m up in the polls a reasonable amount. Not a lot,” Young conceded.

Giangrande has made a fundraising splash, helping to boost his candidacy. Excluding $56,650 he loaned his campaign, Giangrande has raised just over $100,000. Since 2014, Young had raised just under $99,000 as of late August. 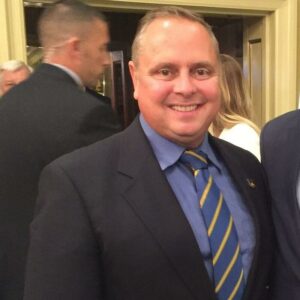 As of the last campaign finance deadline, the candidates were fairly evenly matched in campaign coffers. Giangrande had $62,797 still in the bank to Young’s $67,583.

The race has also attracted outside spending.

But with early voting starting late next week, the candidates are unlikely to meet in a debate to make anything clearer for voters.

On Friday, Giangrande issued a news release expressing frustration that a debate had not taken place. The campaign outlined multiple attempts to set something up since mid-September.

“A debate would be a great opportunity for residents to hear our plans. Unfortunately, Young has decided to back away from a debate., I think the people of our District deserve to hear from both Young and myself. It appears after voting for over 43 tax and fee increases, Senator Young does not want to be confronted by his very poor record.”

The Facebook post was followed up by a clumsy response from Young, who replied from a Facebook page in his wife’s name citing “technical difficulties” with his own Facebook page and said Giangrande’s campaign had distorted the sequence of events and that some of the Republican’s emails wind up in his junk mail folder, which contributed to them being unanswered.

However, on the substance, Young said he would have agreed to a debate by a neutral organization like the League of Women Voters or the local newspaper. Young said Giangrande’s campaign offered something hosted by college political clubs, including one in which his campaign staff is involved.

“If we don’t have one that has some significance to it, I’m not interested in doing it,” Young said in an interview with Maryland Matters. “I’d rather go out and knock doors.”