The effect Bernie Sanders can have on college students is so rousing you would think they were standing in line to board Noah’s Ark instead of waiting to hear a 77-year-old senator from Vermont talk to a reporter for an hour.

This was the atmosphere Wednesday night when The New York Times held its sixth installment of a live event series called “Get with The Times” at the University of Maryland, themed “Turn Up the Turnout” featuring Sanders being questioned by political correspondent Alex Burns.

The conversation was focused on mobilizing young people to vote in the midterms and encouraging the next generation of workers to become politically active. The event was streamed to remote watch parties at universities across the country. 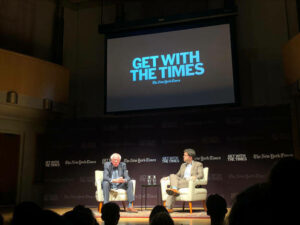 For an audience made up entirely of the age group with the lowest voter turnout rate, the buzzing excitement for the senator was almost ironic. At 7 p.m., one hour from Bernie, 200 students stood in a line that wove through the hallways of the Clarice Smith Performing Arts Center.

Burns and Sanders discussed a number of issues, ranging from raising the minimum wage to the FBI investigation of Supreme Court nominee Brett M. Kavanaugh, while remaining focused on their relevance to young voters.

“Your generation as young people will likely for the first time in the modern history of the country have a lower standard of living than your parents,” Sanders said.

He added, “If we do not take on the fossil fuel industry, you and your children and your grandchildren might be living on a planet that is unhealthy and uninhabitable … who do you think is going to stand up for your interests if you’re not going to?”

The story of Christine Blasey Ford and her allegations of sexual assault against Kavanaugh echo a tale too familiar for many young women, especially those in college.

The study featuring testimony from many female students echoing Ford’s story before the Senate Judiciary Committee and about their hesitation to report sexual assault knowing the slim likelihood of the “she said” beating the “he said.”

“What we want to do is create a climate where women who have been assaulted feel free to voice their concerns and positions,” said Sanders, who said he will oppose Kavanaugh’s nomination not only in light of the sexual assault allegations but also for his support for the 2010 Citizens United Supreme Court decision protecting corporations’ and unions’ rights to contribute unlimited amounts to political campaigns.

”According to the U.S. Census Bureau only 46.1 percent of registered voters aged 18-29 voted in the 2016 election though among this age group, Sanders received more votes during the presidential primaries than Hillary Clinton and Donald Trump combined.

Margo Sybert, a junior at the University of Maryland, said Sanders’ popularity among young people stems from his progressive ideas – especially in juxtaposition to Trump.

“I think a lot of students didn’t vote in 2016 and saw what happened that time,” she said. “Had more of us gone to the polls, Bernie could’ve been the president.”

Hopkins, who did not vote in 2016, filled out his absentee ballot for 2018 while waiting in line to see the senator. “I’ll give him this…he’s an entertaining guy,” Hopkins said. Sanders said he believes it’s up to everyday voters to revitalize American democracy.

He told the crowd that unlike Maryland basketball, politics is not a spectator sport.

“Being angry is not good enough,” he said, “Getting empowered is what it is about.”

The midterm election is on Tuesday, Nov. 6.

If you have not yet registered to vote or are not sure, you can visit the Maryland State Board of Elections to register or find out more information about your registration status, party affiliation or poll location.

How Paid Leave, Tax Cut For Rich And More Could Get Axed From Biden’s Social Policy Bill

Congressional Democrats cheered on the floor of the U.S. House after approving President Joe Biden’s massive social spending and climate bill. But a major…

A Maryland U.S. Senator unveiled legislation this week that would tax major oil and gas companies which emit greenhouse gases to help pay for the…