With the FBI poised to release its report on allegations against Judge Brett M. Kavanaugh, and a Senate vote on Kavanaugh’s nomination to the Supreme Court likely in a few days, Maryland Matters caught up with U.S. Sen. Chris Van Hollen (D-Md.) Wednesday to discuss the political drama engulfing the Capitol. Van Hollen has been opposed to Kavanaugh’s nomination for several days. But the debate has shifted since last week’s hearing involving Christine Blasey Ford, who accused Kavanaugh of sexually assaulting her in the early 1980’s while both were students at private Montgomery County high schools. Much of the storyline involves territory that Van Hollen has represented, in various legislative bodies, since 1991. And as chairman of the Democratic Senatorial Campaign Committee, he will help chart the Democrats’ political response to however the Kavanaugh nomination fight is resolved. 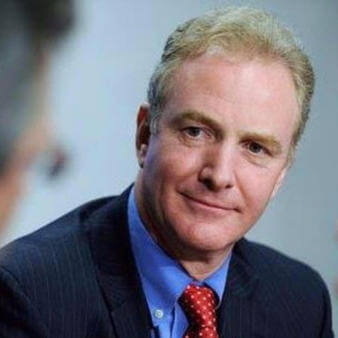 U.S. Sen. Chris Van Hollen  A lightly edited transcript of the conversation follows: Maryland Matters: Most Democrats opposed Judge Kavanaugh before last week’s hearing, because of his rulings and writings.  Did his demeanor at the hearing raise further concerns? Sen. Chris Van Hollen: Yes. What you saw from Brett Kavanaugh was a highly super-charged partisan statement, clearly indicating lack of appropriate temperament for the Supreme Court. And that was, of course, coupled with his conspiracy theories about how these charges of sexual assault were somehow a manufactured Democratic conspiracy, as if Democrats invented the awful experience that Dr. Ford had, as if Democrats concocted the idea that she talked to her therapist years ago, before Kavanaugh was ever up for a Supreme Court position. So both the tone and the partisan rhetoric indicated somebody who does not have a suitable temperament for the Supreme Court of the United States. MM: Is there a chance he would have to recuse himself from certain cases, based on some of the things he said at the hearing?   Van Hollen: His remarks were so partisan that it would mean he should recuse himself from controversial cases that are partisan nature, potentially.  As a practical matter, a Supreme Court justice has total discretion over when to recuse him- or herself, so this is a question of ‘should.’  How can the public have confidence in the impartiality of his decisions after his partisan performance before the Judiciary Committee?  He’s compromised himself and in doing so compromised the integrity of the Supreme Court process. Public faith in the court is already eroding, and this is going to make it much worse.  MM: I know you can’t pre-judge the FBI report, but can you talk at all about how it might impact the Senate’s timetable for voting?   Van Hollen: It’s hard to predict, because it depends entirely on when the FBI report is completed and what’s in it. I do have very real concerns that the process is not as comprehensive as it should be. They’re talking about wrapping it up [Wednesday], when we allotted a week for the investigation, and I think most observers thought a week was a very short timeline.  MM: Do you think Kavanaugh will be confirmed? Van Hollen: I don’t know. My view from looking at Judge Kavanaugh’s record is that he would swing the court far to the right. His views are way outside the judicial mainstream. But it really  comes down to the final decisions of a few senators. The reason we are having this investigation is that [Arizona Republican] Jeff Flake and a few other senators said that they didn’t want to proceed without gathering more information about Dr. Ford’s allegations.  MM: Chris Wallace [of Fox News] said that two of his daughters told him things he wasn’t aware of, because of the Kavanaugh-Ford hearings. A lot of people took note of that, given that he’s a main anchor on Fox. Can you talk about the cultural moment taking place now regarding issues of sexual assault? Van Hollen: Dr. Ford’s courage in coming forward has been very important in creating a conversation in the country which is way overdue.  Obviously it began recently with the #MeToo movement, but this has expanded that conversation in very important ways. I can tell you that I’ve received emails from constituents who are telling their stories of sexual assault for the very first time. I just spoke a few days ago to an 80-year-old woman who had been raped when she was 16 years old, on a military base in California. She had never told her story before. She felt it was important to come forward at this moment. It’s been a powerful moment for me and for others, because you’ve got others feeling empowered themselves. For me it’s been an important moment for the country where these conversations which had not taken place before are now happening, and information which had been hidden before is now coming to light. It’s an important teaching moment for all of us. MM: Did Senate Democrats hold the Ford letter until the end of the process, to cause exactly the sort of disruption we’re seeing now? Van Hollen: Not at all. All I know about that is what Sen. [Dianne] Feinstein (D-Calif.) has said. My information on that is the same information that you have.  MM: You’re head of the Democratic Senatorial Campaign Committee. You have Democrats running in Trump states now where Kavanaugh enjoys majority public support. I’m thinking primarily of North Dakota and West Virginia. Can these incumbents survive a no vote?  Van Hollen: These incumbents are going to do what they always do, which is collect all the information, listen to the testimony, gather the facts, and make a decision.  ========= MM: On another topic: What’s your reaction to the New York Times investigation into how the Trump family appears to have used fraudulent practices to avoid taxes? Van Hollen: The question is whether Donald Trump and his family were engaged in tax fraud. This is why he has been so determined to hide his tax returns. It makes it even more important that he make public his tax returns.   Republicans have significantly cut the IRS resources that are devoted to tracking down tax cheats. When tax cheats don’t pay their taxes, it means all the rest of us have to pay more in the long run.   I found [the Times story] to be well-documented and alarming that we have a president who appears to have engaged in fraudulent tax schemes.  I know their spokesperson is claiming that that some of these tax methods were approved by the IRS, but I haven’t seen any confirmation of that. Again, it explains why the president was so determined to hide his tax returns from the American people.  [email protected]