Another statewide poll, another solid lead for Gov. Lawrence J. Hogan Jr. (R) over his Democratic challenger, Benjamin T. Jealous. This poll, conducted Monday through Wednesday, found Hogan the choice of 52 percent and Jealous favored by 37 percent. Libertarian Shawn Quinn and Green Party nominee Ian Schlakman each got 1 percent, and 9 percent were undecided. The survey of 625 likely voters, taken by Mason-Dixon Polling & Strategy, had a 4-point margin of error. The timeframe of the poll overlapped with the only televised debate between Hogan and Jealous Monday evening. Whether that was a factor in the survey’s outcome is hard to tell. 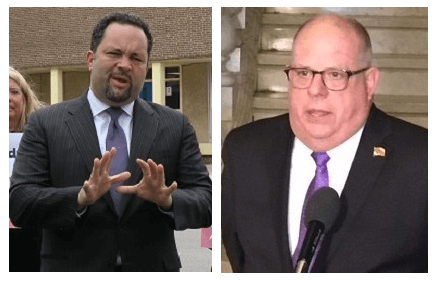 Benjamin T. Jealous (left) and Gov. Lawrence J. Hogan Jr.  The Mason-Dixon survey also shows a smaller gap between the candidates than the latest Goucher College poll, which was released last week and showed Hogan with a 22-point lead. But Mason-Dixon’s managing director, Brad Coker, suggested the more relevant comparison would be a poll his firm conducted in February, showing Hogan leading Jealous 50 percent to 33 percent. Still, the Jealous campaign was touting the movement. “While we do not know whether this poll reflects the full potential of our numbers in a Democratic surge election, even this data suggests that Ben Jealous is already closing the gap between him and Larry Hogan and we have barely spent any money on getting our message out to voters,” said Kevin Harris, a senior campaign adviser. “…Jealous’ vision is clearly resonating with the voters we need to win on November 6 and we are confident that we can continue to close the gap in the coming weeks and end up on top on Election Day.” Like all recent polls, the Mason-Dixon survey found Hogan broadly popular with key sectors of the electorate and in many regions of the state. “This poll shows what every poll has shown for nearly four years, that Governor Hogan has widespread bipartisan support throughout Maryland,” said Douglass V. Mayer, the governor’s deputy campaign manager. “This poll also shows that a majority of Marylanders remain strongly opposed to Ben Jealous’ unaffordable plans that will double the state budget and double their taxes.” Jealous, the former president of the NAACP, led in Baltimore City (62 percent to 26 percent), Prince George’s County (56 percent to 23 percent) and Montgomery County (49 percent to 41 percent), “but these margins are significantly smaller than most Democrats have achieved in recent state elections,” according to the polling memo. Jealous was supported by 70 percent of African-American voters compared to 17 percent who preferred Hogan. He led among Democrats 57 percent to 32 percent, “but Hogan is making considerable in-roads into his base,” the pollsters wrote. Hogan had huge margins among white voters (65 percent to 25 percent), Independent voters (58 percent to 26 percent) and Republicans (92 percent to 3 percent). “Hogan’s strength is largely a function of his personal popularity (64%) and his extremely high job performance rating. Statewide, 68% approve of Hogan’s job performance, while only 23% disapprove and 9% are unsure,” the pollsters wrote. Only 16 percent of voters viewed Hogan unfavorably, and 23 percent disapproved of his job performance. By comparison,  Jealous was viewed favorably by 35 percent of voters and unfavorably by 31 percent. Republicans have worked hard to build up Jealous’ unfavorable ratings over the summer, spending millions in TV ads that suggest he is untested and that his policy proposals are outside the political mainstream.