But there are at least a couple of districts where Democrats are on offense – particularly if a national blue wave washes over the state.

One of them is District 9, a half-rural, half-suburban district that takes in parts of Howard and Carroll counties. 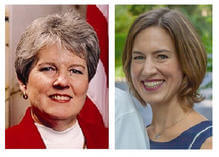 The seat has been held for the past four years by Sen. Gail H. Bates (R), who served in the House for 13 years before that.

Democrats are high on their candidate, Katie Fry Hester, an engineer who advises companies on corporate sustainability and international development.

Hester says she is confident of victory, even though President Trump carried the district by more than 7 points in 2016 and Hogan won it by 40 points four years ago.

“The energy I have seen from the people I meet has been tremendous, people are definitely energized,” said Hester, who ran unopposed in the primary, in an email to Maryland Matters. “I’m hearing is a lot of enthusiasm for my message, and people are telling me they’re more engaged than ever before.”

Hester wrote that she hopes to bring a “unique experience and a fresh perspective to Annapolis.”

She listed investing effectively in a strong public education system and alternative energy as some of her top priorities, along with affordable health care with an emphasis on preventive care and mental health care, improving infrastructure and helping small businesses and farmers.

Hester also has a plan for restoring historic Ellicott City, which has been devastated twice by historic flooding over the past two years. She has vowed to push for extra state funding and proposes working to develop public-private partnerships to create stormwater retention ponds and other flood mitigation techniques.

Hester said she agrees with Bates on revising the tax code.

“Our tax code needs to change because a lot of small businesses in Maryland say it just isn’t working,” Hester said. “We also need to provide additional support for retirees on a fixed income.”

Bates, a former teacher and a parent, said, “education issues are near and dear to my heart,” and she has expressed pride in the high rankings of Howard and Carroll County schools.

“I want to make sure that as we make decisions about spending we will be good stewards with the taxpayers’ money,” she continued. “If we’re going to say that we are doing something, then let’s make sure we do it.”

Bates currently serves on the Senate Education, Health and Environmental Affairs Committee. She got a perfect score from Maryland Business for Responsive Government for her 2018 voting record, and has a 96 percent lifetime score from the business group.

The National Federation of Independent Business gave her a perfect score for the current four-year legislative term. The Maryland League of Conservation Voters gave her a 44 percent for 2018; she has a 16 percent lifetime score from the green group.

Hester has been raising money aggressively, and reported $77,165 on hand in mid-August. Bates had $53,834 in her war chest at the time. Bates had a competitive primary against Reid J. Novotny, a military veteran who challenged the incumbent from the right. Bates won the race by 8 points.

Both candidates are criss-crossing the district and knocking on doors.

“We always run as if we’re 20 points behind because you just want to make sure everybody does get out and vote,” Bates said. “You can’t take anything for granted. …There’s never a certainty. Anything can happen.”

Republicans and conservatives have a full schedule of counter-programming to President Biden’s rally in Rockville.