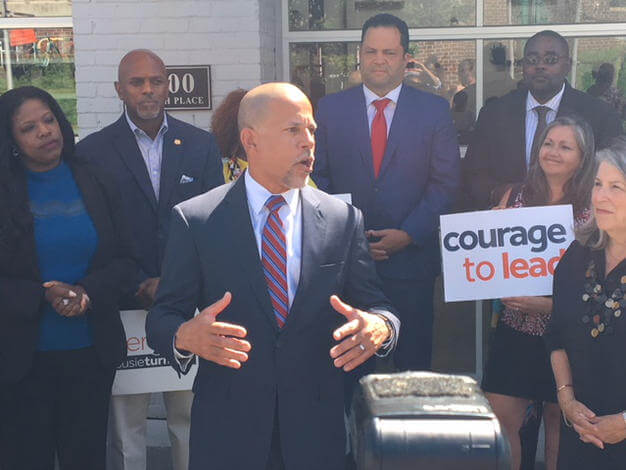 U.S. Rep. Anthony G. Brown (D) has accused Gov. Lawrence J. Hogan Jr. (R) of sending Maryland National Guard officers to the U.S.-Mexico border without being asked to do so by the Defense Department or a fellow governor. But a briefing paper that was provided to Brown’s office last spring contradicts his claim. During a conference call with reporters on Friday about immigration, Brown, the 2014 Democratic nominee for governor and a vocal backer of Hogan’s challenger, Benjamin T. Jealous (D), said: “We don’t need a governor, like Gov. Hogan, who is going to — without a request from the federal government or any state — send air crews to the Southwest border to participate in the separation of families. And that’s what Gov. Hogan did.”

“Then Gov. Hogan turned around and recalled that air crew and somehow declared victory, as if he was somehow taking on President Trump,” Brown continued. “That’s insufficient.”

Brown’s rhetoric on Hogan was largely lost in the broader discussion over Trump’s decision to condemn Jealous the night before.  But an unclassified “information paper” from the Maryland National Guard, sent to a member of Brown’s legislative staff on June 17, indicates that Guard personnel were being used “in support of SECDEF Directed Southwest Border Mission,” a reference to Secretary of Defense James N. Mattis. “The [Maryland National Guard] currently has 1 Lakota (Light Utility Helicopter) with two pilots and two crew chiefs on the southern border in support of and at the request of the New Mexico National Guard,” the briefing said. “The current support from MD National Guard is part of the overall Border support strategy being developed by National Guard Bureau.” The day after the status report on the use of Maryland National Guard personnel that went to Brown’s office, news broke of the federal government’s policy of separating thousands of children from their parents at the border – which sparked widespread condemnation. The Democratic gubernatorial primary was less than two weeks away, and several candidates — and at least one prominent Maryland religious leader — denounced the federal government’s policy. Within hours, Hogan called the personnel home.

“Immigration enforcement efforts should focus on criminals, not separating innocent children from their families,” the governor tweeted at the time. “Until this policy of separating children from their families has been rescinded, Maryland will not deploy any National Guard resources to the border,” he said. “Earlier this morning, I ordered our 4 crewmembers & helicopter to immediately return from where they were stationed in New Mexico.”

State officials have pointed out that the Maryland National Guard personnel deployed to New Mexico were used for their ability to scan the desert at night for border-crossers and were not involved in separating immigrant families. When news of the separations surfaced, Hogan denounced the lack of a coherent federal immigration policy. “Washington has failed again & again to deliver needed immigration reform –  Congress and the administration must step up and work together to fix our broken system,” he tweeted. “Immigration enforcement efforts should focus on criminals, not separating innocent children from their families.” Brown, Maryland’s lieutenant governor under Hogan’s predecessor, former Gov. Martin J. O’Malley (D), lost the 2014 gubernatorial election to Hogan in an upset. The congressman endorsed Jealous on Aug. 14 and has emerged in recent days as one of the former NAACP president’s most forceful surrogates. But Hogan aides expressed irritation that Brown – himself a military reservist who was deployed to Iraq in 2004 – would accuse the governor of sending personnel to the border uninvited.

“Rep. Brown made an inaccurate and untrue statement in that call, and he knows that,” said Amelia Chassé, a Hogan spokeswoman. Brown’s comments last week came the morning after President Trump, speaking at a rally in Montana, criticized Jealous for his proposal to allow students, including so-called “dreamers,” to attend community college free of charge.

On the call with other Democrats, Brown accused Hogan of being “a silent co-conspirator in the kind of destructive policies, the divisive policies, of President Trump,” talking at length about White House plans to drill for oil off the Atlantic seaboard, the Republican “tax scam,” GOP efforts to dismantle the Affordable Care Act, and more. “Trump and Hogan…may not be one and the same,” Brown said, “but they are part of the same mind-set that we don’t serve all the people but only some of the people, that government is not here to ensure equality of opportunity, but ought to be…minimized, reduced to nothing, so that we all would agree it’s ineffective.”

Hogan has broken with Trump on a range of issues. He made national headlines in late 2016 when he announced that he would write-in the name of his father, former U.S. Rep. Lawrence J. Hogan Sr. (R), rather than vote for either party’s nominee.

The congressman’s spokesman, Matthew Verghese, was asked to reconcile Brown’s accusation, that guard personnel and the helicopter were sent to the border uninvited, with the briefing paper that states they were sent to support a Pentagon border protection effort at the request of the New Mexico National Guard. He provided this statement: “After initially denying the Maryland National Guard had received ‘any request for assistance,’ Governor Hogan quietly deployed the MDNG to support President Trump’s executive order to send military troops on the Southern border. Following immense pressure from Democrats, the Governor decided to withdraw the Guard. That is not leadership.”

Chassé, the governor’s spokeswoman, said that national guard personnel were requested in late May, before the family separation policy was publicized. She said Hogan pulled guard personnel back as soon as the Trump administration’s actions became public. “The congressman owes members of the National Guard an explanation for why he would make a false statement,” she said.