Del. Antonio Hayes (D), part of a generation of rising Baltimore city leaders, plans to announce Saturday that he is running for the state Senate seat now held by Sen. Barbara Robinson (D).

Hayes will make his announcement on the 2500 block of Francis St. in the troubled Penn-North neighborhood — half a block from where he grew up. Hayes said the neighborhood is where he first became civically active, through an after-school leadership program.

“My career into elective office really started there as a teenager, in middle school,” he said.

Hayes said the community, plagued by poverty and drugs, symbolizes what’s wrong with the city — but also its promise.

“Just two years ago, CNN brought the world to our doorstep after the death of Freddie Gray,” he said. “It reminded me why I decided to take a leadership role. It’s 20-something years later, and I’m still fighting to make sure that this is a thriving community.”

Hayes, who is 39, was elected to represent the West Baltimore 40th District in 2014, but he has spent several years in politics and local government dating back to his graduation from college. Since 2010, he has been chief of staff at the city’s Department of Social Services. 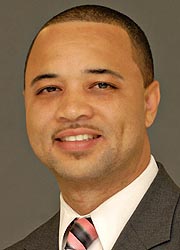 While not saying so publicly, Hayes will be making a generational appeal against Robinson, who is twice his age. He said he is offering voters “enthusiastic leadership.”

Robinson, a retired educator and court administrator, was elected to the House in 2006 and was appointed to the Senate in December, after the district’s previous senator, Catherine Pugh (D), was sworn in as mayor. Hayes did not get the appointment in part because he had endorsed former Mayor Sheila Dixon (D) — his former boss — over Pugh in the Democratic mayoral primary last year.

Robinson did not respond to a request for comment Friday, but an aide in her Baltimore district office said “she’s running” in 2018. Hayes said he considers himself competing for an open seat rather than challenging an incumbent, because “nobody’s actually been elected to the seat.”

Robinson had just $20,000 in her campaign account as of mid-January, while Hayes had $47,000. Hayes, who has retained the services of powerhouse Democratic fundraiser Colleen Martin-Lauer, had a fundraising event last month at the popular Mt. Vernon Marketplace.

Hayes is part of an emerging set of young African-American leaders in Baltimore city who have taken office in recent years. Friends and allies, the group includes Del. Cory McCray (D), who was elected in the same year as Hayes, and City Councilmembers John Bullock (D), Kristerfer Burnett (D), Brandon Scott (D) and Shannon Sneed (D). Scott is in his second term and the others are freshmen. All are younger than 40.

McCray is also contemplating a run against an older incumbent senator, Nathaniel McFadden (D), who was first elected in 1994. McCray, as Maryland Matters reported last month, recently conducted a poll showing him running competitively with McFadden, who is the Senate president pro tem.

Hayes said he has notified his District 40 colleagues about his intention to run and is reaching out to community groups, faith leaders, labor unions and voters, seeking their support.