For several hours Wednesday night, part of the Gaylord National Resort and Convention Center resembled a decorative ensemble of sharp-fitting suits, sparkling and colorful dresses and an array of smiling faces.

The glittering waterside resort at National Harbor was the venue for an inaugural gala hosted by Prince George’s County Executive Angela Alsobrooks (D). It sought to celebrate the past four years in the county, commend municipal, county and state leaders for working with her administration, and look to the future as she embarks on a second term.

Other county executives had parties after their inaugurations this week, but none was as packed or as fancy as Alsobrooks’ black-tie affair. Alsobrooks is considered a possible candidate for U.S. Senate in 2024 if three-term Sen. Ben Cardin retires. 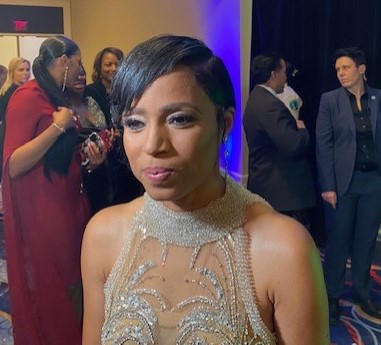 Lierman was the beneficiary of a strategically-timed endorsement from Alsobrooks in the Democratic primary this year, when she was battling Bowie Mayor Tim Adams.

Part of the event also sought to raise money for local charities.

Before the program began, Alsobrooks offered advice for Prince Georgians that could also resonate throughout the state.

“Never give up. Keep the faith. The best is still yet to come,” she said during an interview. “Our unity, working together, collaboration [and] looking out for your neighbors. Those are the things that have made us successful during some very challenging times over the last year. I’m convinced that still is going to see us through and…continuing to invest in our community.”

Brown wants to hear from the public

Speaking of Brown, the attorney general-elect has scheduled an online public forum to hear what Marylanders want him to prioritize when he takes office on Jan. 3.

The virtual public forum will take place on Monday at 7 p.m. Those interested in participating can pre-register here.

“As Maryland’s next Attorney General, I’ll be the peoples’ lawyer,” Brown said in a statement. “I’m committed to transparency and being responsive to Marylanders’ needs…As we prepare to take office, I want to hear from the public about their ideas and recommendations. This virtual public forum will provide constituents an opportunity to engage directly with my transition team and I look forward to this discussion.”

The Legislative Black Caucus of Maryland made it official this week, announcing that Del. Jheanelle Wilkins (D-Montgomery) will become the new caucus chair.

Early in the fall, the longtime chair, Del. Darryl Barnes (D-Prince George’s), announced he’d be stepping down from his leadership post. Wilkins had been first vice chair, so she automatically moved up when Barnes’ resignation became effective this Monday.

Wilkins, 34, has been in the legislature for the past six years. She serves as House Parliamentarian and has played a key role in expanding voting rights in the state as chair of the Election Law Subcommittee — including leading mail-in ballot expansion and legislation to increase early voting sites.

Wilkins has played several lead roles in the black caucus, including as 1st vice chair and parliamentarian. She also led the caucus’s 2020 census and redistricting efforts. In her day job, she’s director of State and Local Government Affairs at The Leadership Conference on Civil and Human Rights.

“With new and historic leadership across the state and at every level, the opportunity to make a distinguishable impact on our state and transform the lives of Black Marylanders has never been greater,” Wilkins said. “I’m honored to lead the Legislative Black Caucus of Maryland as we work together to move our state forward.”

The LBC said the full executive committee leadership team will be voted in by the membership in early January 2023.

The new hire is Grason Wiggins, who most recently served as senior manager of Government Affairs for the Maryland Multi-Housing Association. After graduating from the University of Baltimore School of Law, Wiggins began his career as an analyst at the Maryland Department of Labor, and advanced to become the agency’s director of Legislative and Regulatory Affairs.

Since coming aboard a year ago, Skvirsky has conducted interviews with several high-ranking Maryland public officials and advocates for the firm’s “Conversation with HJM” video series. She has also monitored legislative hearings, coordinated meetings with elected officials, and generated a daily email called “Headlines from HJM,” designed to keep HJM’s clients in the know.

Prior to joining HJM, Skvirsky completed a public policy degree at the University of Maryland, College Park, and served as a policy intern at the United States Department of Defense. She also worked as a campaign intern at the Maryland Public Interest Research Group.

MedChi, The Maryland State Medical Society, has hired Ashton DeLong as general counsel. Prior to joining MedChi, DeLong spent over three years working on behalf of Maryland doctors as an associate attorney at Medical Mutual Liability Insurance Society of Maryland. She also served as senior law clerk to former Chief Judge Patrick Woodward at the Court of Special Appeals of Maryland and as law clerk to the late Judge Thomas Simpson Jr. at the Circuit Court for Charles County.

DeLong received her Juris Doctor degree in 2015 from George Mason University School of Law and her undergraduate degree from Marymount University.