The attorney representing Baltimore State’s Attorney Marilyn Mosby argued in federal court on Thursday that high-profile fraud charges against her flow directly from the lead prosecutor’s personal, race-tinged animosity against her.

As a result, defense attorney A. Scott Bolden told a judge, charges against Mosby must be dismissed — or, at a minimum, the court must force the U.S. Department of Justice to remove Assistant U.S. Attorney Leo Wise from the case.

U.S. District Judge Lydia Kay Griggsby rejected Mosby’s requests. She said the defendant has failed to meet the legal standard for outright dismissal of the charges or to have a prosecuting attorney disqualified.

Griggsby’s ruling sets the stage for Mosby (D), Baltimore’s top prosecutor, to go on trial in September, just two months before voters decide whether to re-elect her to a 3rd term.

Mosby faces two counts of perjury for two separate withdrawals from her retirement account citing coronavirus-related hardships and two counts of making a false statement on a mortgage loan application.

Despite the setback, Mosby reasserted her innocence, telling reporters outside the federal courthouse, “I’m going to fight and I’m going to prevail, like I always do.”

“This fight continues,” Bolden told reporters. “This is one step in the ongoing fight and the struggle for her freedom and her liberty and for her success — politically, personally and family-wise.”

Mosby’s claims of “animus” and “selective and vindictive prosecution” were debated during a hearing that ran over two hours.

Bolden argued that Wise has a “penchant” for prosecuting Black politicians and that he displayed animosity toward Mosby when he contributed $200 to her political opponents in 2018. He also alleged that Wise was belligerent in a meeting and that prosecutors failed to present potentially exculpatory evidence to a grand jury.

“We think these are powerful facts,” said Bolden, a Washington, D.C. attorney who once chaired the D.C. Democratic Party. “We think you gotta do something about this. This is not a clean indictment.” 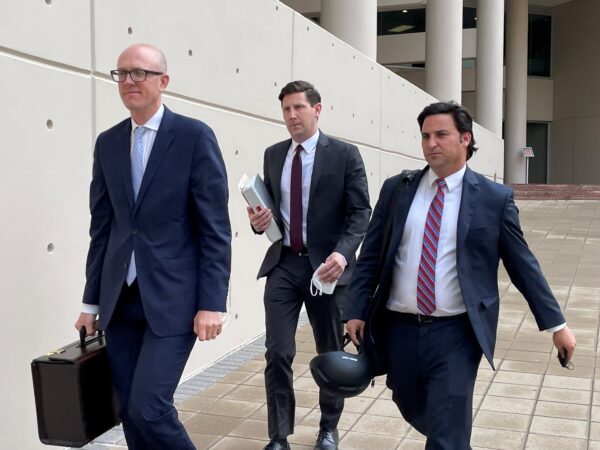 Wise accused Bolden and Mosby of concocting “a victim fantasy… to deflect from the defendant’s conduct.” He called their allegations “a jumble of baseless and poorly reasoned personal attacks… divorced from the law on selective and vindictive prosecutions.”

“This is a play that politicians do,” he added.

Wise was lead prosecutor in the public corruption case against former Baltimore Mayor Catherine Pugh (D), and he said Mosby’s allegations echo Pugh’s. “The mayor said it was a witch hunt — until she pled guilty,” he said.

Wise said public corruption prosecutions go through a rigorous process and must be approved by an internal “indictment review committee.” He dismissed the notion that he is influential in pushing cases forward.

“I could no more decide whether to indict someone than I could authorize air strikes into Russia,” he said.

In issuing her ruling, the judge said most of the issues raised by Mosby “amount to objections or differences of opinions” about how the prosecution has pursued its case against her.

Griggsby also said that the government has “broad discretions” in determining what evidence to share with the defense before a trial, and that Wise’s 2018 contributions to Mosby’s campaign opponents did not support claims that the government was targeting Mosby unfairly.

The judge appeared skeptical of Mosby’s arguments, pressing Bolden to provide most solid evidence. He spoke over her repeatedly. “Mr. Bolden, please don’t interrupt the court,” the judge said at one point.

Bolden called the judge’s ruling “disappointing but not surprising.”

The Mosby case has attracted significant media attention. Although she failed to get the charges dismissed or Wise removed, the public airing of her grievances could impact future jurors in a manner that benefits her at trial.

At 12:28pm, about 90 minutes before the hearing began, Mosby took to social media to declare that she had officially filed for re-election. The filing deadline is Friday.

She released a 30-second video showing her going to the Baltimore City Board of Elections to fill out the paperwork with her husband, City Council President Nick Mosby (D), by her side.

“Game on,” Marilyn Mosby tells the camera after explaining that she’d filed. The video then cuts to footage from her re-election launch video, which was taken offline within hours of its release on Tuesday because of a copyright claim over the use of the song “Jesus Walks” as the backing track.