When the Great Recession hit and revenues tanked, state leaders raided every pot of money they could find, including the fund that divides “highway user revenues” between the State Highway Administration and local governments.

Given Maryland’s record surplus, county and municipal officials are insisting that Maryland restore the 70-30 split that existed for 40 years before the downturn. Despite a full-throated campaign, however, their efforts have yet to pay off.

A House measure intended to restore the old formula attracted support from an unusual bipartisan array of rural, suburban and urban leaders — and it is a top priority for the Maryland Association of Counties and the Maryland Municipal League. 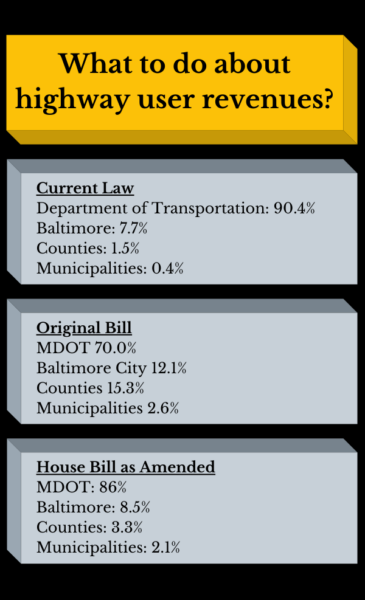 As originally drafted, the Maryland Department of Transportation would keep 70 cents of every dollar that enters the fund, which consists mostly gas tax revenues, vehicle registration fees, car rentals, and the state corporate income tax. Baltimore City would get 12%, the counties would split 15%, and municipalities would divvy up 3%.

The measure passed the House unanimously last week, but not before being amended to dramatically reduce the localities’ share of the pie. Under the revisions, local governments would see just modest increases in the split that has been in use for the last dozen years, a division in which MDOT keeps 90% of highway-user revenues, Baltimore gets 8%, and the other localities have to make do with less than 2%.

The Maryland Association of Counties and many members of the House are pinning their hopes on the Senate.

“Where we sit today, we’re awfully far behind of full funding, and it’s been a decade of a starvation diet for our local roads and bridges,” said MACo executive director Michael Sanderson. “We definitely feel like this year is the best opportunity we’ve seen to right that ship.”

Budget analysts revised upward their estimate of the state’s revenue picture earlier this month. Maryland is on track for a two-year surplus of $7.5 billion.

Del. Carl Anderton Jr. (R-Lower Shore), the sponsor of the MACo-backed bill, was philosophical about the changes that occurred in committee, saying, “those things happen in negotiation.”

“We have a lot of unfinished business when it comes to the counties and we’re hopeful that when the bill makes it over to the Senate, we’ll see what they come up with,” he added.

Anderton’s bill is the rare Republican measure to make it out of the House. It attracted dozens of sponsors from across the political spectrum. “This is something that effects everybody,” the former mayor of Delmar said. “It’s a non-partisan issue. It’s do you want safe, clean streets or not.”

The Senate version of Anderton’s bill is sponsored by Sen. Cory McCray (D-Baltimore) and has attracted more than two dozen co-sponsors from both parties. It has yet to be voted upon.

“We’re going to do a highway user bill,” said Budget & Taxation Committee chair Guy Guzzone (D-Howard). “We’re clearly going to make things better, but to what degree (is unknown). We’re still in a grand negotiation with the governor and the House on a number of tax issues.”