Talbot County Council members voted to move a Confederate statue from the county courthouse lawn in Easton at their Tuesday night meeting.

The pressures of a lawsuit that contends the statue’s placement on the courthouse lawn violates the U.S. Constitution and is racist, calls from statewide elected officials for the statue to be removed and protests all preceded a resolution to move the monument.

Under the resolution, introduced by Councilmember Frank Divilio (R) on Monday, the monument will be moved to the Cross Keys Battlefield in Harrisonburg, Va. and placed under control of the Shenandoah Valley Battlefields Foundation.

Known as the Talbot Boys monument, it includes the names of Talbot County residents who fought for the Confederacy in the Civil War, and features a soldier holding a Confederate battle flag.

Civil rights advocates have been pushing for the Jim Crow-era statue’s removal from courthouse grounds for years, but previous proposals to move the monument were voted down by the county council. 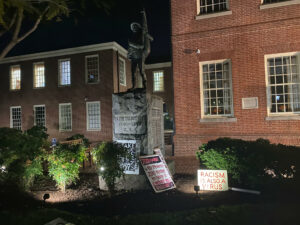 As to why he decided to support removing the monument, Divilio said he felt the county “can no longer afford to delay a resolution.” Divilio said the county council needs to focus on issues like broadband expansion and the COVID-19 pandemic.

“The Talbot Boys issue has divided our community for too long, and has sidelined many other important things that the county council and county government needs to address,” Divilio said. “County services have suffered because of this debate and the toll that it has taken on county residents, businesses and county staff.”

Pack noted that he also had a change of heart about the monument: He voted to keep it in 2015 after the local NAACP campaigned to remove it. After the murder of George Floyd in 2020 led to a renewed nationwide conversation about whether Confederate monuments should remain on public property, however, Pack pushed to move the Talbot Boys monument.

“We may not know individually why those men went off to fight … what we do know is the overarching umbrella that the Confederacy stood for, and that was most notably the enslavement of Black people,” Pack said.

Richard Potter, the president of the Talbot County NAACP and a plaintiff in the lawsuit seeking to remove the statue, said he thinks the combination of the lawsuit and calls from both political figures and advocates led to Divilio’s resolution. Potter said he was “elated” by the council’s vote, but said there is still more work to be done to make Talbot County inclusive and equitable.

Councilmember Laura E. Price (R) had planned a resolution to add a Union soldier to the existing monument, but she pushed that proposal back because she said the public should have an opportunity to comment.

Callahan and Price both said the public should have an opportunity to comment on the statue’s new location.

“I think there’s a lot of people who would be supportive of moving the monument that don’t want it to go to Virginia,” Price said. “I do have a problem with that … I would much rather have a compromise.”

Callahan called the resolution a “mistake.” He asked Divilio whether he would be open to holding a public hearing on the monument’s location, and Divilio declined.

Pack said the council could have been gathering public input since they voted against removing the statue last year.

Divilio said that, after more than a year of protests and public debate, he feels that the county council is “well-versed” as to how the public feels about the statue.

Some members of the public who spoke at the meeting raised questions about whether the Shenandoah Valley Battlefields Foundation would accept the monument, pointing to a letter from the foundation that said “the preferred and optimal long-term treatment of monuments is for them to remain where originally placed and cared for in perpetuity.”

In that letter, the foundation stated that “if and when it is evident that the monument will not and can not safely remain” in the county, they are committed to becoming its “permanent steward.”

Divilio said in a Wednesday email that the letter “explains that they are not in the business of collecting or requesting these, and will be accepting it now that all local options have been exhausted.”

Editor’s Note: This story was updated Wednesday to include additional information from the Shenandoah Valley Battlefields Foundation.

U.S. Sen. Benjamin L. Cardin (D-Md.) wants to see the Red Line become a reality, he said at a town hall during the Maryland…

A Confederate monument on the Talbot County courthouse lawn in Easton is racist and unconstitutional, said civil rights groups who filed a federal lawsuit…