U.S. Sen. Chris Van Hollen (D) told local officials at the Maryland Association of Counties summer conference that they were best-suited to spend the billions of dollars in federal stimulus funding that has been approved in Congress since the start of the COVID-19 pandemic.

“You’re the ones on the front line having to respond,” Van Hollen said.

It was the “right decision” to allocate funding directly to counties for individualized pandemic recovery programs, Maryland’s junior senator said.

The crowd broke into one round of bipartisan applause, when Van Hollen address the importance of broadband internet access. Maryland should receive at least $300 million for broadband expansion through the federal government, Van Hollen said.

“This is an issue that impacts all of our constituents, every Marylander,” Van Hollen said. “And it is my view that broadband is to the 21st century what electricity was the 20th century: It’s a necessity. Every household should be connected to affordable broadband.”

Federally, Van Hollen said Democrats in Congress are now focused on the “better” part of President Biden’s “Build Back Better” agenda, including a $1.2 trillion infrastructure deal and a more expansive $3.5 trillion budget plan that includes an expansion of what the Biden administration has called “human infrastructure.” That plan includes an expansion of community colleges, provisions to lower prescription drug costs, and making affordable child care more widely available — things that Van Hollen said he hoped could attract widespread support.

“I hope this will become more of a bipartisan effort as time goes on,” Van Hollen said. “We’ll see. We all recognize that we can have different perspectives and points of view and we’re still all in this together.”

Van Hollen also touched on the need for continued economic recovery and encouraged attendees to get and encourage COVID-19 vaccines.

“The reality is that, as of today, everybody in Maryland, who is dying from COVID-19 is somebody who’s unvaccinated,” he added.

Later in the day, Van Hollen and a crowd of other elected officials including Ocean City Mayor Rick Meehan to announce funding for the next round of Ocean City beach renourishment, $15 million that the Army Corps of Engineers will use to improve more than 8 miles of shoreline.

“It’s a really important example of federal local partnership. That beach restoration project is what helps shelter this area from some of the biggest storms,” Van Hollen said. “…And of course, what would Ocean City be without the beach?” 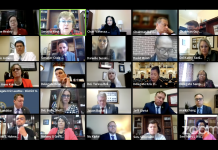