As Baltimore County Executive John A. “Johnny O” Olszewski Jr. (D) contemplates whether to run for governor in 2022, a quiet but vigorous campaign to replace him in Towson is already underway.

Two Democratic members of the Baltimore County Council — Julian E. Jones Jr., the current chairman, and Israel C. “Izzy” Patoka — are gearing up to run for county executive if Olszewski makes a statewide bid. Both Patoka and Jones are making fundraising calls and reaching out to party activists about a possible campaign, and in interviews both said they would seriously consider trying to replace Olszewski.

Jones and Patoka may not be the only Democratic candidates. Former state Sen. James Brochin, who finished just 17 votes behind Olszewski in the 2018 Democratic primary, said Thursday he is not ruling out a second bid.

And it’s possible that an open seat could draw a top Republican into the race, like County Councilmember David S. Marks. But even in a favorable year nationally for Republicans, the GOP nominee would be a heavy underdog.

For now, though, all eyes are on Olszewski, the 38-year-old first term executive who has brought a reform agenda to county government. Olszewski has a fundraiser scheduled for April 6 — sparking speculation that he could make a political announcement then. In an email to supporters, the event has been billed as “an evening you won’t want to miss.”

But there’s also speculation Olszewski might prefer to wait to reveal his plans until after the county council completes its deliberations over his proposed county budget in May.

“The question is, does Johnny have the guts to run for governor?” Brochin said.

If Olszewski decides to leave the county executive job, both Jones and Patoka said they intend to build on his record.

“Should Johnny run for governor, I don’t want all the progress we’ve made since he’s been county executive to fall apart,” Patoka said.

Jones and Patoka would have different messages and bring different strengths to the race. 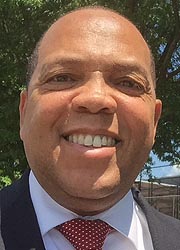 Jones, who is completing his second term on the council, representing Woodlawn, Randallstown and other communities, would be seeking to make history by becoming the first Black Baltimore County executive. That argument could hold plenty of sway in a Democratic primary.

In a race with Patoka, Jones would also certainly be the favorite of the Baltimore area’s formidable and generous real estate developers. Jones conceded that his opponents will attack him for being too close to developers.

“Somebody’s always going to criticize something,” he said. “I believe in smart growth. I believe in working closely with developers to bring things that are important to the community.”

More than anything, Jones, who spent 32 years with the Anne Arundel County Fire Department, retiring as a division chief, said he would present himself as the most seasoned candidate and as a steady hand and proven leader.

“Bottom line is, I’ve led on quite a few issues in the county,” he said. “People know where I stand and the issues where I led. They know I’m a straight shooter and my message is simply I feel I’d be the most qualified person for the job.”

“That kind of stuff drives me — to make sure government doesn’t run roughshod over people,” Jones said.

Jones was elected in 2014 by ousting incumbent Councilmember Kenneth N. Oliver by almost 12 points in the Democratic primary — after losing to Oliver by 98 votes four years earlier. 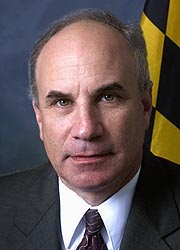 Patoka, who is in his first term, would try to present himself as a progressive and reformer in the Olszewski vein. Patoka has run a vigorous grass-roots fundraising operation and reported $422,817 in the bank as of mid-January after raising $223,124 over the previous year (Jones had $242,631 on hand after raising $126,432 during the same period). He had far more money on hand and far more donors than any of the six other members of the county council.

“It surpassed all of my expectations,” Patoka said. “It’s an affirmation of the work we’ve been doing. We focus on the nuts and bolts of governing — basic county services that were not always getting the attention over the past couple of decades in Baltimore County.”

Patoka, whose district includes includes Pikesville, Owings Mills, Reisterstown, Glyndon, Lutherville and Ruxton, is a former executive with LifeBridge Health, the nonprofit medical care provider in the Baltimore area, and worked for former Gov. Martin J. O’Malley (D), as executive director of the Governor’s Office of Community Initiatives and as the director of the Governor’s Intergovernmental Affairs Office.

The O’Malley connection has helped Patoka build his political network and his fundraising operation. He would also be the favorite for many environmental groups and community organizations.

Patoka, who won an open-seat primary in 2018 over a candidate favored by real estate interests, said he would tout his work on environmental protection, fair housing and police reform. He said he and his staff have been busy working with seven different food banks across the county since the pandemic hit.

“I’m proud to be a progressive,” he said.

Patoka and Jones represent the council districts with the biggest Democratic turnout in the past several elections, leaving little room in a countywide race for a potential contender from the East County, where there are a diminishing number of Democratic officeholders and where Democrats are less active in party primaries than they once were. Olszewski is from Dundalk, in the East County, but he was able to put together a coalition of local voters and progressives from throughout the country in the three-way Democratic primary.

Brochin, a conservative anti-machine Democrat who served in the state Senate for 16 years before losing narrowly to Olszewski in the 2018 Democratic primary, could be a wild card in 2022.

While he would not rule out a second run for county executive, Brochin said he is unsure whether he will try a political comeback of any kind. But if he does, he might be more inclined to run for the 1st District congressional seat, where a handful of Democrats, including former state delegate and gubernatorial contender Heather R. Mizeur are already lining up to challenge Rep. Andrew P. Harris (R).

Brochin said he is driven by disgust for Harris — the congressman’s unwillingness to acknowledge the legitimacy of the 2020 presidential election results, and his apologies for the insurrectionists who stormed the U.S. Capitol earlier this year.

“Jan. 6 really shook me to the core,” Brochin said.

Brochin said he is mindful that Mizeur, a full-throated progressive, would be tough to beat in the Democratic primary. But he also expressed skepticism that she could prevail against Harris in the general election.

As he eyes a possible congressional bid, Brochin said he might be content if a more traditional Republican conservative, like Harford County Executive Barry Glassman or state Sen. J.B. Jennings, chooses to mount an aggressive primary campaign against Harris. As for his calculus in the county executive race, assuming Olszewski runs for governor, Brochin said he is aware that he could split the reform vote with Patoka in a Democratic primary.

“I really want Andy Harris to go down,” he said. “And I really don’t want Julian Jones and the developers to run Baltimore County.”

Although he has not raised significant money since losing to Olszewski in June 2018, Brochin still reported $60,915 in his campaign war chest as of mid-January.

The GOP picture: Outside chance or pipe dream?

Republicans have run competitive races for Baltimore County executive in the past, but under any circumstance it’s an uphill battle — even in favorable years nationally for Republicans. Only one Republican, Roger B. Hayden, has served as county executive since Spiro T. Agnew was elected governor in 1966. He served a single term, from 1990 to 1994. 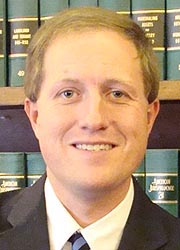 Some Republican activists have suggested that Marks, a political moderate who has served on the council since 2010, could run a strong race for county executive in 2022 if Olszewski moves on. In an interview, Marks said he was considering several political options next year, including seeking re-election, running for state Senate in District 8 if longtime incumbent Sen. Katherine A. Klausmeier (D) steps aside, or retiring.

“I’m undecided about what I’m going to do,” Marks said. “But I’m not inclined to run for county executive.”