The Montgomery County Board of Education this week voted to approve a $168.7 million contract to lease hundreds of electric school buses over the next 16 years.

It is reportedly the largest local government bus order in U.S. history.

Like school systems everywhere, Montgomery has long wanted to transition from diesel-powered buses to plug-ins. Trucks and buses represent a small percentage of vehicles but are a disproportionate source of emissions.

Until now, the cost of electric buses has been an obstacle. Electric buses have previously cost two or three times as much as traditionally-powered vehicles, school board members were told on Tuesday.

Acquiring them has traditionally required grants to make up the difference in price, and they are not considered a reliable source of ongoing funding.

Montgomery was able to structure a deal that made the new lease “budget neutral,” transportation director Todd Watkins told board members.

Under the contract, Montgomery will lease 326 electric Thomas Built buses over the next several years.

Montgomery has 1,422 buses in its current fleet, and they rack up 20 million miles per year, consuming 17,000 gallons of diesel fuel per day, officials said.

As electric buses arrive, the oldest diesel vehicles will be retired. Officials expect each new electric bus to last 12 years.

Monique Hanis, a spokeswoman for Advanced Energy Economy, a business association that promotes clean energy use, told Bloomberg that Montgomery’s deal represents the largest municipal government order of any kind for buses.

Watkins called the agreement “a first-of-its kind model that is budget neutral, and from the school system’s perspective, is not grant-dependent.”

“This is a very sustainable model that we believe we can use to electrify our entire fleet in a much more rapid way than we ever thought before,” he added.

Bethesda Beat reported that Montgomery County will install equipment to charge the buses at night, when power costs are low, in exchange for being able to re-sell unused power from the bus batteries back to the grid when it is more valuable.

The lease agreement includes the installation of charging equipment, the equipment itself and electricity costs. In addition, the county will be reimbursed for training its maintenance staff to work on electric buses, Watkins said.

The new vehicles will look identical to traditional models, he added, except they will lack a tailpipe, as the buses themselves produce no emissions.

Thomas Built Buses is a division of Daimler AG. The vehicles run on electric battery technology that was pioneered by Proterra Inc. Highland Electric Transportation coordinated the contract through a wholly-owned subsidiary, HET MCPS, LLC.

The two had been introduced by Del. David Fraser-Hidalgo (D-Montgomery), a longtime proponent of electric buses.

In talking with McIntyre, Elrich became convinced that tax credits and depreciation allowances were starting to shift the economics surrounding electric buses in a significant way.

Now that the school system has signed its deal, Elrich is thinking about the next steps in the county’s transition away from fossil fuels, including government vehicles, Ride-On buses and even, potentially, police cars, using Ford’s new high-performance Mustang Mach-E.

“We’re going to give it a run,” Elrich said. “We would do the same thing as they’re doing with the buses.”

“My goal is to flip our entire fleet to electric as quickly as we can do it.” 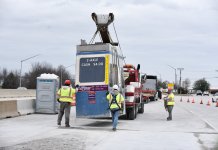