As Kamala D. Harris was sworn in as vice president at the Capitol on Wednesday, Maryland Democratic Party Chair Yvette Lewis – seated just feet away with members of the state’s Congressional delegation – was overcome with emotion.

“As soon as she took the oath of office, I cried,” Lewis told Maryland Matters.

The moment was a historic one: Harris is the first woman, and the first woman of color, to become vice president in United States history. Lewis said that, as Harris took the oath of office, she reflected on the journey that led the new vice president to one of the most powerful offices in the country. 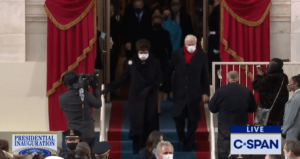 Lewis, who attended the inauguration with House Majority Leader Steny H. Hoyer (D-Md.), shares a part of Harris’ journey. Both Lewis and Harris attended Howard University, where they were members of the Alpha Kappa Alpha sorority.

Before the inauguration, Lewis caught Harris’ attention by shouting out “Howard University AKA!” to which Harris replied “Hello soror!”

And after the ceremony, the newly sworn-in vice president blew a kiss to the Maryland Democratic Party Chair. Lewis mouthed “I cried” to Harris, who in return made a gesture of hugging herself and nodding her head as a thank-you.

Wednesday’s inauguration was unusual, with heavy security and social-distancing measures in place. Members of Congress were seated in socially distanced chairs; a massive force of National Guard members and huge metal barricades were present, following the Jan. 6 attack on the Capitol; and a display of flags stretched to the Washington Monument representing the more than 400,000 Americans who have died of COVID-19 and could not be there in person.

As a precaution against additional insurrection, more than 25,000 National Guard members are stationed around the Capitol and throughout D.C., a number that grew dramatically following the Jan. 6 attack on the U.S. Capitol by a violent mob of pro-Trump supporters.

Even after that horrifying event, Biden and his transition team said they felt secure in continuing to hold the swearing-in ceremony outside on the West Front of the Capitol, its traditional location.

But despite the turbulent weeks before the inauguration, Lewis said there was “absolute joy” at the ceremony. She said she felt the new administration was focused on the future rather than dwelling on the past. President Joseph R. Biden pledged to work on behalf of all Americans, not just those who supported him, during the scaled-back and socially distanced ceremony.

“Nobody even mentioned anything about the outgoing administration,” she said. “It was all about learning and looking to the future, and that was what was so exciting to me.”

President Donald Trump and his wife, Melania, left the White House hours ahead of Biden’s swearing-in ceremony, with Marine One flying past the Capitol as it ferried him to his flight home to Florida.

Members of Maryland’s Congressional delegation, and Gov. Lawrence J. Hogan Jr. (R) also attended the ceremony. Biden’s message of unity seemed to resonate with those officials, who pledged to work with the new administration to overcome the COVID-19 pandemic.

“Our nation faces unprecedented challenges,” Hogan said in a statement. “We must defeat this pandemic, restore economic prosperity, and show Americans that we can deliver solutions to the serious problems that face us. We can only do that if we turn the page on the hate and dysfunction that infects our politics and deliver real, bipartisan action.”

Rep. Jamie B. Raskin (D) said he looks forward to working with Biden and Harris to “see America through this deadly pandemic and to get back on the road to progress and well-being for all.”

Congratulations to President Joe Biden and Vice President Kamala Harris on this extraordinary moment of such great promise. I look forward to working closely with you to see America through this deadly pandemic and to get back on the road to progress and well-being for all.

And Maryland Sen. Benjamin L. Cardin (D) who is poised to become the chair of the Small Business and Entrepreneurship Committee, hailed the peaceful transition of power in a Tweet.

Today’s #Inauguration represents a peaceful transition of power, the cornerstone of our democracy. I’m proud to watch as @JoeBiden & @KamalaHarris are sworn in as President & Vice President of the US today.

I brought a piece of @TowsonU with me to this historic celebration! pic.twitter.com/XpV34NoDIx

Hoyer, along with Lewis, presented Biden and Harris with a photograph of their inauguration during a gift-giving ceremony on Wednesday. During the ceremony, Hoyer referred to Biden as “Mr. President.” Biden’s response was inaudible on video, but prompted Hoyer to say “No, Joe. You’re Mr. President.”

Biden called on Americans to “end this uncivil war that pits red against blue, rural versus urban, conservative versus liberal,” during the ceremony.

After the ceremonies came to a close, Biden issued orders requiring mask-wearing on federal property, extending pandemic-spurred protections against evictions and foreclosures, and putting a pause on student loan interest and payments.

Biden also will begin to undo Trump’s immigration actions, reversing his ban on travel from some Muslim-majority countries; halting construction of the border wall; bolstering the Deferred Action for Childhood Arrivals program; and ending the enhanced immigration enforcement under the Trump administration.

Lewis, energized by the inauguration, plans to build on the new administration’s momentum. She cited Democratic successes in last year’s election, including flipping several county delegations from red to blue, as the start of a fight to elect a Democratic governor in 2022.

“People like to win,” Lewis said. “And people want to continue to win. And what we’re going to do is put together a winning formula here in Maryland, so people will want to work to continue to deliver victory for us.”

Another priority for Lewis is expanding on the Democratic majority in the Maryland House and Senate – and ousting U.S. Rep. Andrew P. Harris (R).

Lewis called Maryland’s Congressional delegation one of the “strongest, just about, in our nation,” many of whom already have a working relationship with Biden.

“The President knows that he has partners here in Maryland that he can rely on to help advance his agenda,” Lewis said.

Lewis acknowledged a “symmetry” in her and Harris’ experience, since they both graduated from Howard University. Now, Lewis said she hopes to put more people like Harris in public office as she continues to helm the Maryland Democratic Party.

“I think both of us had had a determination that we wanted to do something more,” Lewis said. “It has led her to far higher heights than she probably could have imagined. And for me, I think that it led me to a place where I can be of service to put someone like her in office.”

States Newsroom reporters Laura Olson and Ariana Figueroa contributed to this report. This story was updated to clarify that Harris is the first woman of color, not the first person of color, to serve as vice president.