When Prince George’s County Planning Board Chairwoman Elizabeth M. Hewlett was beginning her career in the late 1970s, she was almost always the only African-American woman in the room.

Black female lawyers like her were rare in those days. And there were no Black female judges in the county.

Today — in what surely is an extraordinary first for the nation — virtually every position of power in Prince George’s is held by a woman of color:

“It is amazing. And it’s a far cry from the way things were when I first moved to the county 41 years ago,” said Hewlett. “Things have changed tremendously in the County Administration Building and the courthouse.”

“To see all these women in positions is a beautiful thing,” she added. 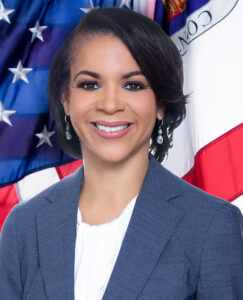 Alsobrooks announced last week that she was nominating Jackson, who had been one of the county’s deputy CAOs and had been a top aide to Alsobrooks when Alsobrooks was state’s attorney, to become CAO. She’ll replace Major F. Riddick, a veteran government tactician who has been CAO since Alsobrooks took office two years ago. He stepped down at the end of last week.

Prince George’s Chamber of Commerce President David Harrington has seen the rise of women in power during his career, which took him from Bladensburg City Hall to the County Council to the State House.

“Women have really taken over the county,” he said. “They are the power of the county.”

Prince George’s started to become a nationally-recognized mecca for African-American professionals during the 1980s, when many were drawn to the county from the neighboring District of Columbia, Montgomery County and elsewhere.

From that perspective, Harrington said, it is no an accident that Prince George’s is now a place where powerful women of color are everywhere.

“These were two-working-parent households,” he said. “You didn’t have women stay at home when we had this migration. Many of them were attorneys or federal contractors or bankers or what have you. And they began to organize and build a network.”

“And what you’re seeing now is the realization of that network, where they’re seizing power,” he added.

Harrington said Black sororities and other organizations that provide support and networking opportunities have contributed to the success that Alsobrooks, Braveboy and others have attained.

“Those are all very powerful associations that you can tap into for money, for other kinds of resources,” he said. “It becomes a very instant network that you have. … This was bound to happen.”

The success of Black women isn’t limited to Prince George’s, of course.

The speaker of the Maryland House of Delegates and the head of the Maryland Democratic Party are also African-American and female. The mayor of Baltimore City was as well, until last year.

The realization that Prince George’s is home to so many powerful women of color has increased since Sen. Kamala D. Harris (D-Calif.) became vice president-elect. She will make history when she is sworn in in January.

Hewlett has served as a mentor to — and backer of — many of the women of Alsobrooks’ generation.

She stressed that the black women who’ve achieved success in politics, education and the legal world made it on their energy and intellect. In other words, they were not diversity hires.

“They’re very competent, accomplished, hard-working, dedicated women who really care about this county,” she said. “None of this stuff came easy. We had to champion some folks for some of these positions.”

“None of this was happenstance. I’m here to tell you that,” she added. “Some of us have some battle scars.”

Hewlett said the success of earlier generations of Black women — like Hilda Pemberton, the first female president of the County Council, and Dorothy F. Bailey, with whom she  now serves on the Planning Board — helped create this moment.

Theresa Mitchell Dudley, the head of the Prince George’s County Education Association, has occasionally clashed with local leaders. Still, she recognizes the history that Prince George’s is making.

A longtime civic activist who has advocated for reform of the education and law enforcement systems and an end to domestic violence, Dudley stressed said that electing “people who look like me” is not victory in-and-of itself.

“There’s an old saying: All skin-folk ain’t kinfolk,” she said. “And while we have risen to a level of prominence, there are still issues that have to be resolved.”

That said, she too recognizes the power of having women of color serving as inspiration for the next generation.

“It’s important to have women in these roles so that other girls can say, ‘hey, you know what, I can do that. I can be Kamala Harris. I can be Angela Alsobrooks. I can do those things,” Dudley added.

She said she drew inspiration from two of the first Black women to serve in the U.S. House of Representatives.

“When I was a little girl growing up in Springfield, Mass., seeing Shirley Chisholm, as a Congresswoman, and watching Barbara Jordan, from Texas, I had that fire that [taught me] if they can do it — so can I.”