The University of Maryland, College Park has renamed its main administration building in honor of one of its most high-profile — and valuable — alumni, state Senate President Emeritus Thomas V. Mike Miller Jr. (D-Calvert).

Because of the COVID-19 crisis, the school had to forgo a traditional announcement ceremony, opting instead for a gathering of Miller’s large family and a tribute video that featured several current and former high-ranking school leaders, including outgoing president Wallace D. Loh.

The Thomas V. Miller Administration building — formerly Main Administration — is located on Regents Drive, along the eastern edge of McKeldin Mall, a long grassy, tree-lined expanse that serves as the unofficial center of the sprawling campus. 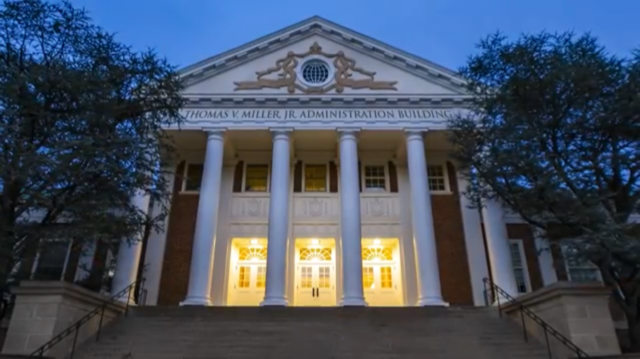 Miller graduated from Maryland in 1964. He and wife of 55 years, Patti, met while they were students.

He used his enormous influence to shower the school with resources.

Loh pressed to have the video completed and the renaming ceremony held before his tenure as the school’s president ended. His last day was Tuesday.

“For all that Maryland Senate President Mike Miller has done, over the course of three decades, for the students, the faculty, and the staff of UMD –– those who are here now; those who came before; and those who will come in the generations ahead –– we proudly, and gratefully, etch his name in stone, upon this landmark Main Administration Building,” Loh said in the video.

Miller was first elected to the legislature in 1970, when he won a race for the House of Delegates. Elected to the Senate in 1974, he became Senate President 12 years later and held the post a record 33 years.

He spearheaded legislation that reorganized higher education in Maryland in 1988, designating College Park as the state’s flagship institution. University officials said the funding boost that flowed from the reorganization were instrumental in the school’s rise to national prominence.

“His name will remind us all of his unwavering pursuit of service to the great state of Maryland and to the world.”

House Speaker Adrienne A. Jones (D-Baltimore County) announced that she is sponsoring legislation aimed at enshrining abortion access in the state constitution.