This is the first in a three-part series on life in Langley Park, a largely immigrant community in Prince George’s County where difficult living conditions have been made worse by COVID-19 and the accompanying economic crisis.

Since her husband lost his job in March, Josefina Alonzo hasn’t paid the rent.

They had never missed the $1,600 monthly payment for their two-bedroom apartment in Langley Park, the predominately Hispanic community on the northern edge of Prince Georges County, near Hyattsville and College Park.

The novel coronavirus has made things worse for the couple and their four children, who range in age from 6 to 16.

Alonzo, who wears a mask, says people are sick all around her, a fact backed up by the Maryland Department of Health, which listed Langley Park with 2,207 COVID-19 cases as of Monday — the most for any Zip code in the state.

“My family is poor. My father signed away the little land that we had to get me here,” she says. The month-long journey started on foot through the mountains, continued through the Mexican desert, and in the dark, at night, without legal papers, into the U.S.

Desperate to help her family, but undocumented in the U.S., she remained in the shadows, babysitting for cash to send back home.

But Alonzo hasn’t been employed since her six-year-old daughter was born with a life-threatening heart condition. “She wasn’t supposed to live,” Alonzo says. “Now she depends on two drugs,” which the child’s insurance covers. “I’m constantly worried. She is at risk for infection and now the coronavirus.”

Neither Alonzo nor her husband qualify for unemployment or health insurance. They don’t have a car, and can’t afford the cab ride to any of the food distribution centers in the general area. Until recently, a nonprofit delivered food.

“I’m not sure how long that will last,” Alonzo says. “And since school ended, the kids have little to do.”

“When the COVID emergency is lifted, the eviction papers will come,” she adds. “I’m afraid, we’ll be put on the street.”

Alonzo lives in the Villas of Langley Park, a 590-unit low-rise garden apartment complex, which was recently sold for $87.5 million. Its occupants are largely Hispanic and working poor. 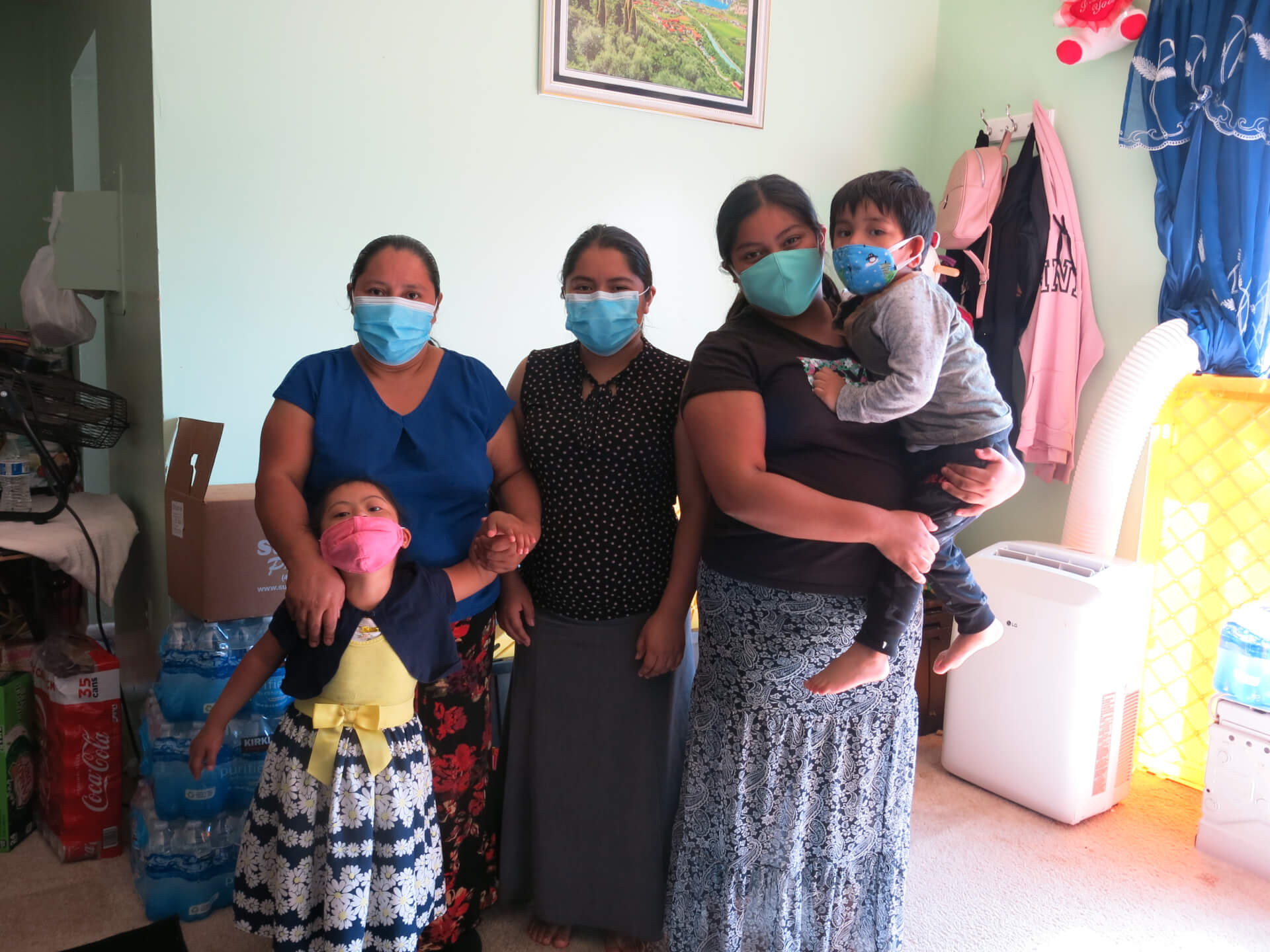 At the top of the hill is the McCormick-Goodhart Mansion, a property on the National Register of Historic Places. In 2010 the 28-room, 1928 Colonial Revival-style estate became headquarters for CASA, the largest immigrant rights group in the Mid-Atlantic, which offers literacy education, worker protection, legal and health services in Maryland, Virginia and Pennsylvania.

CASA is where Josefina Alonzo turns to for help.

Much of CASA’s work revolves around its 100,000 members, immigrants like Alonzo, who advocate for their rights by agreeing to speak up on issues, including the current drive calling on Maryland Gov. Lawrence J. Hogan Jr. (R) to put a hold on rent and debt accumulation during Maryland’s State of Emergency, and an extension on the moratorium on evictions for a year beyond that.

On the first of the month the message is amplified in Langley Park with #CancelTheRent banners hanging from tenant balconies and in a virtual town hall attended by 150 CASA members, who, one-by-one shared stories and held placards across a Zoom platform.

From her couch in the Villas, with her children seated beside her, Alonzo says the family had managed on her husband’s income before the pandemic.

“Now, we can’t,” she says. “We need the governor to listen, to help us, to understand what we’re going through with COVID-19.”

Willow Lung-Amam is an associate professor in the Urban Studies and Planning Program at the University of Maryland. She has worked on several housing studies with CASA, the most recent, Housing Matters, released late last year, which takes a deeper dive into Langley Park, “to help [develop] the conditions for quality, healthy and affordable housing,” she says.

The report describes Langley Park as 82% Hispanic with one of the largest concentrations of undocumented Latino immigrants in Prince George’s County. And, with a growing number of immigrants, poverty has increased, with the median income at $59,422 or nearly $16,000 lower than that of the county or the state, according to the Urban Institute, a Washington, D.C.-based think tank.

Langley Park’s 19,517 residents live predominantly in 13 apartment complexes, which for many years have been considered substandard, overcrowded, and neglected, presenting a threat to health and safety. “We knew that things were bad, but not how bad,” Lung-Amam says.

Violation data on apartment complexes, including two on the county’s most distressed properties list since 2012, was hard to quantify.

Alonzo, who rarely complains, says last year she was living in a basement apartment when it flooded, and moved to a third-floor unit within days. “I’ve seen rats in the basement with the garbage, but not up here,” she says.

“The community overall has some of the worst housing conditions in the county, a critical finding,” Lung-Amam says.

“It’s worse than you can imagine,” says Lidia Rivas, a CASA community organizer who lives in Langley Park, and keeps track of substandard living conditions on her cell phone. “All kinds of bugs, roaches, flooded basements, and crumbling walls… And, now with so many sick and unemployed, I get calls all day long for where food is being distributed, or gift cards, or where there’s work. Sometimes I can’t sleep, there’s so much to do.” 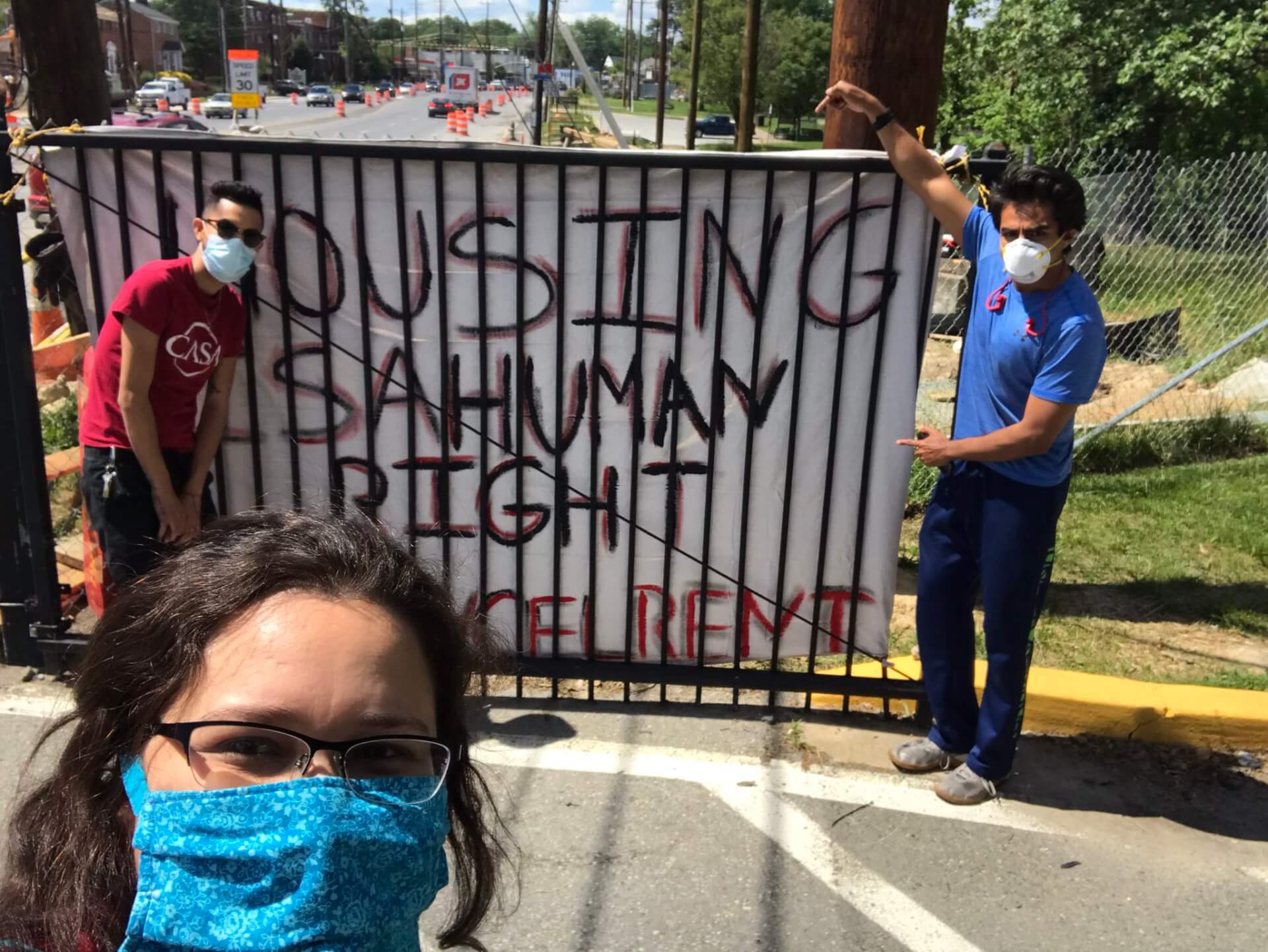 CASA housing activists on the streets of Langley Park. Photo courtesy of CASA

In 2008, Rivas, a college-educated social studies teacher, fled multiple gang attacks in her native El Salvador. She arrived in the U.S. legally, thanks to her parents who were residents, and later settled in Langley Park with her husband. She quickly got to know people, noting many were undocumented, lacked health insurance, spoke little English or even Spanish — like Alonzo who speaks Mam, a Mayan language. Rivas offered literacy classes in her home, and gained trust in the community.

CASA hired Rivas to put her organizing skills to work.

Over the course of the 2-year study, project managers knocked on doors, held town hall meetings and created a monthly team-building coalition to get residents, local officials, and property owners at the same table.

They made dozens of recommendations including requiring training and certification for all property managers, improving code compliance and enforcement, mandating annual inspections of all rental properties, and opening a tenant advocate office, similar to the one in Washington, D.C.

Tenants have a right to call and ask for an inspection, or turn to Community Legal Services for help to settle disputes before a judge at the Hyattsville courthouse.

Despite these protections, Lung-Amam says the study finds tenants often don’t know or understand their rights, and fail to act.

“They have fears related to legal status, or landlord retaliatory action, which prevents tenants from reporting violations,” she says. “So, when code enforcement knocks on the door, residents don’t answer.”

The Prince George’s County Council passed a bill in 2017 that imposed fines on property owners of multifamily rental housing units for code violations. But enforcement has been a challenge.

“In the past, multifamily building owners were not receiving fines for code violations. So, there was no incentive to keep up the properties in exploited communities,” says Deni  Taveras (D), who represents District 2, which includes Langley Park, on the Prince Georges County Council. “That should have changed with the passing of my bill a few years back.”

Some of the recommendations in the University of Maryland/CASA study became the basis for another tenant protection bill, which failed to pass in 2019.

The Apartment and Office Building Association of Metropolitan Washington, the trade group for the housing industry, worked with County Councilmember Thomas Dernoga (D) on the failed bill. AOBA officials said in a statement that they expect to see a variation of the bill introduced in the future, and will work “to develop a balanced bill” for renters and owners.

Since the pandemic lockdown many tenants in Langley Park aren’t paying rent.

“The last time I asked my multifamily buildings in March their delinquency rate was in the 15%-25% range. Now I imagine that range to have at least doubled or tripled,” Taveras says. AOBA confirms that calculated guess. Uncollected rent from one unnamed AOBA member with 11,000 units in Prince Georges was according to AOBA records, “$1,811,361, on May 31, 2020 compared to the uncollected rent balance of $316,001 on May 31, 2019.”

Renters did get a temporary reprieve on June 9, when the Prince George’s County Council unanimously passed a law that will prevent rent increases, ban late fees, and stop evictions for those impacted by COVID-19, for three months after the health emergency is lifted.

But will it be enough?

“I am concerned what will happen after November, if they still owe money, especially if there is a second wave of the pandemic,” Taveras says.

AOBA says, “The bill codifies the voluntary actions its members decided to take in March, and that it wanted to caution the Council in places where the law did not comply with Maryland state law.”

No landlords replied to Maryland Matters’ requests for comments on rent payment or other housing issue, despite multiple attempts to reach two of the bigger players, Southern Management, which oversees three Langley Park complexes, and Jair Lynch, which recently purchased the Villas of Langley Park for $87.5 million.

In mid-June, Lidia Rivas recruited four residents, including Josefina Alonzo, to negotiate rent payments with the management. They met with Brittany Taylor, the property manager at the Villas of Langley Park, the only company in Langley Park that agreed to sit down and talk.

While “the meeting was cordial.” Rivas says, the following week the group was informed by a company vice president that no help would be forthcoming.

“They had little to offer us — maybe something to the four families [at the meeting], but nothing to anyone else,” Rivas says. “We can’t accept that. We represent so many more.”

CASA is planning a protest on rent issues in front of Government House, the governor’s mansion in Annapolis, on July 1.

Alonzo says she is all in. She is more afraid of what she will lose if she doesn’t speak up. “We are immigrants without papers. We are [also] human beings with rights [including] the freedom to raise our voices.”

“If we’re organized, we can succeed,” Rivas says, “but only if we keep fighting.”

Rosanne Skirble is a freelance writer in Silver Spring.

Comptroller Peter V.R. Franchot has declined an opportunity to debate his main rivals in the Democratic gubernatorial primary later this week — a decision…