Two weeks to the day after the death of George Floyd at the hands of Minneapolis police officers, lawyers and other staffers from the Maryland Office of the Public Defender took to the streets of downtown Baltimore to call for an end to racism and police brutality.

Over 100 public defenders from across the state convened in front of the Clarence M. Mitchell, Jr. Courthouse Monday afternoon in support of black individuals who have been killed or brutalized by police, including Floyd, Breonna Taylor, who was shot by officers in Louisville, Ky., in March and Tony McDade, who was shot by a police officer in Tallahassee, Fla.

Maryland Public Defender Paul DeWolfe said that public defenders across the country were congregating at the same time “to protest what’s happening to our clients, and black lives in general … at the hands of the police.”

“In North Carolina, in South Carolina, in Georgia, in Mississippi — all over the country, public defenders are meeting in solidarity for our clients and our black brethren for the treatment that they received at the hands of the police throughout our history,” he told the crowd.

During his speech, DeWolfe referenced a study released by the Justice Policy Institute late last year that revealed that Maryland has the highest percentage of incarcerated black men in the country. The state with the second-highest is Mississippi, which lags behind by a full 25%.

Kirsten Downs, the district public defender for Baltimore City, told the crowd that the criminal justice system has left black people behind: over-prosecuted and over-sentenced — often because of a lack of access to employment, adequate education and health care.

“But we stand here as defenders,” Downs said. “We will call out racism and injustice in the courtroom.”

Downs and three others read 127 names of black people who had been killed by Maryland police officers, the crowd repeating each one. The list started with Freddie Gray, who died in 2015 after being held in the custody of the Baltimore Police Department.

Every few moments, Downs and her fellow announcers would stop reading to ask attendees if they knew any of those named.

“Raise your hand if any of those names have been one time your client,” she asked.

Only a few hands went up, including that Anne-Marie Gering, who works for the Baltimore City Public Defenders Office.

Gering didn’t feel comfortable disclosing the name she recognized, but told Maryland Matters that it was a “bad situation” that she found “crushing.”

“It’s just typical of how [the police] treat our clients with a presumption that they don’t matter because of their crimes and because of who they are — poor people of color in the city,” Gering explained.

She said that the root of the problem lies in the culture of police departments “that has been prevalent for years.”

“It’s good for people to see that it’s not just an isolated event with George Floyd or Freddie Gray — there are a multitude of our clients who have been killed by the cops,” Gering said.

The attorneys held eight minutes and 46-seconds of silence, representing the time that former Minneapolis Police Officer Derek Chauvin pinned Floyd to the concrete by his neck. 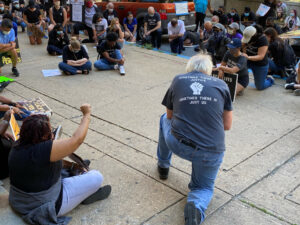 Some sat with their heads hanging low, a few stood strong with their fists raised and many took a knee — including DeWolfe, who began to tremble as the period of silence wore on.

Following the silence, the horde marched with their signs past the Baltimore City Juvenile Justice Center to gather outside of the Baltimore Central Booking and Intake Center.

Outside of Central Booking, Assistant Public Defender Dyan Owens said that it’s time for Maryland public defenders to learn about the #8cantwait anti-use of force campaign and policy surrounding defunding the police.

“These are two things that we can do as the Office of the Public Defender — as public defenders that care for our clients and our community — because everyone wants to say that public defenders don’t care, but we all know that is a lie,” she said.

“This does not end here. It’s only the beginning.”

As the crowd began to walk down the street towards the perimeter of the Chesapeake Detention Facility, protesters began chanting “OPD Loves you!” and “Black lives matter!” to those held inside, almost in harmony with a cacophony of honks from supportive drivers pushing past on East Madison Street.