Cocaine hasn’t received as much attention in recent years, but it is increasingly playing a role in the opioid epidemic, state data show.

Despite some good news from the first quarter of this year, cocaine-related deaths have skyrocketed annually in Maryland since 2015, with nearly half of those occurring in Baltimore. The vast majority of those deaths — 82%, according to the Maryland Department of Health — involved fentanyl, a powerful and dangerous synthetic opioid.

Nearly 900 people suffered cocaine-related deaths in Maryland in 2018, according to a report from the Maryland Department of Health released in May. Of those, nearly half — 423 — occurred in Baltimore, which accounts for about 10% of the state’s population. Maryland’s Baltimore and Anne Arundel counties had the second- and third-most deaths in the state in 2018, with 144 and 96, respectively. 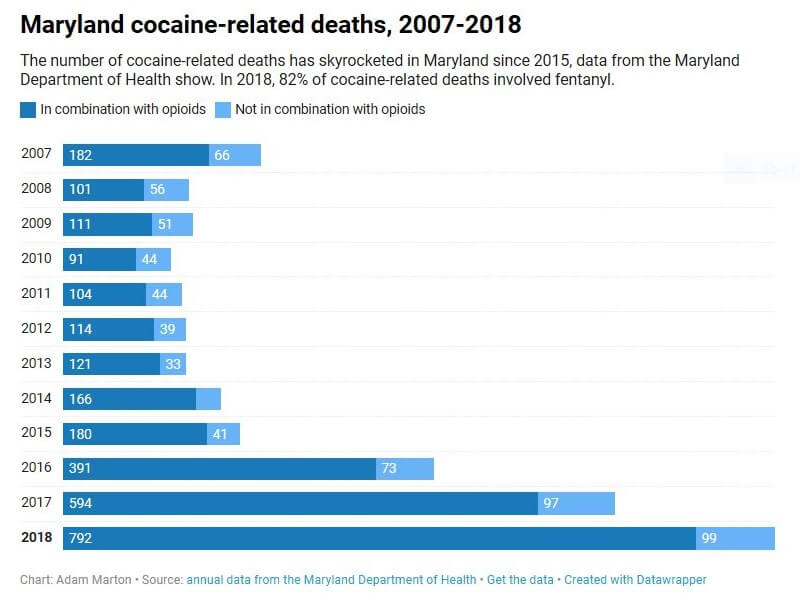 Across Maryland, cocaine was involved in 186 deaths in the first quarter of 2019, down from 236 at the same point last year, according to preliminary counts from the state health department published in June. More than half of this year’s deaths through March — 96 — have occurred in Baltimore.

In Anne Arundel County, overdose deaths are down more than 20% compared to last year at this time, according to Elin Jones, the county health department’s public information director.

She credits increased awareness of the overdose-reversal drug naloxone and Anne Arundel’s Safe Stations program, through which people struggling with substance use disorder can enter any police or fire station in the county without the risk of arrest and get connected with healthcare and social services.

It’s too early to tell whether the decline will continue, according to Dr. Michael Fingerhood, a professor at the Johns Hopkins University School of Medicine who studies addiction.

“In Baltimore City we are seeing almost every illicit drug laced with fentanyl,” said Adrienne Breidenstine, the vice president of policy and communications for the nonprofit Behavioral Health System Baltimore.

Breidenstine said no method of use — snorting, smoking or injecting — is more likely to cause an overdose than any other.

“It’s really the amount and the potency,” she said.

Andrea Walker, director of Behavioral Health Services for Frederick County, said users are often surprised when their drugs are laced — meaning another substance has been added to increase potency and/or reduce cost. Many use cocaine alongside heroin, but others use cocaine by itself, and are surprised to find it laced, Walker said.

“Individuals don’t know what they’re getting,” she said. “Fentanyl has contaminated the drug supply.”

People understand the risks associated with opioids, she said, but “there may be a perception that cocaine is less lethal.”

Victoria Wagener, who lives in Anne Arundel County, said she believes one of her best friends died after using cocaine laced with fentanyl. She said he had been trying to stay away from heroin to avoid overdosing and considered cocaine less risky.

The risks are just as high for those who use cocaine on the weekends as for those who use it more regularly, said Beth Schmidt, the cofounder and treasurer of Maryland Heroin Awareness Advocates, which fights addiction, supports addicts and their families, and raises awareness through education and other programming.

“They have no clue” that their cocaine may be contaminated, Schmidt said.

Fingerhood said he doesn’t know why cocaine is being laced with fentanyl because the drugs have such different effects.

“If you want to use cocaine, you’re not looking for the effect of an opioid,” he said. “It makes no sense to me why you would want to kill your customers.”

He said speedballing — mixing cocaine with an opioid — is popular because it tempers the most significant effects of each drug.

Opioids — including heroin, fentanyl, oxycodone and morphine — slow the breath and heart rate, make the body feel heavy and cause a pleasurable rush, and their effects last for hours, according to the National Institute on Drug Abuse. Cocaine is a stimulant and causes intense happiness and energy, irritability and aggression, and the high lasts about a half hour. Both are very addictive.

Wagener, who has a history of addiction, said when one uses cocaine laced with an opioid, “you’ll start nodding when you shouldn’t be.” 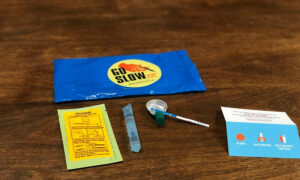 A fentanyl test kit distributed for free by Bmore POWER. The kit includes capsules of clean water, small dishes and fentanyl test strips. The strips display one line if the substance contains fentanyl and two lines if it does not. The group urges users to always have naloxone, to inject small amounts slowly and to have friends available to help in the event of an overdose. Capital News Service photo by Ian Round

But many users, including Wagener and members of the harm reduction group Bmore POWER, said drug users often seek out fentanyl. Wagener said she’s overdosed 13 times, and after the first time, she went back to the same dealer.

“They chasing death,” said Ronald Barksdale, who works for Bmore POWER. “They want to know wherever the bomb at.”

Furthermore, opioids have a greater impact on bodies that have not developed a tolerance to them.

The data show that more men than women suffer cocaine-related deaths, and that people of color are affected disproportionately. Baltimore Health Commissioner Dr. Letitia Dzirasa said the average age at death in these cases in the city is mid-40s.

The Baltimore City Health Department, in partnership with Behavioral Health System Baltimore, opened a crisis stabilization center this spring, one of only a few in the country. People who are under the influence of drugs or alcohol can come to sober up and receive medical care and wrap-around social services. The center also aims to keep people out of emergency departments and the criminal justice system.

D’Paul Nibber, a public information officer for the Baltimore City Health Department, said it can serve 15 people at a time. A pilot program has operated for the past year.

The city’s health department also sponsors needle exchanges throughout the city, especially in the neighborhoods hit hardest by the opioid epidemic. It distributes naloxone, which reverses overdoses, and educates the public about how to use it. Dzirasa said the department also seeks to educate the public about the stigma associated with addiction.

In Anne Arundel County, those who need help can go to any police or fire station without the risk of arrest. Ashburn, from the Anne Arundel County Police, said more than 800 people have used the Safe Stations program this year, and 1,206 used it last year.

Wagener said she got help through the county’s Safe Stations program two and a half years ago, and one of her friends used it just the other day.

Many health departments and nonprofit groups in Maryland offer fentanyl test strips as well as naloxone for free.

At the state level, Gov. Lawrence J. Hogan Jr. (R) created the Heroin and Opioid Emergency Task Force in 2015 and the Opioid Operational Command Center in 2017. And in August, Hogan announced he would award $10 million in grants to aid jurisdictions’ efforts to combat the opioid crisis.

According to the U.S. Drug Enforcement Agency’s 2018 National Drug Threat Assessment, cocaine production in Colombia, the source of over 90% of the cocaine that ends up in the U.S., rose steadily between 2012 and 2017.

The report stated that the proliferation of fentanyl, along with the increasing production of cocaine, means that cocaine-related deaths could reach “epidemic levels in the next few years.”

A backlog of invoice payments that the Maryland Department of Health owes to public health contractors has hampered their ability to assist those most in need.

Maryland lawmakers are sponsoring bills to divert more mental health crisis calls from law enforcement and transition the state to a 988 crisis hotline.