The board has been authorized under legislation passed during this year’s General Assembly session, and it is charged with lowering the costs of runaway prescription drug prices.

“I can think of no better Marylander than Van Mitchell to spearhead this new and critical important independent agency,” Jones said in a statement. “Van won’t be afraid to tell the truth about drug pricing and fight for lower costs when appropriate.”

“Prescription drug costs have become a topic of daily conversation and concern among families across the country,” he said. “In fact, drug costs are often cited as the top concern among our senior citizens when it comes to health-related expenses.

In addition to Mitchell’s appointment, Jones, Miller and Attorney General Brian E. Frosh (D) each appointed members to the fledgling board on Thursday.

Jones named Dr. Eberechukwu (Ebere) Onukwugha, an associate professor in the Department of Pharmaceutical Health Services Research at the University of Maryland School of Pharmacy as the House appointee. Miller tapped Dr. George S. Malouf Jr., a full-time practicing medical doctor and ophthalmologist, as the Senate appointee. Gerard F. Anderson, the director of the Johns Hopkins Center for Hospital Finance and Management, and a professor of health policy and management and international health and medicine, is Frosh’s designee.

“This agency is essentially a startup company, focused on one of the most important issues in our state,” Miller said.

Under terms of the law, Hogan is also supposed to designate someone to serve on the board, but that hasn’t happened yet. In an email to Maryland Matters Thursday, Hogan spokesman Michael Ricci said there is no timetable yet for appointing someone.

Hogan also has yet to release funding that the General Assembly set aside to establish the board – part of an ongoing dispute with lawmakers about allocations for certain legislative priorities. The budget passed by the Maryland General Assembly included $750,000 in funding for the Prescription Drug Affordability Board to hire staff and begin its work.

“We are in discussions with our Health Department – where we have economists who look at this issue every day – about ways to stand up the board,” Ricci said in his email.

In a related development, U.S. Sen. Benjamin L. Cardin (D-Md.) is scheduled to visit Baltimore’s Northern Pharmacy and Medical Equipment on Friday afternoon for a roundtable discussion with community pharmacists, public health experts and patients’ advocates on the battle to lower the cost of prescription drugs. 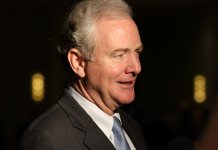