The dead zone identified in the Chesapeake Bay alarmingly is growing. Monitoring data gleaned by the Maryland Natural Resources Department reveals an area with little to no oxygen covering two cubic miles as of late July.

It’s the worst picture painted so far, with the most concerning areas including the lower Potomac and Patuxent rivers, as well as much of the bay from Baltimore to the mouth of the York River.

The early July 1985-2018 average hypoxic volume was 1.36 cubic miles and in late July was 1.34 cubic miles, the DNR report revealed. The most recent hypoxic volumes were respectively the fourth largest for early July and second largest for late July since 1985. Scientists anticipated a larger than average oxygen-depleted zone this summer because of massive rainfall leading to high waterflow into the Chesapeake Bay, which in turn dumped higher nutrient loads.

“Those nutrients fuel algal blooms, which die and are consumed by bacteria, which then deplete oxygen in bottom waters. Also, average winds were generally low in July, which prevented oxygen from mixing into deeper waters,” the DNR report stated.

Scientists fear that the worsening situation in the bay will negatively impact the crab, fish, oyster and other populations in the Chesapeake Bay that require oxygen. That’s not good news for those whose livelihood depends upon harvesting the ocean.

The juvenile blue crab population—crabs that will grow to harvestable size this fall—was estimated to be 323 million, above the long-term average of 224 million. Due to the warmer weather this past winter, the percent of crabs that died in between the fall and spring was lower than usual at 1.8 percent compared to 6.37 percent last winter.

To see the story by Kristin Danley-Greiner as it originally appeared on Patch.com, click here. 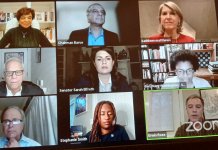