What a difference a year makes.

Last year, the Maryland Black Caucus Foundation held its inaugural summertime unity breakfast – with a hefty legislative agenda for the upcoming General Assembly session and even more ambitious goals for 2030. But no one really knew how it was all going to turn out.

A year later, on Saturday, the Black Caucus Foundation held its second annual unity breakfast, and there was plenty to celebrate. Hundreds of people flowed into Martin’s Crosswinds catering hall in Greenbelt to the sounds of a live jazz combo. The event itself was also a combination – of politics, policy and prayer.

Lawmakers and their allies hailed their legislative victories from the 2019 session. And even more emphatically, they hailed the historic ascension of Del. Adrienne A. Jones (D-Baltimore County) to the position of speaker of the House of Delegates 2 ½ months ago – an event no one could have foreseen in July 2018.

Jones is the first African-American – and the first woman – to hold the speaker’s gavel in the long history of the Maryland General Assembly.

But legislative sausage-making is never pretty – and neither was the politicking that led up to Jones’ election on May 1 to replace the late Speaker Michael E. Busch (D), who had died three weeks earlier. Some of the speakers at Saturday’s breakfast made glancing references to the political fights of the past, but most preached unity.

“There’s some who think it’s more important to fight each other than to fight for the things that we believe in,” Alsobrooks said. “Staying unified is so very important.”

And unity, for the most part, was on display, as more than half of the Legislative Black Caucus crowded onto the stage for a group photograph. The caucus is now at a record 58 members – 12 senators and 46 delegates. That’s almost a third of the 188-member General Assembly.

When the caucus was created in 1970, it consisted of just 15 members, from Baltimore and Prince George’s. In recent years, its membership has expanded to the Eastern Shore, Montgomery, Anne Arundel, Charles and Howard counties.

“You’re all over the place,” said U.S. Rep. Anthony G. Brown (D), whose political career began in the House of Delegates.

The history – and growth – of the caucus will be the subject of a documentary now in production and due to be completed in time for its 50th anniversary next year. An excerpt was played at the breakfast Saturday.

The caucus – and the Black Caucus Foundation – continues to eye long-term priorities, which have been packaged into something they’re calling the Maryland Black Agenda 2030. The six pillars of the agenda: community and economic development; education; health and human resources; labor, employment and training; law enforcement and judicial matters; and environment and sustainable development.

In this year’s session, the black caucus made passage of a bill to raise the legal age to purchase tobacco products to 21 its top priority, and it also played a leading role in passing the $15-an-hour minimum wage and key criminal justice measures. 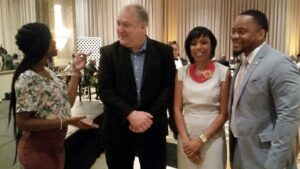 Maryland’s African-American leaders were rocked this session when news surfaced that Del. Mary Ann Lisanti (D-Harford) uttered a racial epithet at an after-hours gathering in Annapolis. Alsobrooks, whose county was the target of the epithet, recalled asking her father, a veteran of the civil rights movement, how to respond. His advice, she said: “Don’t fight people about the wisdom of feeding dinosaurs.”

The important thing, Alsobrooks said, is that lawmakers weren’t distracted by their shock and anger, focused on their work, and “kept our children’s future front of mine.”

The black caucus did divide initially after Busch’s death, but like the entire Democratic Caucus, eventually unified behind Jones, who days earlier had withdrawn from the race.

“She didn’t promote herself,” Alsobrooks said. “When the vote was called, she moved aside. But guess what – God promoted her.”

Several speakers said Jones would not be in her newfound position of power if it hadn’t been for the Legislative Black Caucus. Jones agreed.

“We were not going to wait another hour, another minute” to install an African-American speaker, said Del. Darryl Barnes (D-Prince George’s), chairman of the caucus.

“What a journey this year has been,” Jones said, when it was her turn to speak. She chose mostly to focus on education policy, and said she was “heartbroken” about the achievement gap between white and minority students.

Jones said House Bill 1 in next year’s legislative session – a designation generally reserved for a top leadership priority – would be a measure to spend more than $2 billion on school construction over the next decade.

Jones, who sits on the Kirwan Commission, which is advancing proposals to reform and improve public education in Maryland, also vowed to fight for the state investments the commission envisions to meet its goals.

“If we achieve nothing else in the General Assembly in this term, we must make sure that our schools are the best in the nation,” she said, to great cheers.

The lawmakers in the audience clearly took Jones’ words to heart.

“Well,” Barnes said at the conclusion of the event, “I think we have our marching orders.”