In a session marked by ailing leaders and an ambitious agenda propelled by a younger, more progressive class of Democratic lawmakers, the 439th General Assembly closed on a somber note Monday following the death a day earlier of House Speaker Michael E. Busch (D-Anne Arundel). But not before legislators pushed through hundreds of additional votes, including final approvals of Busch priorities.

In the Senate, the first order of business Monday morning was overriding the veto of Gov. Lawrence J. Hogan Jr. (R) on Busch’s bill to permanently protect five oyster sanctuaries in the Chesapeake Bay. The bill was enacted by a 29-16 override vote.

Lawmakers also gave final approval on Monday to a bill reforming the University of Maryland Medical System board. The board has come under scrutiny after revelations of insider dealing, including a book-printing deal that enriched Baltimore City Mayor Catherine E. Pugh (D) during her tenure as mayor and as a state senator. The bill, if signed by Hogan, would replace the board with new members over a period of months and add new requirements for financial disclosure, prohibitions on no-bid contracts, a ban on board members having financial relationships with the institution and other safeguards.

When the bill crossed back over to the House just after 10:30 p.m., the chamber passed the last bill Busch introduced unanimously, breaking out into a standing ovation – and plenty of tears.

“Even from the great beyond, his work is challenging leaders to operate with the highest professional ethics and personal integrity,” Del. Stephanie Smith (D-Baltimore City) tweeted.

The General Assembly also passed a bill Monday from Sen. William C. Smith Jr. (D-Montgomery) in his absence, after Smith deployed to Afghanistan at the end of March. The bill, crossfiled by Del. Jazz Lewis (D-Prince George’s), would update policies around the placement of minors placed in restrictive housing units at state correctional facilities.

The final bill says access to recreation, education, and programming for youth in restrictive housing should be maximized unless it would pose a risk of physical harm to the minor or another. Conferees also struck a House amendment that would have created a cause of action in the courts if a child is placed in restrictive housing in violation of the bill’s provisions.

In total, lawmakers passed more than 850 bills during the 90-day legislative session. Other items that saw final approval on the last day of session included a bill to create a Prescription Drug Affordability Board, the Clean Energy Jobs Act and a measure to add criminal penalties for harming a pregnant woman.

In the final hours before adjournment, both chambers approved a measure to create a panel to study ways the state might clamp down on high-priced medications. The Senate vote was 37-8. In the House it was 96-37.

Originally, House Bill 768, and its Senate companion, SB 759, created a Prescription Drug Affordability Board with the power to create “upper payment limits” — what critics call price controls — on drugs that cost more than $30,000 for a single course and those whose costs spike dramatically.

The Senate amended the bill to adopt a more research-oriented approach in which a panel of experts spends a year looking at what other states are doing to reduce drug prices. The panel would then make recommendations to the Legislative Policy Committee, which is made up of legislative leaders and committee chairs.

The original bill applied to all drug plans in the state. As concerns surfaced that Hogan might veto the measure, it was scaled back to apply only to plans that provide coverage to county and state government employees.

Because the original concept would have established the nation’s first board with the power to cap payments on high-priced drugs, the pharmaceutical lobby expressed major concerns about the bill. And lurking in the background was the defeat in court of the state’s 2017 attempt to rein in the cost of some generic drugs.

The earliest consumers might see price relief from the measure is 2021. Despite the prolonged process, Tammy Bresnahan, AARP Maryland’s associate state director for advocacy, praised the legislature.

“The move puts Maryland at the forefront of states seeking to combat the high cost of pharmaceuticals,” she said in a statement.

A final version of the Clean Energy Jobs Act, which requires the state’s electric utilities to acquire half of their energy from renewable sources by 2030, passed 95-40 in the House and 31-15 in the Senate.

The legislation originally passed in the Senate more than three weeks ago but was stalled in the House until late last week. On Monday night, Republicans attempted to slow-walk the legislation, offering 10 amendments on the House floor that failed and launching a mini-filibuster in the Senate that necessitated a vote to limit debate on the measure.

“You may love the environment, but this bill hates ratepayers,” Del. Warren E. Miller (R-Howard and Carroll) told his Democratic colleagues. 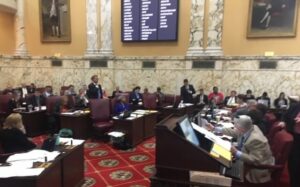 The Senate in its final debate of the Clean Energy Jobs Act Monday night. Photo by Bruce DePuyt

The bill was the No. 1 priority of environmental groups this session.

“This bill now makes Maryland a true national leader in the fight against climate change and in favor of clean energy,” said Mike Tidwell, director of the Chesapeake Climate Action Network and CCAN Action Fund.

Also on the environmental front, a conference committee settled on changes to a bill that creates state grants to aid localities that have experienced $1 million or more in infrastructure damage caused by a flood event since 2009. The negotiated bill would direct the governor to invest $8 million in the program through 2023.

Prompted by serious catastrophic floods in Ellicott City in 2016 and 2018, passage of the bill was cheered by Howard County Executive Calvin Ball (D).

Though lawmakers came together to pass The Blueprint for Maryland’s Future, which implements the initial policy and funding proposals of the Kirwan Commission, a grand compromise wasn’t reached on a school construction bill passed by the House. The measure stalled in the Senate, where lawmakers took a more fiscally conservative approach, providing $500 million to school construction in the coming year, but choosing not to commit to the $2.2 billion six-year plan passed by the House of Delegates.

“We all just said from the get-go on our committee, we want to have a funding source for it before we move forward,” Senate Budget and Taxation Chair Nancy J. King (D-Montgomery) said.

Another group of negotiators agreed to move forward a version of Laura & Reid’s Law, settling on a measure that creates a separate crime for committing a crime of violence against a person the assailant knows or believes to be pregnant.

Lawmakers also agreed on a bill to “ban the box,” which would prohibit employers from asking about a job applicant’s criminal history at any time before the first in-person interview.

A measure that would have extended access to protective orders to rape or sexual assault survivors failed to pass. A conference committee report passed the House, but didn’t pass in the Senate, where it was met with a series of 11th hour – and seemingly time-wasting – questions from Sen. Robert A. Cassilly (R-Harford).

A bill that would have changed how state courts dismiss criminal charges against defendants found incompetent to stand trial also failed to pass. Conference committees were appointed, but didn’t come to an agreement.

Other measures that failed to find resolution before the Legislature adjourned Sine Die included a measure to fund improvements at Pimlico and other horse tracks across the state, a bill to create an asbestos mediation office in state government, and legislation requiring background checks for private sales of long guns.

Advocates for some of the bills said the work this session will set the groundwork for the future.

Del. Vanessa E. Atterbeary (D-Howard) said House and Senate negotiators had settled on a version of the background check for long guns measure, but ran out of time. Hugging supporters from Moms Demand Action outside the House chamber, she said supporters would file a bill earlier next year, working from the compromise measure.

“To say I’m disappointed is an understatement,” she said.

The bill’s failure came after Second Amendment activists had paid a propeller plane to drag a banner message around State Circle during the afternoon reading: “WE WILL NOT COMPLY! HOW ABOUT YOU LARRY?”

“Today that just seems totally inappropriate,” Hogan said. “Our focus really is on mourning Speaker Mike Busch, who was a great man, just an incredible leader. And it’s hard to imagine that we’re going to close out this 439th legislative session without a guy whose been a leader of the House for the past 16 years and really an institution in the institution of state government for 32 years. He’s an incredible guy, a mentor, a coach, a friend to so many people.”

The governor and presiding officers also will not hold a traditional bill signing Tuesday morning after session, out of respect for Busch and his family.

Bruce DePuyt and Josh Kurtz contributed to this report.