Teachers and students who attended Monday night’s March For Our Schools rally near the State House sketched a portrait of crowded classrooms, aging buildings and a lack of resources to help young people who often face a complicated array of challenges.

They also expressed frustration that the public seems not to recognize that a lack of funding is hurting the state’s educational system.

“I’m here because I see what the lack of funding is doing in our schools,” said Nena Anyanwu, a special education and math teacher at Dwight Eisenhower Middle School in Laurel. 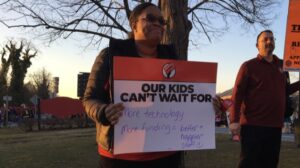 Nena Anyanwu is a teacher at Dwight Eisenhower Middle School in Laurel. She says school buildings are outdated and there’s not enough space for kids to learn. Photo by Bruce DePuyt

“We have a lot of students that are in classes with 30 or more students. Not enough technology. The buildings are outdated. Not enough space for the kids to learn,” she said.

Like many educators who attended Monday’s rally, science teacher Don Ziegler had a sign in one hand and a mini cow bell in the other, which he shook to signal agreement with the statements made by education advocates who addressed the event.

“Our schools have been underfunded for many, many years,” said Ziegler, who teaches science at Meade High School in Anne Arundel.

“A lot of the kids come to school with lots of social problems. We need teachers that can handle speakers of other languages. We need guidance counselors, we need social services, we need school nurses,” he said.

He called the lack of pay raises and the growth in class size “unsustainable.”

Nissa Copemann, a lawyer who took a 50 percent pay cut when she became a teacher, said there is a lack of awareness about the plight of Maryland’s schools — even among people whose children attend public school.

“Many people, parents included, are still working on the assumption that teachers are the Mother Teresas of the education system, that we go into it with this notion of ‘it’s noble to be impoverished,’” she said. “That’s not the case. We’re doing it because we want to educate children.” 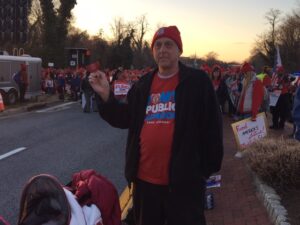 Don Ziegler, a science teacher at Meade High School in Anne Arundel County, attends the rally in Annapolis on Monday. “Our schools have been underfunded for many, many years,” he says. Photo by Bruce DePuyt

“We have schools that are falling apart. In my building alone, the heat, the air conditioner doesn’t work. I don’t have enough books for all my students. I have students who have hunger issues. We don’t have drinkable water in our buildings. The list goes on and on,” Copemann said.

Anyanwu, who is in her 14th year in the classroom, teaches in Prince George’s County but her children attend Howard County schools. She said the quality of education should not vary by ZIP code.

“Every child should have the same opportunities,” she said. “Every child should be 21st-century ready. If we’re wanting to prepare our students, then we should invest the money to make sure they have what they need to be successful.”

Kenyelle Thigpen, a senior at City Neighbors High School in Baltimore, expressed hope that Monday’s rally, one of the largest gatherings in recent years, would sway state legislators, who are crafting the state’s fiscal 2020 budget now.

A lack of funding “impacts our air conditioning, our heat, the lack of books that we have. It impacts everything,” she said.

Blueprint board reviews how to assess whether state and local officials execute multi-billion-dollar education plan.