Marc B. Elrich (D) romped to victory over two opponents in the race for Montgomery County executive on Tuesday, winning by a much wider margin than analysts anticipated.

Elrich, a member of the County Council since 2006, captured 64 percent of the vote.

Council member Nancy M. Floreen, a lifelong Democrat who became an independent in August, attracted 19 percent of the vote.

Elrich was one of two new executives elected Tuesday in the counties that border on Washington, D.C. In Prince George’s County, State’s Attorney Angela D. Alsobrooks (D) was unopposed in her bid for county executive.

At his victory party at the Silver Spring Civic Center, Elrich said he’s always tried to think like an activist with an ever-forward attitude in public office.

“I’ve always seen myself, frankly, as an activist. Always. I’m always a community member. And I’m always an activist. I’m always doing your work,” Elrich said. “I was never willing to transition to be the politician who was detached from the day-to-day struggles.”

Development was a key issue in the race, with Elrich and Floreen frequently skirmishing over whether developers adequately fund the roads and schools that are needed to support residential and commercial construction.

Elrich ran with the backing of progressive groups and the county’s labor unions. He spent much of the campaign fending off attacks from Floreen — and a Super PAC supporting her candidacy — that he was too extreme to serve as executive.

Another Super PAC formed over the summer to hammer Floreen for her reliance on funding from developers and other business interests.

Elrich won while participating in the county’s new public financing system, which limited the size of the contributions he could accept in exchange for substantial matching funds.

During his speech Tuesday night, Elrich sketched out a bold agenda and also joked about his “landslide” victory in the Democratic primary, which he won by 77 votes.

In an interview, Elrich said he felt gratified by his considerably wider margin in the general election.

Floreen, who was hoping to become the first woman ever elected executive in Maryland’s largest subdivision, was undefeated until her loss to Elrich, having won nine straight primary and general elections. 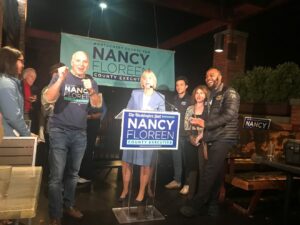 In a concession speech to supporters at Matchbox Restaurant in Rockville, she said, “I want to wish Marc Elrich the best. I wish him well and I wish Montgomery County the best. This has been a great campaign and I want to thank again all of you who have contributed to making this a great experience for so many residents to engage and to make our community better.”

Ficker, who served in the House of Delegates from 1979 to 1983, was a dominant factor in debates, with his booming voice and colorful style, but his decades of quirky behavior appeared to undermine his candidacy.  Democrats hold a huge voter registration advantage in Montgomery

Alsobrooks made history on Tuesday, when she skated to an uncontested victory in the race for county executive, becoming the first woman ever elected to the post.

Her win in the overwhelmingly Democratic county was secured in August when her opponent, Jerry Mathis (R), withdrew from the contest and endorsed Alsobrooks. The move prompted GOP leaders to accuse Mathis of cutting a deal with the Democrat, a charge he denied.

Speaking to supporters on Tuesday, Alsobrooks pledged to make education her signature issue.

“To every child in Prince George’s County, I want them to hear me very loudly and clearly: Your education is the single most important priority of this administration,” she said.

She called education “the civil rights issue of this time and we will treat it that way.”

“It doesn’t matter your ZIP code, whether your parents attended school or no, whether you have been here 47 years like me or 47 days, every child in every family in this community is important to me and important to this administration.”

A two-term prosecutor who is considered a rising star among Maryland Democrats, Alsobrooks will succeed a close ally, incumbent Rushern L. Baker III in December. She brushed aside questions about her long-term future, saying she is focused on the upcoming transition.