Republicans were far more low-key following the closely watched Senate action, which followed weeks of bitter acrimony on Capitol Hill and beyond.

The Senate’s vote to confirm Kavanaugh, a Montgomery County resident, broke largely along party lines. He was sworn in by Chief Justice John Roberts hours.

Trump chose the 53-year-old appeals court judge from a list prepared by the right-leaning Federalist Society, and his addition to the court, in the seat once held by frequent swing vote Anthony M. Kennedy is expected to move the court to the right for decades to come. 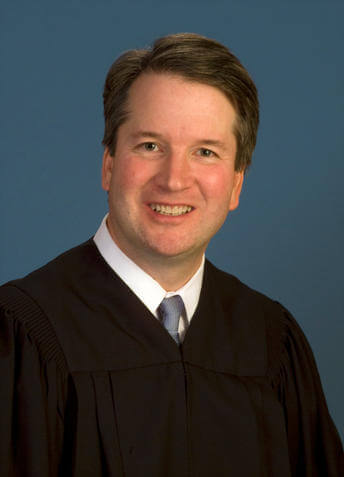 U.S. Sen. Benjamin L. Cardin (D) reflected the downcast mood of many on the left when he called the vote “a difficult day for the country.”

“For those of us who believe Judge Kavanaugh lacks the impartiality and judicial temperament to serve on our nation’s highest court – and who fear how his opinions will shape the future of reproductive rights, health care, and other key issues – it is easy and understandable to feel disheartened,” Cardin said in a statement.

“What’s more, these past few weeks I have heard from many brave survivors of sexual assault, and for them, I know today isn’t just difficult. It’s painful. I share these sentiments. I am profoundly disappointed in the outcome of today’s vote.”

“Any remaining hope that Judge Kavanaugh could be trusted to be an impartial justice was shattered by his opening statement at his last hearing,” Van Hollen said. “When confronted with credible and deeply concerning allegations of sexual assault, Judge Kavanaugh launched into an ultra-partisan diatribe and wild conspiracy theories that showed a total lack of the temperament and trustworthiness needed in a Supreme Court Justice.

“I’ve had over 50 Marylanders send me written testimonials about the sexual abuse that they encountered,” he added. “I thank them for their courage, and I promise to keep speaking out on this critical issue.”

“There is no question that today’s rush to vote without a complete investigation has tarnished both the Supreme Court and the United States Senate. But the outpouring of engagement from people in Maryland and across the country is what will continue to push our nation to become a more perfect union. Working together, we will succeed.”

“Today is a deeply frustrating and unsettling moment in our nation’s history – a day when the voices of tens of millions of Americans, and so many survivors of sexual assault, were ignored so that one party could further politicize the highest court in our land,” he said.

“It was a clear repudiation of a country calling out for gender equality and cultural change.

“This new, more conservative court will put Roe v. Wade in jeopardy, further rig our economy in favor of the billionaires and giant corporations, strip away voting rights, and tear apart the Affordable Care Act. Generations of Marylanders will be harmed by this new court’s reckless conservative ideology.”

He attempted to draw a contrast with his November rival, Gov. Lawrence J. Hogan Jr. (R).

“The people of our state and our nation will not forget who ignored their voices and refused to stand in opposition to Brett Kavanaugh’s confirmation, including Larry Hogan.”

Rep. Andrew P. Harris, the only Republican member of the state’s congressional delegation, did not respond to a reporter’s request for comment. On Facebook, he offered a modest statement.

“I am proud of my colleagues in the Senate for their decision to confirm Judge Brett Kavanaugh to be the next associate justice on the United States Supreme Court,” he wrote. “Congratulations, Judge Kavanaugh.”

David J. Trone (D), a candidate for the 6th District congressional seat being vacated by Rep. John K. Delaney (D), posted a statement on Facebook that appeared to fault Trump for comments he made at a rally in Mississippi this week.

“Ignoring, belittling, and mocking victims of sexual assault is wrong. Kavanaugh lacks the temperament to sit on the Supreme Court and his appointment brings a new era of partisanship to Washington. We must rise against this and make sure we vote on November 6th.”

After earlier cancellation, Cecil Public Media debate is back on with three candidates scheduled to attend.