The singular and pioneering 30-year political career of Isiah Leggett (D) is drawing to a close – after a dozen years as Montgomery County executive, two years as chairman of the Maryland Democratic Party, and 16 years on the County Council. So let the parade of tributes begin.

The first stop was a dinner Thursday night sponsored by the Women’s Democratic Club of Montgomery County.

“I feel like this is just one of a continuing sequence of tributes to Ike Leggett that we will be attending this year and maybe for years to come,” Rep. Jamie Raskin (D) told 200 Democrats at the Bethesda Marriott. 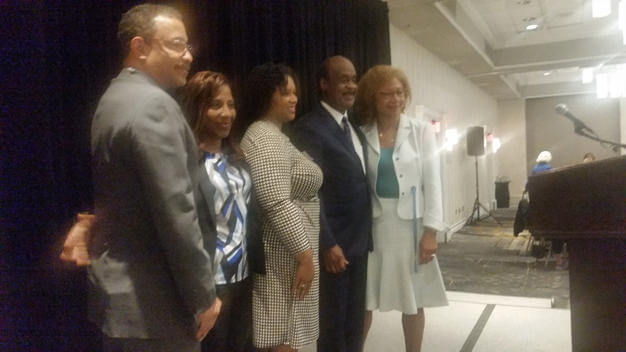 Montgomery County Executive Isiah Leggett (second from right) poses with his family after a dinner in his honor Thursday sponsored by the Women’s Democratic Club of Montgomery County. Photo by Josh Kurtz

In an interview after Thursday night’s dinner, Leggett said there have literally been dozens of events proposed in his and his wife Catherine’s honor – some that will fill theaters and ballrooms, others being offered by churches, fraternal organizations and community groups. His third term as county executive ends in early December.

Thursday’s event featured speeches by Leggett’s family and a galaxy of Democratic stars, and served as a rallying cry for party activists. Again and again, speakers contrasted the mild-mannered Leggett, a consummate conciliator, deal-maker and strategic thinker, with the current occupant of the White House.

“When I think of Ike’s qualities, I think of the extreme opposite of what we see at 1600 Pennsylvania Avenue,” said U.S. Sen. Chris Van Hollen (D).

Added state Attorney General Brian E. Frosh (D): “I feel like Ike Leggett has been an extraordinary force for love, which is why we love Ike Leggett.”

Montgomery County Councilman Marc B. Elrich, the Democratic nominee to succeed Leggett, called Leggett “the best leader this county has ever had.” And while Elrich, a full-throated progressive, has occasionally had an uneasy relationship with the local Democratic establishment, he used Thursday night’s event, and his links to Leggett, to provide assurances.

“I’m in his tradition, in his footsteps, and I’m going to carry the load that he hands off to the next county executive,” Elrich said.

Prince George’s County Executive Rushern L. Baker III (D), who has considered Leggett a mentor throughout his political career, described first meeting “Dean Leggett” when he was a law student at Howard University and Leggett was a professor and administrator there. He accompanied a friend to a torts class that Leggett was teaching.

“I was immediately frightened, and I said, ‘I hope I never see that man again,’” Baker recalled.

Leggett’s sister, Dr. Susan Leggett-Johnson, an area physician and the youngest of Leggett’s 12 siblings (the county executive is No. 7 of 13), recalled their humble roots in Alexandria, La., and said the grit of their mother, who worked as a short-order cook, fueled their ambitions. She had never known an African-American doctor, and her brother had never known a black lawyer.

Catherine Leggett also met her husband at Howard Law – when she was in her first year and he was in his third, and they found themselves in the same study group.

“He was brilliant. We all admired how smart he was,” she said. “Literally, I fell in love with his mind, right then and there. He was so brilliant. Here is a man who is smart, loveable, knowledgeable, caring and giving.”

Because Leggett is so soft-spoken, he is occasionally underestimated, his wife said.

“Do not think that this quiet, humble man is not thinking,” she said. “He’s thinking ahead of you. He has strategized. And he will know the answers for sure.”

Catherine Leggett also observed that her 74-year-old husband, who works round-the-clock, isn’t sure what he’s going to do next.

“He says he is going to take the time to breathe and relax and do nothing…I don’t know what I’m going to do with him. I can’t fathom that.”

After thanking the assembled leaders and activists, many of whom were early supporters, Ike Leggett mused about his reluctance to first run for office in Montgomery County. As he sought a County Council at-large seat, he was hesitant to put his photograph on campaign literature.

“We’re not sure that the county is ready for this,” Leggett recalled him and his campaign manager thinking. “That was in ’86.”

But even though his race has occasionally been an issue on the campaign trail and in public life, he said he’s proud that the county has embraced his leadership. He praised “the goodness, the kindness, the fairness and the generosity of the people of Montgomery County. I have run seven races in the county, and I have never had a close challenge.”

But mostly, Leggett wanted to talk about how scholarships helped him pursue his educational and professional goals. When he was a student at Southern University, congregants at a church held a fundraiser for Leggett and two other students. They raised $37. It didn’t sound like a lot, but it was a substantial sum to the people who dug deep, and Leggett was moved.

Later, Leggett approached a Louisiana state senator and asked for a state scholarship. Although the senator was skeptical, because Southern University was a historically black college, he ultimately relented. Years later, recalled, the senator “took credit for all my success.”

“Those two scholarships have driven me most of my life to do the things that I’ve been able to do,” Leggett said.

And with that, he made a pitch for the next big Leggett tribute: A celebration on Sept. 23 at Strathmore Hall being called the Leggett Legacy Forward Event, which will serve as a fundraiser for the Catherine and Isiah “Ike” Leggett Scholarship, to aid students at Montgomery College and the Universities of Maryland at Shady Grove. Leggett said he and his wife have received funding commitments of almost $1 million.

“You’ll see people you know there – people who might surprise you,” Leggett told Maryland Matters slyly.