Vignarajah, 38, a one-time policy director to Michelle Obama now residing in Montgomery County, appeared to have picked Blake at the last minute, fueling speculation all day long that she would drop out of the race. But, late in the afternoon, she surfaced and filed with her lieutenant governor candidate at the Maryland State Board of Elections in Annapolis. 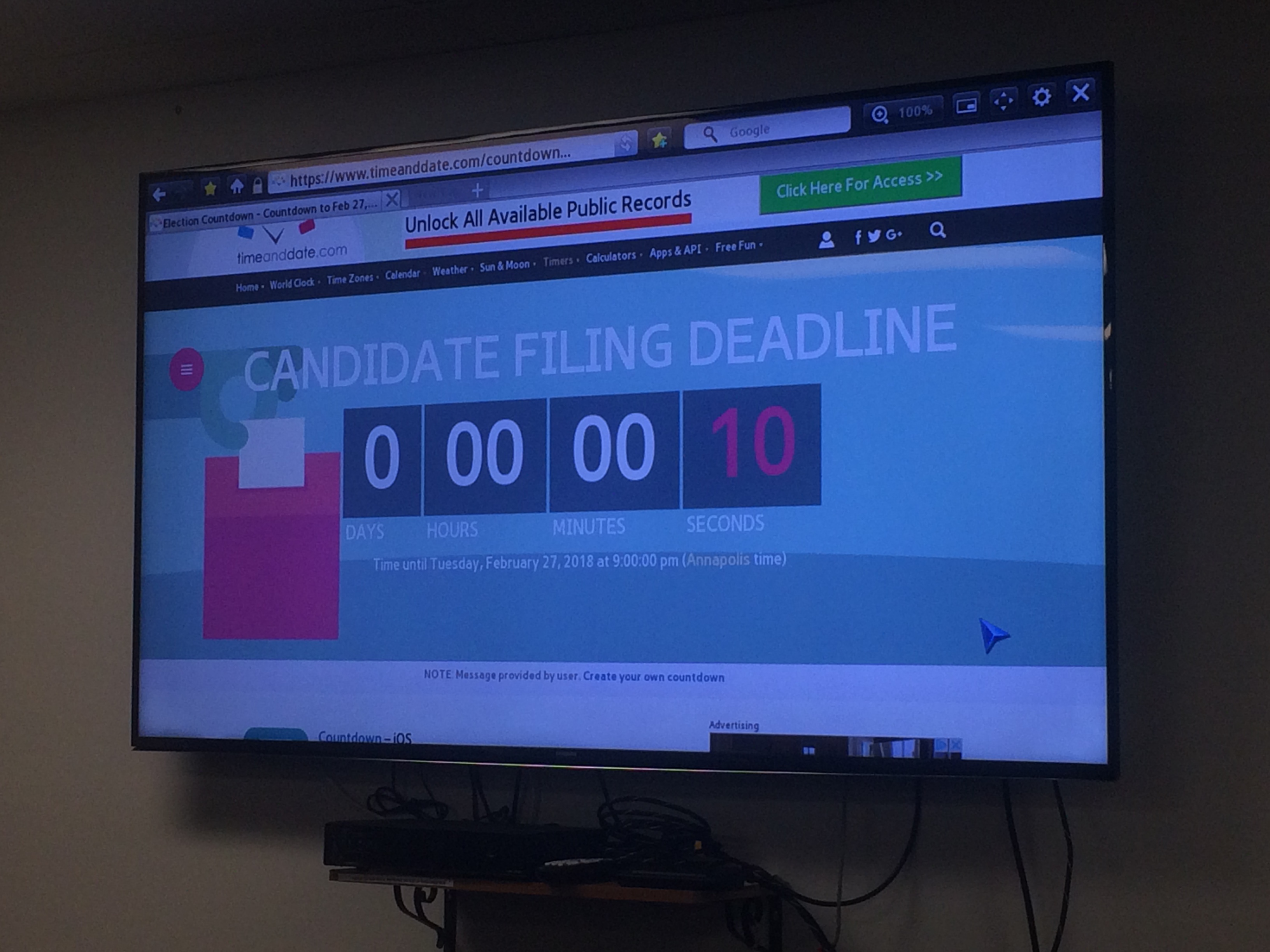 A countdown clock in the State Board of Elections headquarters in Annapolis tells the story Tuesday night. Photo by William F. Zorzi.

Vignarajah filed as “Krish O’Mara Vignarajah.” She is married to Collin O’Mara, president and CEO of the National Wildlife Federation.

The Vignarajah-Blake team, which bills itself as “Krish & Sharon for Maryland,” is making public education central to their campaign. Both were educated in Maryland public schools – Vignarajah in Baltimore County and Blake in Prince George’s County.

“Prioritizing education and our children is key to addressing and solving issues facing Maryland,” Blake said in a statement released after they filed. “Where does it all start? In our schools. Maryland’s children are our future, and our state budget and priorities must reflect that.”

Blake, 67, who resides in Baltimore County, is a virtual unknown in statewide politics, having spent most of her career as a teacher in Baltimore City classrooms and in the latter years, at the helm of the BTU.

She has, however, served on a variety of statewide educational boards, including the “Safe Schools Interagency Steering Committee and the Visionary Panel for Better Schools, according to the team’s statement.

The pair also is stressing that they both are “women of color.” Vignarajah was born in Sri Lanka and Blake is African American.

“America is changing, and our leadership must reflect that,” Blake said in the campaign statement. “Krish and I are making history for women, and women of color, in Maryland and across the nation.”

In the last campaign finance report filed last month with the state elections board, the Vignarajah campaign reported having $288,861.81 in cash on hand, including a $100,000 loan from the candidate herself.

Another pair of last-minute Democratic filers for governor and lieutenant governor late Tuesday were from Baltimore, James Jones and his running mate, Charles S. Waters. Nothing could be learned about the Jones-Waters ticket Tuesday night.

Meanwhile Tuesday, followers, employees and campaign workers for Maryland Comptroller Peter V.R. Franchot, 70, breathed a collective sigh of relief, when no one ended up filing to challenge the Montgomery County Democrat in the primary.

In the run-up to the filing deadline, speculation about the comptroller’s race was rampant, as some state Democratic leaders frustrated by Franchot’s coziness with Hogan in recent years pushed, coddled and cajoled possible challengers behind the scenes. In the end, however, no one apparently was convinced of winning such a race.

Franchot faces Republican Anjail Reed Phukan, 39, an accountant who resides in Ocean City, in the Nov. 6 general election. She, too, is a virtual unknown.

Picture this: Portraits of Peter Franchot, Thurgood Marshall unveiled on the same day in Annapolis

With high-ranking state officials moving on and a new generation of leaders coming in, it’s one of the telltale signs of the peaceful transfer of power.